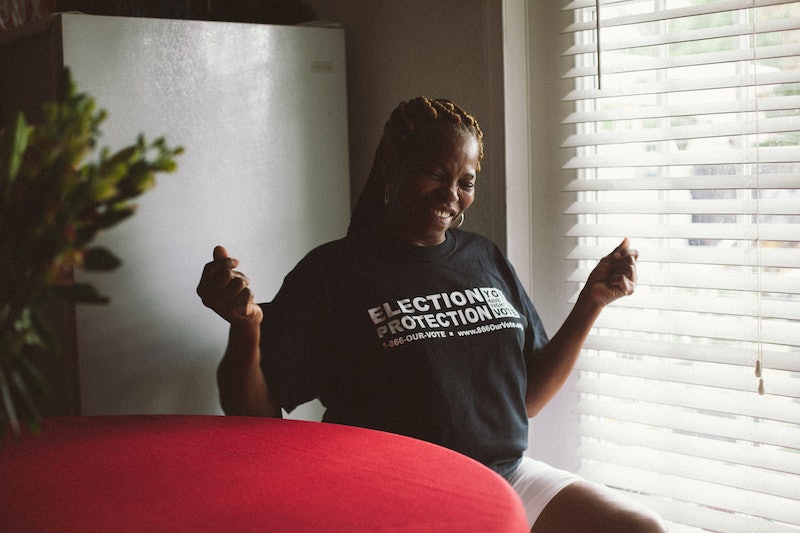 In this op-ed, Kelsey Aroian, the co-founder of a creative studio that produced the "Blocked From the Ballot" project, explores Florida's Amendment 4, a felon voting rights initiative that would restore the right to vote to people who have been convicted of a non-violent felony and completed their sentence.

I live in Oakland, California. I run my own business, I pay my taxes, I try to contribute to my local community in the ways I know how. On Nov. 6, the day of the midterm elections, I will wake up and walk half a block to the small church on the corner of my street and cast my vote. It will be a quick and easy act of civic duty — no superfluous ID requirements and little to no line. If I make a last-minute decision to go out of town, I have a vote-by-mail packet sitting on my dresser.

Yraida Guanipa lives in Miami, Florida. She runs her own business, pays her taxes, supports her family, and does immense work in her local community. On Nov. 6, Yraida will wake up and be completely barred from casting a vote anywhere in her state. Yraida hasn’t been able to vote since 1996. Unlike me, Yraida can’t participate in our democracy for two key reasons: She lives in Florida, and she has a felony conviction.

Yraida served a 15-year prison sentence and completed her parole and probation. Despite paying her debt in full, she’s been unable to regain the full breadth of her civil rights.

She’s far from alone. Over 6 million U.S. citizens are denied their right to vote due to felony disenfranchisement. The epicenter of today’s fight for voting rights restoration is Florida, where disenfranchisement laws there are the harshest in the country. In Florida, 10 percent of the adult population is prohibited from voting due to a prior felony conviction. One in five African Americans of voting age cannot cast a ballot.

At the heart of this effort is a belief that everyone deserves a second chance.

However, on Nov. 6, Floridians have an opportunity to approve a ballot referendum that would automatically restore voting rights to 1.4 million people who were convicted of non-violent crimes. If passed, Amendment 4 (the Voting Rights Restoration for Felons Initiative) would be the greatest act of enfranchisement in decades.

This summer, my creative studio had the honor of producing a project about the people who have been disenfranchised in Florida or are on the front lines fighting for the right to vote. Five of us collaborated on a project called Blocked From The Ballot, an ongoing photo and interview series about voting rights in America. Our first stop was to visit Yraida, who I tracked down on Facebook after reading about her long fight for rights in an NPR interview.

Photographer Aundre Larrow and I flew to Florida and spent weeks criss-crossing the Sunshine State in crappy rental cars to meet with with others closely affected by these laws. For our project launch, we profiled eight very different people in Florida to shed light on the modern issues of disenfranchisement and to amplify the stories of those without a voice. At the heart of this effort is a belief that everyone deserves a second chance. We believe we must return the eligibility to vote to all people who have done their time and paid their debts. These people are our family members, friends, and neighbors and have earned the right to fully participate and give back to their communities.

The full story of voting rights in America is a revealing and unjust tale about democracy and civil rights in America. Over the past two centuries, there's been a devastating pendulum swing from restoration to backlash — from the Reconstruction Era to Jim Crow and the passage of the Voting Rights Act in 1965 to the eventual gutting of its many protective provisions by the Supreme Court.

It’s more than just felon disenfranchisement. Today, voting rights are under attack nationwide as states continue to engage in many forms of voter suppression. Obstacles to registration, illegal voter purging, and new voter identification requirements are making electoral participation harder than ever. These laws, as we know, disproportionately affect people of color.

We think Florida’s Amendment 4, which would re-enfranchise 1.4 million people, is one of the most impactful things on the midterm ballot and has the capacity to reshape the electorate in a very important swing state. At the core, our project is about our belief that voting is not a political issue. It is our most basic democratic right as citizens.

We set out to show that Amendment 4 would affect real people — people of all races, gender, political parties, and walks of life. Amendment 4 needs 60 percent approval from voters to pass, meaning it will need people from both sides of the aisle to come together as equals.

Blocked from the Ballot attempts to tell the stories of the actual people behind the staggering statistics. As storytellers and creatives, we hope stories like Yraida’s provide understanding and empathy about folks who are wildly different and yet one in the same: United States citizens who deserve a voice on Election Day. If you live in Florida, please think about how you’ll vote on Amendment 4.