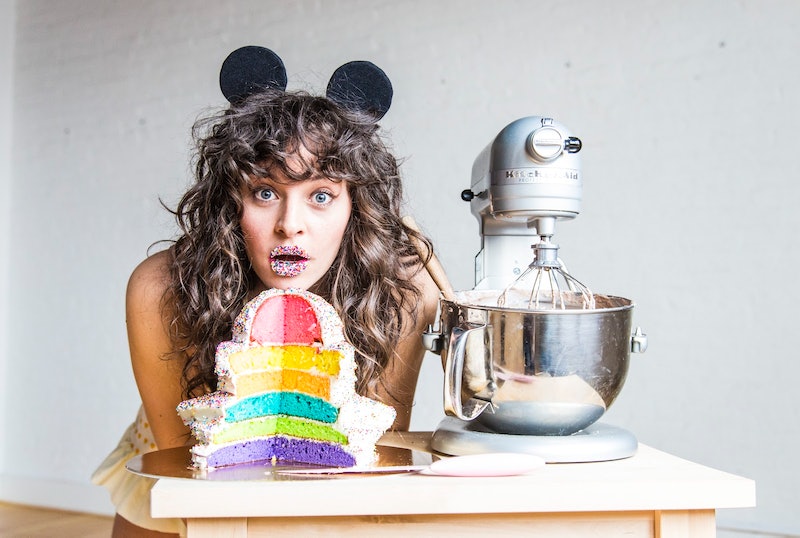 In Bustle's Quick Question, we ask women leaders all about advice — from the best guidance they've ever gotten, to what they're still figuring out. Here, Flour Shop founder Amirah Kassem tells Bustle about getting business advice that massively backfired, creating strong team culture, and living the birthday lifestyle.

Growing up in Juárez, Mexico, Flour Shop founder Amirah Kassem loved how her neighbors’ houses might be green, yellow, pink, or otherwise bursting with color. Kassem tells Bustle she cemented her love of color (and learned to bake) when her mom had her melt crayons into a tin to recycle them while she’d bake treats for school. The convergence of these influences becomes very clear if you’ve ever been to her bakery or seen one of Kassem’s Instagram-famous “explosion cakes” — you know, the rainbow, six-layer cakes that ooze sprinkles when you take a monster slice out, like candy out of a piñata? Today, Kassem is a professional ambassador of “the birthday lifestyle,” as she calls it, where a never-ending parade of rainbow, glitter, sprinkles encourages Flour Shop customers to live every day like it’s their birthday.

Yes, as a small business owner, Kassem still has to buckle down and get to work in order to grow her business. But she does it in her signature style.

“People ask me, ‘What’s your sign’? I say, ‘Unicorn’,” she tells me in a conference room at Bustle’s New York City headquarters. That’s Flour-Shop speak for Capricorn, which she embodies to a tee. “I'm one of those people that when I would have one thing for homework, I would put it off. But when I had a ton of homework, I'd do it in a heartbeat.”

Right now, Kassem has a ton of proverbial homework. She just released her first children’s book, The Magical Land of Birthdays, in October. She’s promoting a holiday version of her famous explosion cake, sold as a DIY kit from Williams-Sonoma. Flour Shop’s first collection for Pottery Barn launched on Dec. 12; comprising bedding, décor, and more, the prevailing theme is Kassem's love for rainbows, which show up on a bedspread set, in pompoms on a winking unicorn pillow, and in a oblong "magic rug." And, she’s gearing up for the launch of the second IRL Flour Shop, in a location that's not yet been revealed to the public.

“There's so many projects going on and I just can't wait to do them all,” she tells me.

But it takes more than an infectiously positive attitude to keep a business going. Here, Kassem tells me, along with an audience at Bustle's headquarters, about her upcoming projects, the fake email she made to chase down invoices, and what it's like being the boss lady of birthdays.

What was the best piece of advice you received when you started your business?

It's funny because I think the best piece of advice that I received was actually coming from an opposite mindset. When I told people I wanted to open a shop, every single person asked me, “Have you seen what other people are charging? Have you seen what other people’s boxes look like?” I was like, “You're all thinking the same.” Not once did I go into another bakery. I don't know how much any other bakery charges. I don't know what other bakery boxes do. I wanted mine to be able to open a certain way so that you don't have to reach in to get your cake — I want you to slide your cake out. Now, we’re the only ones who have this kind of box. But I wouldn't have thought of that had I been comparing what I wanted to do to what everyone else was doing. My advice back would be to do the complete opposite of what people are asking.

Who do you go to for guidance or mentorship?

Willy Wonka. He never calls me back, but I really try. My husband, CEO Ross Harrow, is actually the other side of Flour Shop. He runs all of the operations. I love that we have such completely opposite roles where he has no idea what I do day to day, and I have no idea what he's looking at in an Excel spreadsheet. But when I do need advice, I can go to him because can give me advice that's different from what me or my right hand, Lacey Watts, would think.

Before you started working with your husband, what was it like getting Flour Shop’s finances off the ground?

I was really terrible at it. Someone would ask for a cake and I’d get so wrapped up in doing it, I would forget to actually send an invoice. Then I would send an invoice and not hear back, and I’d be like, “Well, I don’t want them to think I’m after them,” so I wouldn’t follow up. It was actually a huge struggle. So I made a fake email called “Dough Collector” and the dough collector was really mean. I was really nice. I created a press email, and the press and the dough collector would complain about each other, but it was actually all me. You could email anyone in the company and it was all me. The whole fake it till you make it thing was really accurate for me. Bake it till you make it.

Oh my gosh. Today alone? Today, I'm here, then I'm going to Rachel Ray. I have a big event at Williams-Sonoma tomorrow because we're launching our holiday cake kit, which I'm really excited about. It's the cover of the Williams-Sonoma catalogue. The holidays are one of my favorite times because I feel like everyone decides to embrace the fact that there can be glitter and Christmas lights, but it’s also that crunch time where everyone's about to leave the office.

How do you inspire your staff to have your same positive outlook as you have?

This may sound negative coming from a business owner, but we look to hire people who aren’t necessarily the most qualified, but the people who want to be there the most. I can hire the world's most skilled baker and they can just be mad all day, poisoning everyone around them. I've hired people who are in college and literally have zero experience, but they really want to work there — and they’ve turned out to be some of my best employees because they wanted to learn. A kitchen works so closely together that anytime there is a bad apple, that's hard for me. And then I don’t love that whole desk vibe, so there’s always Drake in the background. We work on inspiring quotes, or playing funny games. I like to encourage an environment where everything is colorful, even our bathroom — it’s not just the store. You come into our kitchen and everyone’s dancing.

Any last words of advice?

More like this
Savannah Guthrie Got Her First-Ever Tattoo With This Former Wild Child
By Suzanne Zuckerman
The 6 Best Sunglasses For Snow
By Lauren Moison
These Are The Fastest Electric Kettles You Can Buy
By Margeaux Baulch Klein
45 Comfy, Cheap Outfits From Amazon That Look Actually Expensive
By Claire Epting
Get Even More From Bustle — Sign Up For The Newsletter
From hair trends to relationship advice, our daily newsletter has everything you need to sound like a person who’s on TikTok, even if you aren’t.