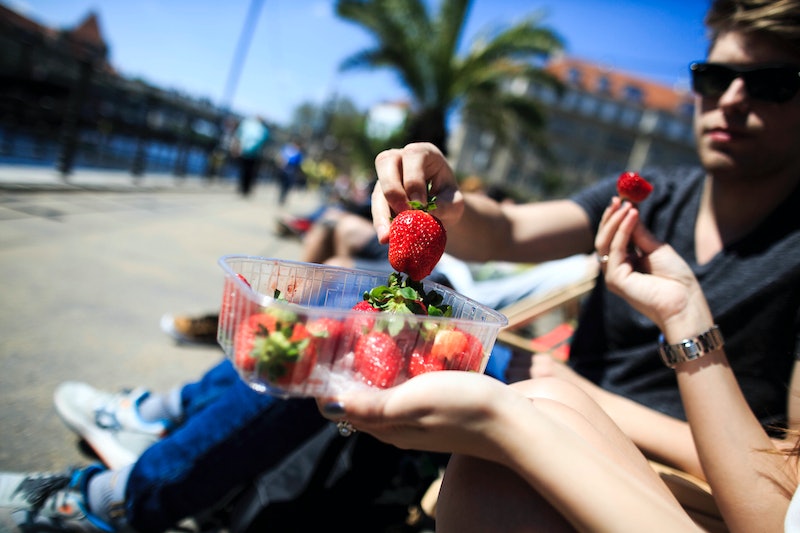 The food you put in your body can have profound implications on your health. Consistently eating fresh, nutrient-rich food can decrease your risk of developing certain diseases, while consuming too much sugary or processed food increases those risks. But one barrier to eating fresh food like fruits and vegetables is that they're often higher in cost than less nutritious food, and it turns out that the cost of food itself can seriously mess with American's health. A new study looked at how lowering the costs of healthy foods and additional taxes on unhealthy foods could impact the death rate from diabetes, heart disease, or stroke in the United States, and what they found was startling.

The study, which was published in BMC Medicine, found that changing the price of seven foods, including fruits, vegetables, and sugar-sweetened beverages, could reduce deaths due to stroke, diabetes, and cardiovascular disease and address health disparities due to socioeconomic status in the United States.

The researchers found that if the seven food items’ prices were altered by 10 percent each, approximately 23,000 deaths could be prevented per year. That’s 3.4 percent of all cardiometabolic disease (aka, diabetes, heart disease, and stroke) deaths in the United States. Additionally, a 30 percent change in prices would almost triple the positive impact with approximately 63,000 (9.2 percent of all cardiometabolic disease deaths) prevented deaths per year, according to the study's analysis.

"This is the first time, to our knowledge, that national data sets have been pooled and analyzed to investigate the influence of food subsidies and taxes on disparities in cardiometabolic deaths in the United States," said lead and corresponding author José L. Peñalvo, Ph.D., adjunct assistant professor at the Friedman School of Nutrition Science and Policy at Tufts University, in a press release. "We found that modest price changes on healthy and unhealthy foods would help decrease overall cardiometabolic deaths and also reduce disparities between socioeconomic strata in the U.S. — the largest changes coming from reducing the prices of fruits and vegetables and increasing the price of sugary drinks." The seven foods, total, that were looked at were fruits, vegetables, whole grains, nuts/seeds, processed meat, unprocessed red meats, and sugar-sweetened beverages.

While cheaper fruits and vegetables isn’t likely to draw criticism, some policy analysts and activists have spoken out against raising the prices of soda and other sugary drinks, citing that it’s an inherently regressive tax on low-income people. "A tax on soda and juice drinks would disproportionately increase taxes on low-income families,” Senator Bernie Sanders told Philly Mag in 2016.

This study also looked at educational attainment and socioeconomic status and found larger proportions of deaths would be prevented among Americans with less than high school or high school education, compared to college graduates. In the United States, low-income people are more likely to be those without college degrees. According to the United States Census Bureau, 29 percent of people without a high school diploma lived in poverty, while only 5 percent of people with a Bachelor's degree lived in poverty. The poverty rate for folks who graduated high school but never attended college was also in the double digits. "Our findings on disparities are particularly relevant today, with growing inequities in diet and cardiometabolic disease. The current strategies, such as education campaigns or food labeling, have improved overall dietary habits, but much less so among people with lower socioeconomic status," said senior author Dariush Mozaffarian, M.D., Dr.P.H.

By using nationally-representative data from 2012 on the consumption of selected food items by age, gender and socioeconomic status, researchers were able to observe the largest proportional decrease in stroke, followed closely by diabetes. The reduction of death caused by diabetes can be attributed to the taxes on sugar-sweetened beverages, while subsidies on fruits and vegetable played a large role in the decrease in deaths from strokes. "These results suggest that financial incentives to purchase healthy food, and disincentives to purchase unhealthy foods, can prove successful in meaningfully reducing cardiometabolic disease disparities," Mozaffarian said.

This study is a reminder of how small lifestyle changes can have a huge affect on health outcomes, but that those lifestyle choices aren't always accessible to everyone.