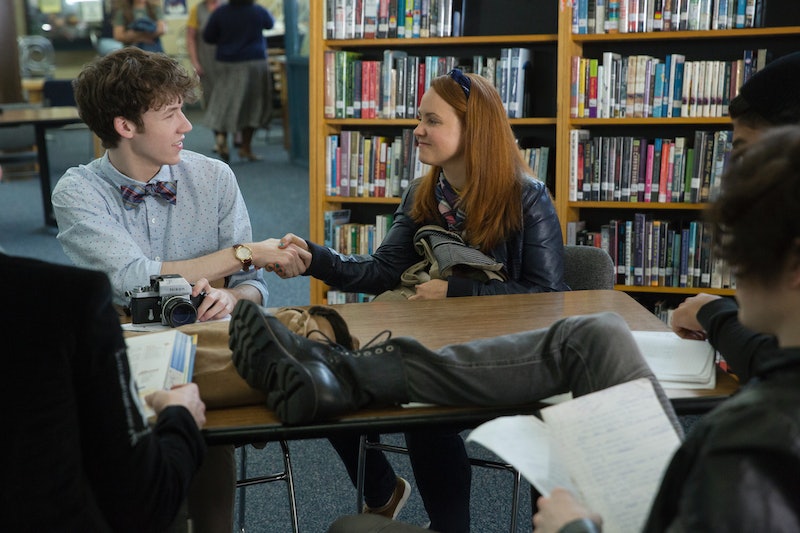 Please don't misunderstand me: Gun violence is an epidemic in the United States. There has been one school shooting every week of this year so far. The second season came out on the very same day that ten people were shot and killed at a Santa Fe high school. We need to talk about this, think about this, and watch thoughtful depictions of this. Here's what we don't need: Gun violence tossed into YA shows as a lazy plot point, used only to up the ante and double down on harmful stereotypes.

13 Reasons Why essentially uses the very real horror of gun violence to raise viewing figures as much as possible.

Let's take a look at Tyler. The awkward photographer had a rough run of it in Season 1, and things only get worse in Season 2. The kid has been tormented by his peers, mocked by the girl he likes, exposed by a viral naked photo, and shunned by even the school's resident "nice guy" (Clay). Is it any surprise that he feels driven to shoot up the whole place?

Well, yes, actually. The bullied-loner-turned-school-shooter is a trope that first took hold after the Columbine High School massacre, and it's been challenged over and over by experts in the years since. Your average school shooter is as likely to be prom king as an outcast (as we saw in Santa Fe, where the gunman was well-liked). And when we buy into this myth, we implicitly place the blame for the act on the shooters' classmates. As Parkland survivor Isabelle Robinson writes in her op-ed "I Tried to Befriend Nikolas Cruz. He Still Killed My Friends" for The New York Times: "No amount of kindness or compassion alone would have changed the person that Nikolas Cruz is and was."

She's right. And by making Tyler a victim of his classmates, rather than making his classmates victims of his planned actions, 13 Reasons Why fails to address the actual reason America is plagued by school shootings: A lack of common-sense gun control. To quote Robinson's op-ed: "That is a weak excuse for the failures of our school system, our government and our gun laws."

Throughout the spectacle that is Season 2 of 13 Reasons Why, gun violence is thrown at random into the storyline to raise the stakes. In the two-minute teaser trailer alone, there are at least three references to gun violence. A teaser trailer, to be clear, is intended to tease viewers — to intrigue them to the point that they decide to watch the show.

Without giving too much away, the bleak specter of Tyler's mass shooting plan hangs over nearly every episode of Season 2, providing the viewer with a reason to tune into the next episode — and the next, and the next. It's not until the final episode of the season that we discover what Tyler actually does, meaning that 13 Reasons Why essentially uses the very real horror of gun violence to raise viewing figures as much as possible, and also to set up a cliffhanger that could lead to a potential Season 3.

That's just my take, of course. Showrunner Brian Yorkey would disagree, explaining the thinking behind Tyler's Season 2 storyline in an interview with INSIDER: "It's been really remarkable to watch these incredible Parkland students take the conversation forward and carry it when no one else will." Yorkey added: "Our hope is that Tyler's story in Season 2 will be part of that ongoing conversation."

It's highly unlikely that an act of kindness towards a would-be school shooter will stop him.

These vague references to the "ongoing conversation" mask the facts: That it's highly unlikely that an act of kindness towards a to-be school shooter will stop him. (And, yes, it's almost always a him.) That your average school shooter is as likely to resemble Clay as Tyler. That we've being having "conversations" about what causes school shootings for years, and we already know the answer — access to guns — and yet 13 Reasons Why is about to tell a generation of young people that, actually, it's bullying that drives someone to shoot up a school.

The writers' decision to interject gun violence in 13 Reasons Why is objectively bad, and it's also just plain tacky. Tyler stockpiling guns was not in the novel on which the TV series is based. In fact, Jay Asher's novel doesn't touch on gun violence at all. Asher provided high-stakes drama aplenty without once needing to toss in gun violence as a plot point — and the show would have done well to remember this.

I'll lay off this show for a minute to point out this obvious: 13 Reasons Why isn't the first show to commodify and cheapen the uniquely American threat of school shootings. The bullied loner in One Tree Hill tried to shoot up his high school. Degrassi and 7th Heaven touched on the issue. It also cropped up in American Horror Story, Buffy The Vampire Slayer, and Glee.

As a Brit, I'm struck by this in a way I'm not convinced American audiences are. Growing up in England, not even our police carry guns. You can't write a school shooting scene into a British TV show — it wouldn't feel believable. It's not that there is any absence of violence in British TV: Young people are stabbed, hanged, choked, you name it. It's that it's hard to kill off a fictional character without a gun. As a writer, I'd imagine you have to really think about it.

I understand that 13 Reasons Why had a lot to live up to. The first season of 13 Reasons Why, like the book that season was based on, was a mammoth success. But it's hard not to see the school shooting plotline in Season 2 as anything more than a cheap attempt to keep viewers watching.

More like this
The 'Black Bird' Stars Are Both Heading Back To Apple TV+
By Brad Witter
'The Capture' Is Finally Back – & S2 Looks Tense AF
By Sophie McEvoy and El Hunt
Dr. Anna Pou Is Still Practicing Medicine After Facing Murder Charges
By Brad Witter
'Children of the Underground' Subject Faye Yager Now Runs A North Carolina B&B
By Brad Witter
Get Even More From Bustle — Sign Up For The Newsletter