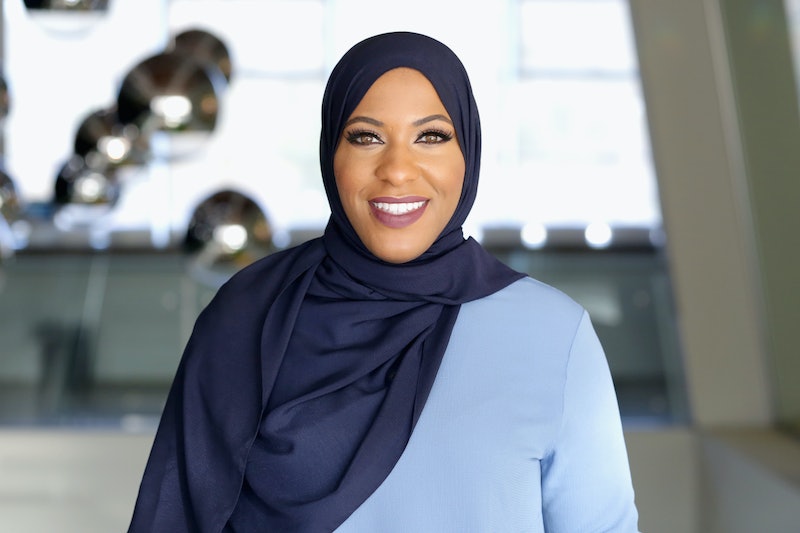 Ibtihaj Muhammad is a trailblazer in every sense of the word. Not only did she win a bronze medal in the 2016 Olympics in Rio for fencing, but she was the first Muslim woman to represent the United States while wearing a hijab. Now, with a Barbie doll modeled after her and a spot on TIME's list of "The 100 Most Influential People" in 2016, Muhammad is hoping to use her visibility to encourage Muslim women to find a sport they love. And for her, fencing represents the perfect marriage of her athleticism and faith. Bustle caught up with Muhammad at a press event for Nike in Paris, where she revealed how faith has played a major role in her career.

"When I was playing sports [...] it was tough because as a kid who wore a hijab, I was always changing the uniform, adding long sleeves, or adding pants to the uniform in order to make it adherent to my faith," she tells Bustle. "I remember finding fencing at 12. My mom and I happened to see fencers passing a local school, and she said, 'Whoa, these athletes are fully covered. No idea what that is, but I want you to try it.' And that's how I started fencing."

Even after finding a sport that complied with her faith, Muhammad was still faced with challenges when fencing in a hijab. A lack of representation for Muslim women in the sports industry also meant not very many comfortable, suitable options for activewear.

"[At first] I was fencing in a type of hijab that was made from [a material called] Georgette, which is a heavy, weird fabric that when it gets wet, I can't hear as well," Muhammad says. And this obviously impacted her game. Once she started sweating, Muhammad says she would often get carded by referees for starting too early, or starting too late. She would try to explain that she was having difficulties hearing the call to start fencing, but she'd often get carded anyway.

Then, Muhammad discovered Nike's Pro Hijab, which is specifically for female Muslim athletes. It's made out of a lightweight, mesh polyester and designed to be more breathable and stretchy. After being sponsored by Nike, and wearing the Pro Hijab during her matches, Muhammad started to notice how this affected her game. "[Once] I wore the Pro Hijab, I was like, oh my gosh, I can hear," she says.

Muhammad says the introduction of the Pro Hijab goes beyond her fencing career — now any Muslim woman can take up the sport, and do so comfortably.

She says that for Muslim women, being able to see themselves largely represented in the space of sports, health, and wellness makes all the difference in their pursuit of becoming athletes. Having a breathable and functional hijab is the first step that makes this possible. "Representation is huge, but also to be able to see yourself [represented on such a large scale], I think changes the way we feel and changes even the direction of our journey. It's in a meaningful way, and hopefully in a way that changes the narrative for the Muslim community."

But for Muhammad, the presence of her faith in her sports career goes beyond the practicality of what she is wearing. It also helps her get through a loss, and have hope for a win.

"I feel like my religion teaches me to lead life with faith," she says. "It's really easy to get caught up in a loss or [...] not qualifying for something like the Olympics or a world championship team. And through faith I can make it through anything. I try to stay with that mindset all the time, that I want my faith always to be bigger than my fears."

Ultimately, Muhammad understands what her position of visibility means for the Muslim community, and she wants to show that faith and sports can be two sides of the same coin.

"Having the opportunity to put fencing on the map I think is really cool and it goes hand-in-hand with being able to put Muslim women on the map as well," she says. "And if me being [in a place of visibility] is a way to combat those stereotypes, to change the narrative, to show up as an ally, then I'm really proud to be here."