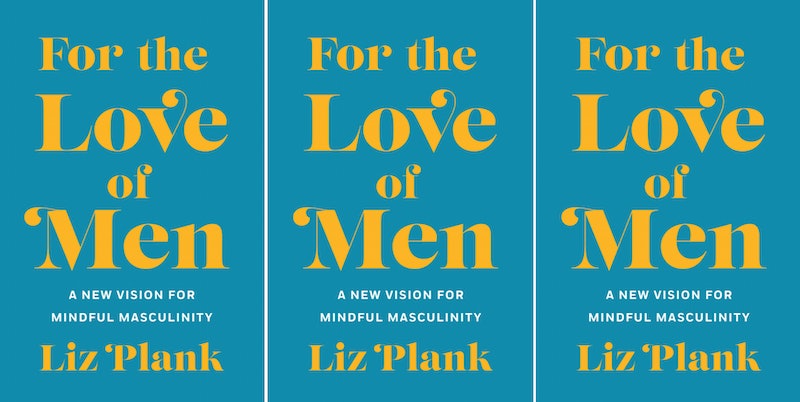 This article contains information about sexual assault, which some may find triggering.

I was 19 the first time a man pressured me to have sex with him. Eleven years ago, in a dorm room crowded with unopened textbooks and unwashed clothing, my ex-boyfriend begged to do what he wanted to me, even though it hurt me. I relented, worn down by his prodding, by my past experiences with harassment and assault, and by deep-rooted self-confidence issues. I did not recognize at the time that what happened to me constituted sexual assault, or that this experience would color every interaction I had with men thereafter, several of whom would attempt to coerce me, too. All I knew was that, even after I graduated and met the man who would become my husband, I didn’t trust men. Any of them. Including my husband.

But Liz Plank’s debut nonfiction book, For the Love of Men: A New Vision for Masculinity, contradicted everything I thought I knew about men.

When I picked up an advance-reader copy of Plank’s book at my bookselling job a few months ago, I recognized her name on the turquoise cover. Plank, an award-winning journalist and the host of two web series on Vox Media, "Divided States of Women" and "Consider It," often draws on punchy, tongue-in-cheek humor in her reporting to underscore the impact of gender inequality. When I started reading her book, I was fully prepared for a pointed takedown of men.

Instead, Plank’s book focuses on how the socially constructed gender binary system disempowers everyone — including men. She examines how society's idealized definitions of masculinity — long-held toxic beliefs such as "boys don't cry," or "boys will be boys" — create relational power imbalances that can lead men to behave destructively toward both themselves and others. As Plank reports, research shows that men are more likely to exhibit risky behaviors — often because of insidious cultural messaging that urges men to "earn" or "prove" their masculinity. Plank points to a Cornell University research study as an example, which found that male subjects in the presence of women ate 93% more pizza than when women were not present because, researchers concluded, the activity helps them "establish dominance hierarchies." "[B]ecause nothing turns women on more than a guy who is bloated and burpy and has pepperoni breath," Plank quips.

This book helped me connect my generalized distrust of men to my tacit acceptance of toxic definitions of masculinity.

But Plank’s probing investigation goes even further to link society's toxic definitions of masculinity to much broader systemic issues that harm everyone, including homelessness, mass shootings, and even climate change. Her research matters: In January, for the first time in its 127-year history, the American Psychological Association released guidelines to help psychologists “attend to the [gender-based] barriers” faced by men and boys. Women and non-binary folks, although they disproportionately experience sexual assault, face gender-based discrimination, and lack equal representation professionally and politically, have been moving past timeworn gender-role stereotypes conferred upon them by society; men have not had a similarly significant evolution. Plank writes, “Although the concept of world peace feels so impossible that it only comes out of the mouths of beauty pageant contestants, researchers who have examined wide and extensive global data sets have found that one factor seems to act as a shield for violence and warfare: gender equality.” If we worked to disrupt these internalized, toxic definitions of masculinity under which our society operates, Plank argues, it's possible we would be living in a calmer, more communicative, and gentler world.

This book helped me connect my generalized distrust of men to my tacit acceptance of toxic definitions of masculinity. Like many women and non-binary folks, culture raised me to fear men: I was taught to guard my drinks, avoid walking alone, and wear dresses that extend past my fingertips. This common fear for many stems in part from a widespread belief that people with higher levels of testosterone are biologically more prone to violent behavior — but, as Plank explains, science has proven time and time again that this is a myth.

If Plank had told me this a year ago, however, I would have been ready to fight someone. Absorbed by my own traumas in the wake of Christine Blasey Ford's testimony during Brett Kavanaugh's Supreme Court confirmation hearings (which Kavanaugh denied), I told my husband that I didn’t trust men, because I worried “most” abuse women. What I did not yet understand was that by repeating this internalized narrative aloud, I was accepting it, rather than questioning the cultural forces that normalize violent behavior.

I’m not wrong that toxic definitions of masculinity feed a widespread cultural problem of sexual assault, and I reserve my right to be angry about that. What Plank's book helped me realize is that culturally propagated narratives limit the potential for individuals of all genders to have fulfilling and emotionally honest relationships. Plank believes that, once more men can see how they are impacted by toxic definitions of masculinity, then we can transform masculinity and the gender system in general to become more inclusive of different ways of being. Engaging in this introspective process demonstrates what Plank calls “mindful masculinity,” a tool for redefining masculinity best summed up by this question: “What’s it like being me?”

Plank's bold contribution to the argument for intersectional feminism: to undo forms of oppression and social crises, we must empower everyone to redefine masculinity.

This book fundamentally expanded my concept of masculinity, strengthened my marriage, and even nurtured my self-compassion practices — but as a white, cisgender, deaf woman who uses a combination of hearing aids, spoken English, cued speech, and sign language to communicate, my experiences capture only one strand in the nexus of ways toxic definitions of masculinity insert themselves into relationships. While refuting pervasive myths about men, Plank also highlights stories of traditionally marginalized men who are of color, LGBTQ, disabled, and more, illustrating how toxic definitions of masculinity intersect with other forms of bigotry. Plank's bold contribution to the argument for intersectional feminism: to undo forms of oppression and social crises, we must empower everyone to redefine masculinity.

With an approachable humor and thorough engagement with the available research, Plank reminds us that we all have the power to listen, empathize, and free ourselves and each other from toxic definitions of who we are and what we must be. This quote says everything you need to know about her badass vision: “If you wouldn’t do it to a man, don’t do it to a woman. Modern chivalry is not about what you do; it’s about why you do it.” Indeed — it’s about who has power, why, and how they wield it.