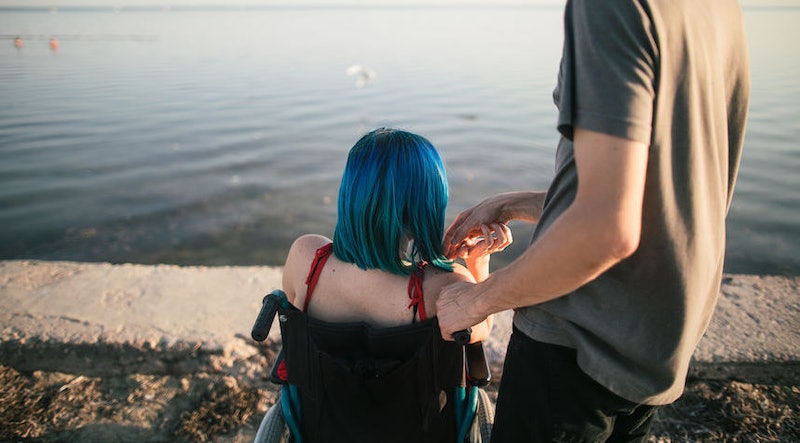 There’s no doubt that there’s been a number of important strides made in encouraging people to attend cervical cancer screenings in recent years. Initiatives such as the HPV self-testing pilot, the urine tests, and the free childcare and free bikini waxes for screening attendees have all been steps in the right direction. They came in light of the shocking statistics that stated cervical screening tests have fallen to a 21-year low despite screenings estimated to save 5,000 lives a year.

Cervical screenings can be difficult for myriad reasons, with embarrassment and anxiety usually seen as the main reason why attendance is declining. According to charity Jo’s Cervical Cancer Trust, 71 percent of young people who delay or don’t go for cervical screening do so because they are feeling scared, while 81 percent feel embarrassed.

But for people with physical disabilities who do want to attend cervical screenings, the reality is far bleaker.

According to Robert Music Chief, executive of Jo’s Cancer Trust, the barriers facing people with disabilities range from "issues around accessibility and lack of provisions in GP surgeries and difficulty in receiving a home visit from a medical professional."

"Women are missing out on tests that could potentially save their lives."

At present, there isn’t a national database on which NHS Trusts provide hoists that'll transfer people with disabilities with limited mobility onto examination tables, which has significant implications for referrals.

Worryingly, this kind of accessibility is somewhat of a postcode lottery. According to the Jo’s Trust website, "[w]hile in some areas women are able to access smear tests, whether through home visits, equipped GPs or provision to attend in other settings such hospitals, this is unequal across the county and mean some women are missing out on tests that could potentially save their lives." However, as there aren’t any official statistics on how many people with physical disabilities are prevented from cervical cancer screenings, it’s difficult to see how prevalent this issue is.

Fiona Anderson, who has Muscular Dystrophy, knows all too well the difficulties of accessing a cervical screening. Despite being sent letters from her GP since 2015 about attending a screening, the 30 year old from Bolton has been unable to access one for five years. "I rang my GP knowing I have access needs but I was told they didn’t have a hoist so there was no way of getting me on the table to do the test itself," Anderson explains. "I’m not able to have it done at home either because my GP practice doesn’t cover insurance at patient’s homes."

Anderson says this is happening to people with physical disabilities all across the country: "There’s a misconception that if you’re disabled, you’re a Paralympian who can transfer yourself. Most healthcare centres don’t have hoists and, if they do, it’s a case of having someone being able to operate it."

"My GP doesn’t view me as a high priority"

In addition, Anderson believes misconceptions around the sexual health of people with physical disabilities affects their access to screenings. "Doctors think because I’m a wheelchair user, the risk of cervical cancer will be lower. They assume that, as a woman with disabilities, I’m not sexually active so there’s no point referring me to a women’s hospital," she says, before adding: "I have two children so I obviously am."

Anderson explains that, due to these barriers, she’s trapped in a "vicious cycle." "I’ve been fighting this for five years," she tells me. "Even though I’ve been requesting ways around the access issue, my GP doesn’t view me as a high priority because they see me as a wheelchair user with complex needs so deem the risk of having cervical cancer to be low and don’t think it’s worth referring to the hospital where they might have facilities. It’s not just my current GP that’s said it — my last GP practice had the same attitude. There’s only so much fighting you can do before it takes a toll on you."

"There’s only so much fighting you can do before it takes a toll on you."

For Milton Keynes-based Kerry Thompson, who also has Muscular Dystrophy, attempting to access a smear test has been a decade-long battle. In her late 20s, she was told after a smear teat that she had abnormal cells, but after moving to a different area of Milton Keynes, she was unable to access a further test at her GP surgery despite repeatedly calling. "In the last 10 years, I’d get letters saying that I’m either late or due for a smear test but it was the same problem every time I rang them about accessing hoists," Thompson says. "Every year without fail, they’d tell me is that they were sorry they couldn’t help me as their nurses aren’t trained or they don’t have the facilities. I was never offered any alternatives and there was never a secondary option, it was always a case of 'sorry we can’t help.'"

Being in the dark for so many years on whether she does or does not have cervical cancer has, unsurprisingly, caused Thompson distress. "It become a growing concern when I was repeatedly told by my GP that they couldn’t help. If there was an issue, I would never find out until it was too late," she says. "But when I got the same answer over a 10-year period, I became very numb to the situation. If I constantly overthought the rejection every two or three years, I would have been a mess."

"Being a mum, I want to ensure if I did have cancer, I would be on the ball with early detection."

It’s a predicament that Anderson shares: she too worries about not discovering it until it’s too late. This issue feels particularly pertinent for her because her father passed away from cancer, and she is now a mother herself. "Being a mum, I want to ensure if I did have cancer, I would be on the ball with early detection."

However, even when people with disabilities are able to access a cervical screening, the challenges continue. For mum of three Lizzy Bunton, 32, who has Charcot-Marie-Tooth disease, although she’s able to get a screening every three years at her local GP in Devon, she says the room she goes to get tested is "so tiny" that it's very difficult to get into it with her wheelchair. "Having a screening itself can be stressful as it is but even before I go in there, I know it’s going to be difficult," Bunton tells me. "It’s hard getting my wheelchair in the right position because the room is really cramped. I have to wear certain clothes that are going to be easy to get on and off, there’s nothing to lean on such as handrails and as the bed is so narrow, I worry I’m going to fall on the floor. Having a wider bed and something to lean on would be much easier."

Despite her 10-year wait, Thompson has recently been able to have a screening after being hospitalised last year with an unrelated medical issue. When in hospital, Thompson met a gynaecologist who expressed concern that she hadn’t had a smear test in so long. So last month she underwent a colposcopy procedure (a procedure used to look at the cervix, the lower part of the womb at the top of the vagina), which required an overnight hospital stay. "I had to go for a pre-op, speak to an anaesthetist about the pros and cons of what I was going to go through. For something so simple as not accessing a smear test, I’ve had to be put to sleep which is very dangerous when you have Muscular Dystrophy as there could be complications. All those conversations become very surreal," Thompson says.

"It’s not right that disabled women shouldn’t have the same peace of mind that other women are able to get."

Anderson, the woman from Bolton, has now begun a petition with the aim of getting better access within GP surgeries for people with disabilities, demanding they provide hoists for patients who can’t self-transfer, and challenging insurance policy providers on why GPs can’t screen at home. "I found a big number of women with disabilities that have to jump through hoop after hoop to get access," she says. The petition has been signed by more than 109,000 people and the next step is to take it to Downing Street this summer.

Jo’s Trust are optimistic about what the HPV self-sampling piloting introduced this year means for people who are unable to access smear tests at their GP surgery. "We believe this will hugely benefit this group of people by enabling them to test at home," a rep from the charity says. "We want to see real change and equal provisions across the UK for those who need it. It should not be the case that anyone is denied access to this potentially life-saving test."

Anderson is still waiting to have a smear test, and is adamant that she will keep fighting: "There’s so much awareness of women who don’t go for smear tests but not enough for women who are trying their best to access them. This is women’s lives at risk," she says. "It’s not right that disabled women shouldn’t have the same peace of mind that other women are able to get through having this screening. Our lives are just as worthy as everyone else."