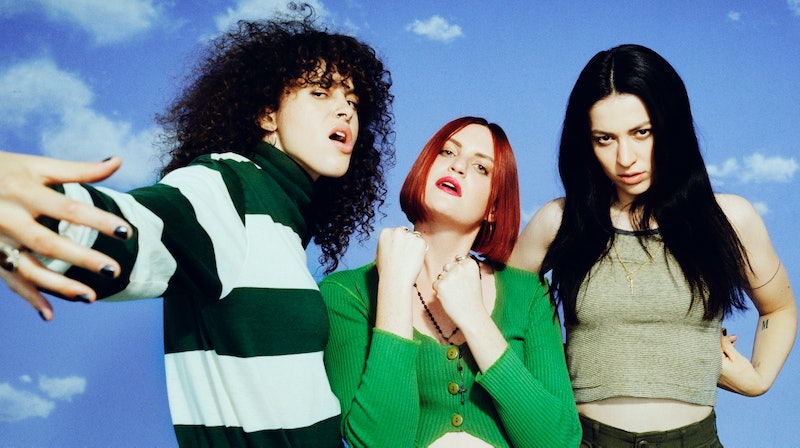 “We’re not a nihilistic band — we’re a very existential band,” Katie Gavin tells me, thrusting into immediate relief just how little of my philosophy A-level I’ve retained. Gavin, one third of pop trio MUNA alongside Naomi McPherson and Josette Maskin, is explaining the central theme of their impending second album, Saves the World. "We called it that because of this concept that intrigued us: that saving yourself should be seen as saving the world, and learning to care for yourself should be seen as saving the world," she says.

For some bands, that world-saving ambition might seem outlandish; not for MUNA, whose presence has always been political. Their 2016 single "Loudspeaker" tackles sexual assault and victim blaming; in live shows, when Gavin reaches the totemic lyric, "Every time I don’t shut up, it’s revolution," crowds erupt into a sort of defiant euphoria.

A subsequent single, "I Know a Place," was written "for queer folks, for people of color, for immigrants, for those who have been made to feel unsafe in their own skin," the band tweeted upon its release. It was intended as an anthem for the LGBTQIA+ community, but took on an even greater resonance after the Pulse nightclub massacre in Florida. "Let us keep singing for our lives," Gavin wrote in Time.

Later, performing the song on Jimmy Kimmel Live! after Trump’s inauguration, the band changed the lyrics to directly reject his politics. "Even if our skin or our gods look different, I believe all human life is significant," Gavin sang. "I throw my arms open wide in resistance/ He’s not my leader even if he’s my president."

"Personally, due to my multiple identities that are inside of me at all times, I can’t imagine being in a band that wasn’t politically outspoken to a certain degree because that would feel oppressive to me," McPherson says. "I can’t really imagine us not being a political band."

Speaking to MUNA in a four-way conference call feels a little like using the upstairs landline to eavesdrop on the three best friends you wish you had. Their brand of cool isn’t disillusioned or apathetic, but earnest and sincere. They answer my questions thoughtfully, then apologise for talking too much. When one finishes speaking, the others tell them how well they did.

It’s hard not to break a little, to abandon professionalism and tell them just how instrumental their music has been in surviving a rough few years. "That’s so magical," Gavin tells me. "That’s the coolest thing you could say."

The first single from Saves the World, "Number One Fan," is a defiant ode to loving yourself — stanning yourself, even — in the face of voices both external and internal that tell you otherwise. In the opening lines, Gavin declares, "Nobody likes me and I’m going to die alone"; by the second verse, however, she’s "coming for everyone and coming on strong."

"It’s trippy releasing music for the first time in two years and being like, 'Oh, people remember who we are, people seem to care!'" McPherson says. "I really do think it’s just me listening to the music and thinking about it in the obsessive way all three of us do."

"Number One Fan" has a significantly different vibe to the yearning melancholy of MUNA’s debut album, 2017’s About U. "It felt like a necessary progression and a natural progression," McPherson explains. "We came off the road after a lot of touring knowing that we wanted to make music that made people dance and made us dance. We all got into house music and dance music and disco, things that fill people with joy, and we wanted to do that with that song."

The band performed relentlessly after the release of About U; first, on their own North American headline tour, followed by a stint supporting Harry Styles. Coming home meant cutting off the validation of a several thousand strong audience every night — and staring down the spectre of the second album. "I think after coming off from tour with Harry and feeling really good about the first record, we were like, 'We’re going to do this and then we’re going to get right back out there,' but that didn’t necessarily go as planned," Maskin says. "It was really hard for us to realise we needed time to grow as people and musicians."

For Gavin, the band’s successes felt hollow. "When that was happening, you’d think that I’d feel like, 'Oh hell yeah, I’m doing something great,' but what I really felt was 'I don’t deserve this, this is not something that will last,'" she says. The end of the tour forced a period of introspection, including, for Gavin, a break from romantic relationships. "I needed to really look at, 'Why am I only interested in people who basically don’t like me? Why won’t I accept love from people who are kind to me or support me?'" she says. "I needed to take a step back and figure out why I kept doing the same things that make me want to kill myself."

The second single from the Saves the World era, 'Who,' deals with one such destructive habit. Gavin, who writes the band’s lyrics, uses the metaphor of hearing a love song written for someone else, but the inspiration was more universal. "It’s a song that speaks to the modern era self-harm of internet stalking an ex, finding out they’re with somebody new or they just said something romantic, and spinning out," she says. "It’s about romantic obsession with someone who just doesn’t want me."

In the video ("We just decided to film something a week ago," she tells me, a week before its release), Gavin sits before her computer, downing a bottle of wine as she watches McPherson and Maskin drinking on a rooftop, chalking "BFF 4 L" on concrete, circling each other in a pool, and ultimately leaning in for a kiss. It’s a visual that will be brutally familiar to anyone who’s made checking their ex’s Instagram a part of their daily routine. "Writing about something helps me change the behaviour, and I’m hoping maybe listening to this will help people change that behaviour," Gavin says.

"The whole record is about turning inward and trying to actively look at oneself to stop the compulsive behaviours we all have to try to detach from reality," Maskin adds. "Existing is really fucking hard and no one wants to, to be honest, to some degree. The record is saying, 'Me too, you’re not alone.'"

Saves the World targets the many ways we hurt ourselves — whether that’s by repeating destructive patterns, or excoriating ourselves for our mistakes. "There are ways that the record is about accepting that there are certain things that you’re not able to change in a certain time. You’re still being an imperfect person, but we’re putting that on the record and saying, 'This is good enough as it is anyway,'" Gavin says.

But the album’s vision isn’t a solipsistic one, they stress. "Acknowledging your privilege and positionality in society is part of that journey, in terms of diving further into yourself so you can be a better force in the world at large," says McPherson. "Knowing your privilege as an individual is an aspect of the world-saving activity."

"We’re also saying there’s not as much of a difference between yourself and the giant super organism that is all life on that planet," Gavin adds. "Our society would have us be in competition with each other as individuals, but that’s not the reality what of life is."

Like many second records, the album was difficult to write. "The first record was really the record of our whole lives before we became MUNA," Maskin says. "We had to figure out how to do it with some sort of time constraint, when sometimes you don’t want to, or when sometimes you don’t know how to. But looking back on it now, I’m so proud of all of us that we grew so much as musicians and as people, and I think the record really reflects that growth and that internal struggle we all had at certain points."

"It was such an amazing and long and unexpected process in so many different ways,” says McPherson. "With the first record, I know there was a part of me, just because of how new in the game I was, that wasn’t sure if I’d done the best work that I could have possibly done as a producer. This time I think we tried everything. We obsessed over every moment."

"It was very much a hero’s journey — we all had some sort of ego death, and then some sort of rebirth," adds Maskin. "We all tried to be active participants in our own lives and in the making of this record. We tried our hardest to make this piece of art and that’s I think why we all feel so good about it."

MUNA aren’t sure what they’ll do to celebrate when Saves the World comes out in September — there’s talk of Disneyland, or renting a boat on a lake somewhere — but this time around, they’ll look after themselves more, they say.

"With the first record, I feel like I really dissociated for a lot of it. I remember basically ignoring it when the record came out," Gavin says. "It’s scary to care so much, so I was completely tuned out. This time we’re trying to be here, and celebrate."

"We want to be present for this whole experience," Maskin adds. All three are devoting more time to self-care, she says: "Katie gardens, Naomi does yoga, I’m trying to meditate or figure some shit out."

And that, too, is the message of Saves the World, Gavin explains: caring for yourself when you can, but accepting that it's not always easy to do so. "It’s like a double-edged sword right now: so many of us are interested in self-care because of this situation where you have to work three jobs and none of them are paying the rent, and also every species is dying," she says. "Sometimes it’s like, 'OK, maybe I just need to do a face mask.'"