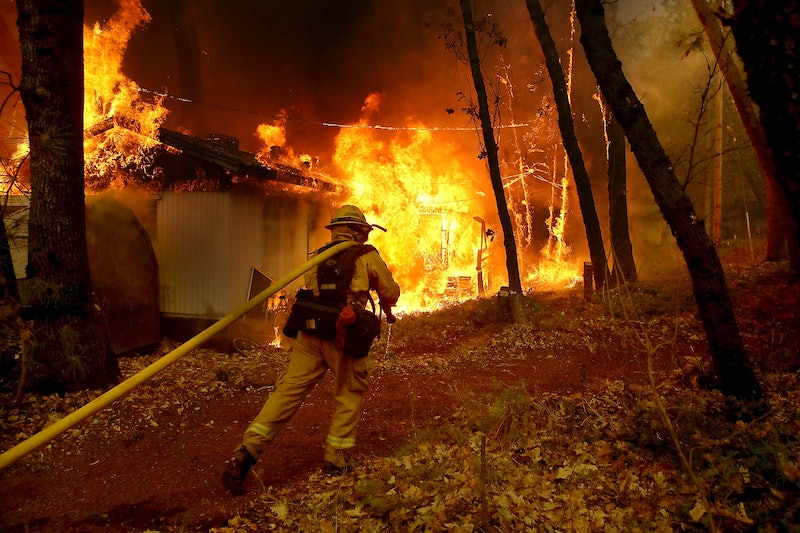 Though multiple fires have blazed through the Golden State for almost two weeks, expected rainfall could help contain the California wildfires in the coming days. But as water suddenly reaches the scorched ground, a weather change could also create new problems for those fighting the flames day in and out.

Northern California is forecasted to received a few inches of rain beginning Wednesday morning and then again on Friday, according to NBC News meteorologist Kathryn Prociv. Even though it won't be a downpour, the precipitation could bring with it risks of flooding and mudslides, as the fire has left more than 150,000 acres of land with little vegetation that would normally soak up the rain.

“This could bring difficulties in moving equipment in and out of the area and how crews can operate in remote areas. The rain changes everything,” Sacramento City Fire Captain Keith Wade told NBC, adding that the rain won't completely squash the Camp Fire. It could keep the flames from spreading, but more than three inches could also cause nearby rivers and streams to flood.

The Camp Fire in Northern California has killed at least 79 people and hundreds more remain unaccounted for, CNN reports, making it the deadliest wildfire in the state's history.

The Woolsey Fire in Southern California is now 96 percent contained as of Monday, a number that could increase with the help of some rain this week. CNN meteorologist Dave Hennen predicts that the area will receive less rainfall than Northern California, so the threat of flooding is likely diminished. Three people have died in the fire burning just west of Los Angeles, according to Cal Fire.

Thousands of people throughout the state have had to evacuate their homes, with many in the north forming a makeshift camp next to a Walmart in Chico, California. Butte County and the City of Chico announced on Sunday that the government will help evacuees relocate from the parking lot to an American Red Cross shelter, but Kelly Clark, a 39-year-old displaced by the fires, told The New York Times that she preferred sleeping outside the Walmart. The rain could make camping more difficult, however.

“I just feel freer out here, like I’m not locked up inside with a bunch of other people crying about what they lost,” she told The Times. “When it starts raining, maybe then we’ll make a move. But until then, we’re staying put.”

Butte County and the City of Chico explained in a press release that though no one will be forced to relocate, officials "want to ensure that all evacuees displaced by the Camp Fire have a safe, dry, and clean place to stay."

"It is overwhelming, I don't have any word to describe it," Butte County Sheriff and Coroner Kory Honea told CNN this week. "This is unprecedented. No one has had to deal with this magnitude that caused so much destruction and regrettably so much death."