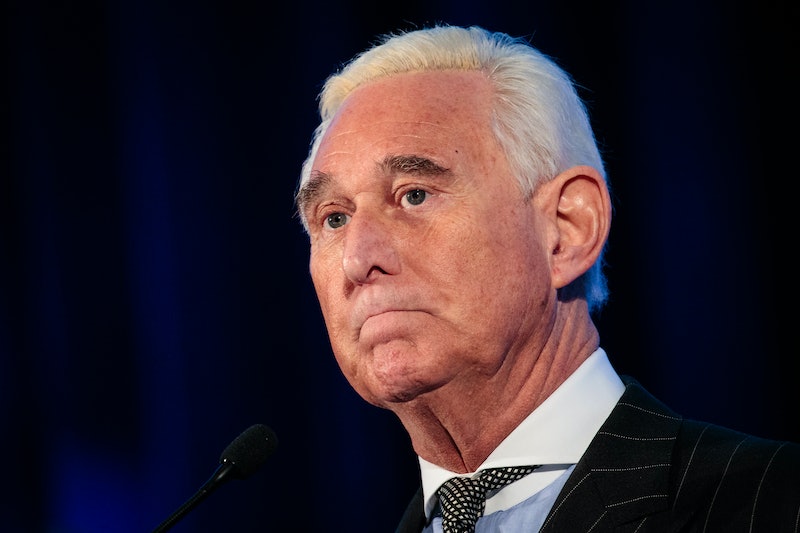 Former Trump campaign adviser Roger Stone has been arrested and charged with obstruction in the Russia investigation in what may be the special counsel's biggest move against a former associate of President Donald Trump since the probe began. According to Special Counsel Robert Mueller's office, Stone was indicted on seven counts, including obstruction of an official proceeding, witness tampering, and five counts of false statements.

In a statement emailed to Bustle, an attorney for Stone called the arrest, which was broadcast by CNN, unnecessary. "A telephone call and he would have appeared in response to the indictment," attorney Bruce Rogow tells Bustle. "Very disappointing that the [special counsel's office] chose to create a spectacle."

In court documents released upon Stone's arrest Friday, the special counsel's office alleged that Stone "corruptly influenced, obstructed, impeded, and endeavored to influence, obstruct, and impede" the House Intelligence Committee's inquiry into allegations of Russian interference in the 2016 presidential election. Specifically, the indictment alleged that Stone made false and misleading statements in his testimony to the House committee, lied to the committee about the existence of certain records, submitted documents containing false and misleading descriptions of his communications, and attempted to tamper with a witness in an effort to prevent or influence their testimony.

While the indictment does not directly name WikiLeaks, it details Stone's alleged contact with "Organization 1," which dropped a collection of emails allegedly stolen from the Democratic National Committee (DNC) during the 2016 election. What's more, court documents note that the head of Organization 1 was "located at all relevant times at the Ecuadorian Embassy in London, United Kingdom," per court documents.

What's more, the indictment alleged that Stone was also in contact with the Trump campaign regarding the leaked DNC and Clinton campaign emails. In fact, the indictment alleged "a senior Trump campaign official was directed to contact Stone" about what other releases or damaging information Organization 1 had on Democratic nominee Hillary Clinton following the July 22, 2016 email leak. "Stone thereafter told the Trump Campaign about potential future releases of damaging material by Organization 1," the indictment read.

The indictment goes on to alleged that "an associate of the high-ranking Trump campaign officials sent a text message to Stone that read 'well done'" following the Oct. 7, 2016 release of allegedly hacked emails from Clinton campaign chairman John Podesta.

While Stone has previously suggested that he expected to be indicted, he has, on multiple occasions, maintained his innocence. In December, he told reporters (via Bloomberg), "It's entirely possible that I would be framed but I am highly confident that I have violated no laws whatsoever in connection with the 2016 election or anything else." In that same interview, Stone went on to say he regarded Mueller's investigation "as a politically-motivated witch hunt," echoing a rhetoric often used by President Trump. More recently, Stone reportedly told Politico he was "bracing for his arrest" but asserted "there is no crime."

Stone was arrested in Fort Lauderdale, Florida, and is expected to appear in court later today, a spokesperson for the special counsel's office said in a statement emailed to Bustle.