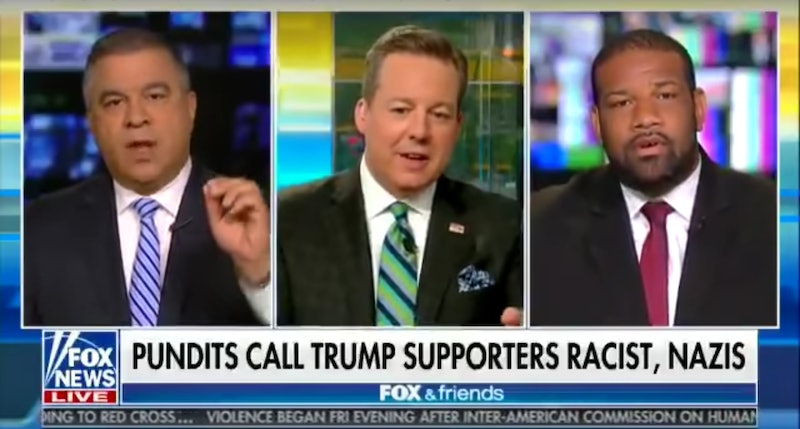 In an appearance Sunday on Fox & Friends, a former deputy Trump campaign manager told a black Democratic strategist he was out of his "cotton-picking mind." David Bossie's comment to Joel Payne has drawn significant outrage with many people calling it a racist attack. The two had been in the midst of a heated argument over the rhetoric liberals were using to oppose the Trump administration's "zero tolerance" immigration policies when Bossie made the comment.

"This is quite honestly disgusting," Bossie said, kicking off the panel with a reference to comparisons likening Trump's immigration policies to Nazi Germany. He went on to condemn liberals' use of the Nazi comparisons and argued that such attacks on President Donald Trump wouldn't help Democrats win in 2018.

"This guy's going to whine and cry, and it's unbelievable," a heated Bossie continued in reference to Payne. "The Democratic party are so angry and hate-filled towards the border patrol agents, towards police officers, towards I.C.E. Agents." Bossie claimed "the American people" were "done" and now recognize the Democratic Party as "nothing more than angry and hate filled."

Bossie and Payne continued to argue about rhetoric, often speaking over each other, as Fox News host Ed Henry struggled to moderate the panel.

"You started this segment saying that progressives and Democrats and the left are attacking the president, calling him a racist," Payne said. "No, we're just calling him out. Listen, you don't have to be a golden retriever to hear all the dog whistles coming out of the White House these days and from by friend David over here."

"You're out of your cotton-picking mind," Bossie said.

"Cotton-picking mind?” Payne shot back. "Brother, let me tell you something, I got some relatives who picked cotton and I'm not going to sit back and let you attack me on TV like that. You better watch your mouth."

Bossie appeared to express confusion as to why Payne was offended. "Attack you how?" he said.

Henry cut the two men off and attempted to end the segment on what he called "a civil note" by thanking Bossie and Payne for appearing on the show and wishing them a good day. When Fox & Friends returned from commercial break, Henry addressed Bossie's statement, calling it "offensive." The Fox News host said:

I just want to address what happened in that debate, obviously got fiery, David Bossie used a phrase that clearly offended Joel Payne and offended many others. I don’t know what David meant by it. ... But I want to make sure that Fox News and this show, myself, we don’t agree with that particular phrase. It was obviously offensive and these debates get fiery, that’s unfortunate. We like to have honest and spirited debates, but not phrases like that, obviously. And so I will just leave it at that.

Bossie later apologized to Payne for the comment in a tweet, writing that he "should have chosen my words more carefully and never used the offensive phrase that I did." A spokesperson for Fox News sent a statement to Bustle that said, "David Bossie’s comments today were deeply offensive and wholly inappropriate. His remarks do not reflect the sentiments of FOX News and we do not in any way condone them."

Trump named Bossie, then the president of the conservative political action committee known as Citizens United, as his deputy campaign manager in September of 2016. When revealing the news, Trump described Bossie as "a friend of mine for many years" and someone who was "solid," "smart," "loves politics," and "knows how to win," the Washington Post reported.

Then-Trump campaign manager Kellyanne Conway described Bossie as "a battle-tested warrior and a brilliant strategist." According to the Washington Post, Bossie was expected to help run strategic attacks against Trump's rival, Democratic presidential nominee Hillary Clinton, as part of his new role with the Trump campaign.

Following his victory in the 2016 presidential election, Trump offered many of his campaign officials — including Conway — jobs at the White House. Bossie, however, was reportedly not offered a role within the Trump administration.