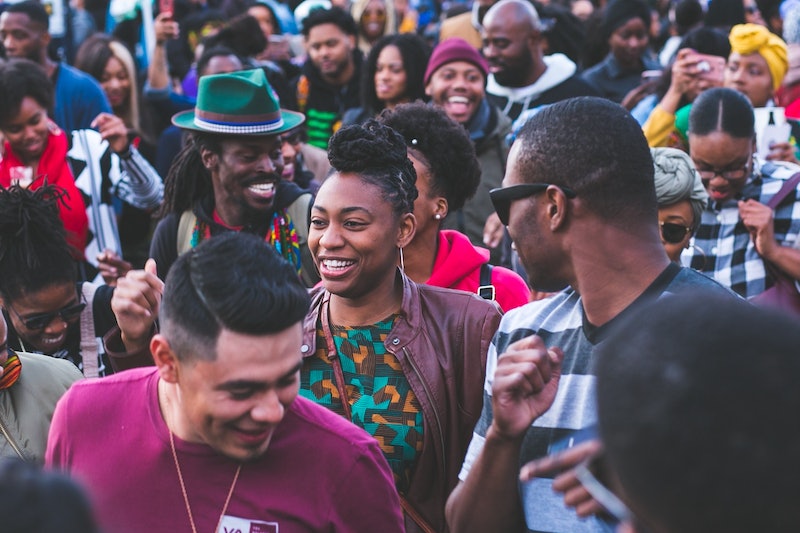 A week before the second annual Black Joy Parade, founder Elisha Greenwell was too nervous to sleep, "half-crying" from nerves, half from joy at her team's accomplishments. The parade will kick off on Sunday, February 24 at 12:30 p.m. in Oakland, California, but don't ask her how many people will be attending this year. She's superstitious and doesn't want to talk about it.

Greenwell says she's always been one to tell her friends and family about her latest ideas. But creating the Black Joy Parade, a parade and festival dedicated to celebrating the Black experience and uplifting local Black-owned businesses in Oakland, has to be one of the most rewarding.

"The only time the Black community was gathered in a big group was when we were sad," Greenwell tells Bustle. "When we were fighting and angry and pushing against something. We are amazing and beautiful and creative people, and we should gather because we can. [...] I think we can spend some time celebrating all the great things about our community. And the Black Joy Parade was born."

Originally from Sacramento, California, Greenwell moved to Oakland in her early 20s, and considers the vibrant, multi-cultural city home. Greenwell grew up not knowing many other Black or mixed-race children. She could never pinpoint what it was exactly that made her feel different in her hometown, but moving to Oakland finally gave her that sense of belonging she didn't even know she had been missing.

But upon recently returning to Oakland and hopping off the 19th St. BART station she once knew so well, Greenwell experienced something different. "I felt like people were looking at me, like I wasn't just a normal person in a community that's inclusive and diverse," Greenwell says. "It just felt different."

Greenwell says she's not sure if this was because of recent gentrification of Oakland, but she had a gut feeling she couldn't deny. "It wasn't even just the sheer numbers, the dwindling of the black population, given the cost of living," Greenwell says. "But I also felt that there was a lack of support for some of the organizations that I think are foundational to the culture of the Bay Area, not just the Black community."

Greenwell was worried Oakland residents would lose that sense of belonging she once felt, so she set out to revive Black joy with a parade. "Black joy" has been used to showcase various moments of joy in the Black community since writer Kleaver Cruz founded the Black Joy Project in 2015.

"For me, Black joy means belonging [...] to feel like you're not the only one," Greenwell says. "To feel like people get it, how you felt growing up and what you're going through, and how you identify yourself. And no one is the same, but just to be around people who you don't feel like you have to explain it. [...] You know it when you feel it."

To get started, the first thing Greenwell did was call her sister. She then created a Facebook event, and invited people to a meeting at a local Black-owned coffee shop. She says maybe seven people showed up. One of them was her cousin, and one was her best friend.

Although Greenwell has always made volunteering a part of her life, she had never created an activist movement from the ground up. "The biggest event I ever planned was my birthday parties, which are kind of epic, but definitely not 14,000 people, more like 14 people," Greenwell says.

For the next six months, any free time Greenwell had was dedicated to meetings with local business owners and prominent community members. Meetings were about getting local businesses involved, but more importantly, getting input from leaders about the needs of the community.

But planning the parade was anything but simple, and Greenwell faced some roadblocks along the way. Having recently moved back to Oakland and having somewhat limited connections was one of them.

Another was getting all the permits and policies needed to host an event. Greenwell took these policies seriously, and wanted to ensure everyone in attendance felt safe and welcome. When surrounding the event with fencing was suggested, Greenwell decided against it, saying it felt intimidating and she wanted the event to feel open.

Another challenge Greenwell faced was making sure the parade felt inclusive to everyone within the Black community. That meant navigating tensions between the LGBTQ community and the religious community.

"If you identify as Black, we want you to be able to come and find your joy here and bring your joy here," Greenwell says. "We can't let people within the community try to harm other people in the community. So that continues to be a challenge, to navigate it. And something that I had to take a stand on, as the leader, as the founder. To say, no, this is an inclusive event. I'm not going to allow people to be hateful towards other people within our community."

It's hard to believe word of mouth led to the 14,000 person turnout at the parade last year, but Greenwell says when you give businesses and organizations a place to shine, they will invite their people.

This year's parade theme is "Crown Your Joy". Greenwell and her team wanted to encourage reaching for the sky. "I would hope that [parade attendees] feel so much joy, that they can, even for a second, forget about all the obligations, and all the things they need to do, or want to be," Greenwell says. "They are just fine the way they are. [...] It's just about celebrating you."

The parade will only be bigger than last year, featuring live music, spoken word, dance performances, an art walk, and a hair styling station where attendees can literally crown their joy.

This year, the Black Joy Parade is featuring about 130 vendors and will award a grant to the four most creative organizations in attendance. Greenwell hopes that by growing the parade, she can offer support to more people in the community — and help them heal.

"People have a lot of healing to do," Greenwell says. "[...]Years and years of trauma and displacement and not feeling like you belong, can really wear on a person's soul. And then to ask them to go out and protest all the time, and keep fighting it, that's tiring. It gets exhausting to be righteous. And I see that in people, I feel that in people. And I hope that Black Joy Parade offers them some relief from that, even if just for a day."