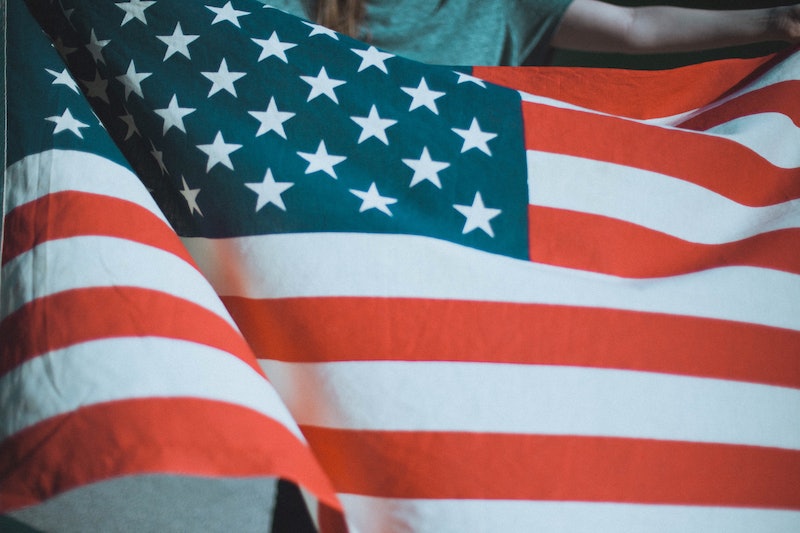 Independence Day is fast approaching, and people have a lot to say about the Fourth of July. These Fourth of July 2017 quotes are super patriotic, even if you aren't overwhelmed with pride to be an American right now given the state of the U.S. government. While the word "patriotic" is defined as having or expressing devotion to, and vigorous support for, one's country, it can be interpreted in myriad ways.

"Patriotism is often envisioned today as thoughtless pride in one’s homeland, regardless of the state of affairs that the country is in or the actions of the ruling body," Gabriel Stanley wrote on The Index. "Those who are slighted, who are most affected by the increasingly polarized government, are the one’s whom a sense of positive patriotism is the most important of all. This form of patriotism that seeks to change the established government for the better, the mentality that assumes the responsibility of upending the degrading morality of the current American administration."

So, if you've been feeling unpatriotic, let's take back the word and use it as it was originally intended. Having pride in our country means having pride in, and supporting, every person who lives in the United States. Here are some patriotic quotes to share this Fourth of July, because we can do better. We must do better.

1. "Those who deny freedom to others deserve it not for themselves." — President Abraham Lincoln

2. "Give me liberty or give me death!" — Patrick Henry

3. "In the end, we will remember not the words of our enemies, but the silence of our friends." ― Martin Luther King Jr.

5. “May we think of freedom not as the right to do as we please but as the opportunity to do what is right.” ― Peter Marshall

6. “The truth will set you free, but first it will piss you off.” ― Gloria Steinem

7. "The future depends entirely on what each of us does every day; a movement is only people moving." ― Gloria Steinem

8. "We must be free not because we claim freedom, but because we practice it." — William Faulkner

9. “Independence means enjoying freedom, and empowering others, too, to let them do so.” ― Vikrmn

10. “We cannot expect people to have respect for law and order until we teach respect to those we have entrusted to enforce those laws.” ― Hunter S. Thompson

11. "I never had faith that the answers to human problems lay in anything that could be called political. I thought the answers, if there were answers, lay someplace in man's soul."— Joan Didion

12. "If the people cannot trust their government to do the job for which it exists — to protect them and to promote their common welfare — all else is lost. — President Barack Obama

13. "If a country doesn't recognize minority rights and human rights, including women's rights, you will not have the kind of stability and prosperity that is possible." — Hillary Clinton

14. "Change requires intent and effort. It really is that simple.” — Roxane Gay

15. "You may encounter many defeats, but you must not be defeated." — Maya Angelou