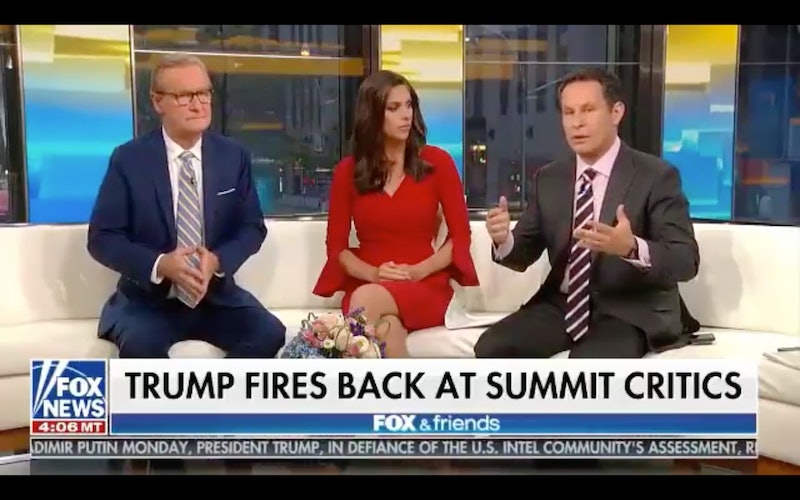 In the less than 24 hours after President Trump's incendiary remarks at his Helsinki press conference with President Vladimir Putin — namely, refusing to admit Russia meddled with the 2016 election — criticism has rained down from both sides of the aisle. In addition to numerous Democrats, several Republicans spoke up. And by Tuesday morning, even Fox & Friends condemned Trump siding with Putin over American intelligence and law enforcement.

The tone of hosts Steve Doocy, Brian Kilmeade, and Abby Huntsman was softer than other voices. Sen. John McCain called the press conference, "one of the most disgraceful performances by an American president," and Sen. Jeff Flake tweeted it was "shameful." Although Huntsman did tweet that Trump had thrown "your own people and country under the bus," on air, the Fox & Friends crew called the president's statements a "correctable" mistake. Kilmeade said:

When Newt Gingrich, when Gen. Jack Keane, when Matt Schlapp say the president fell short and made our intelligence apparatus look bad, I think it’s time to pay attention and it’s easily correctable from the president’s perspective. Nobody’s perfect, especially [after] 10 intensive days of summits, private meetings, and everything on his plate. But that moment is the one that’s going to stand out unless he comes out and corrects it.

Kilmeade even went so far as to endorse the most recent indictments out of Special Counsel Robert Mueller's Russia probe, which the president has frequently referred to as a "witch hunt."

"We have no reason not to believe [the recent indictments]" of people involved in "hacking into the election — not affecting the result, but going ahead and creating chaos in our electoral system," he said.

In fact, it's unclear — and at this point, not quantifiable — the extent to which the Russian hacks of the DNC and DCCC affected election outcomes. In 2017, CIA Director Mike Pompeo also asserted that intelligence had eliminated any possibility of Russia's hacking affecting election results, but that statement was shown to be false, Reuters reported, and the agency walked his comments back.

This is not the first time that Trump has sided with Putin over this particular issue, which some see as a defense against allegations that he might not have been legitimately elected. "Every time he sees me, he says, 'I didn't do that,'" Trump said at the Asia-Pacific Economic Cooperation summit last November, during which both leaders had multiple opportunities to talk. "And I believe, I really believe, that when he tells me that, he means it."

On Monday, asked whether he would condemn Russia for election interference in that moment, Trump equivocated. "The intelligence community said they think it’s Russia," he said. "I have President Putin, he just said it’s not Russia. I don’t see any reason why it would be." Especially in light of his recent harsh rebukes of European Union and NATO allies, questions and criticism are swirling about his allegiance to Putin.

Fox & Friends' influence over the president is well-documented. Axios' Mike Allen said its commentators are effectively White House advisers, seeing as the president has been known to tweet out talking points from the show shortly after it airs. It is generally supportive of the president's policies, and even with the criticism it leveled, Tuesday morning's show was no exception.