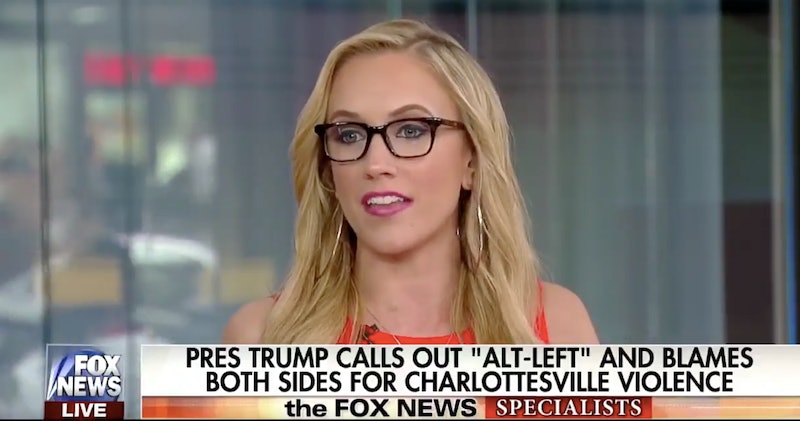 President Donald Trump delivered some additional off-script remarks about the violent alt-right rally in Charlottesville, Virginia, over the weekend during a speech that was supposed to be about infrastructure. Following his doubling down on the "many sides" he claims were at fault for the violence, even conservative networks, like Fox News, can't believe what Trump is saying.

In his comments, the president proposed that it wasn't only the armed, white supremacists (the group the driver of the dodge charger used in the car attack was allegedly involved with) at fault for the death of Heather Heyer, 32, but also the "alt-left."

Shortly after the presser, The Fox News Specialists' co-host Kat Timpf literally couldn't disguise her disdain for the president's failures to condemn white supremacists in his most recent off-the-cuff comments.

It's crazy for me to have to comment because I'm still in the phase where I'm wondering if it was actually real life what I just watched. It was one of the biggest messes I've ever seen. I can't believe it happened.

Timpf also took issue with the sudden desire from the president to be measured and "know the facts" in the Charlottesville situation before condemning any party — particularly as it offered more of a benefit-of-the-doubt to alleged neo-Nazis than he offers others. She cited his history of being (proudly) the first to accuse "Islamic terrorists" in multiple other violent situations. As Timpf said:

I'm surprised he didn't say it was a terrorist instead of waiting to say something. "This was clearly an Islamic terrorist!" Because he's done that before, before he's had the facts. He is not measured in his criticism. He goes after people as soon as he gets the inkling.

Her criticism went deeper, acknowledging that the amount of time it took for President Trump to condemn "a gathering full of white supremacist Nazis" — a move that she said wasn't too controversial.

For him to take 48 hours, that is something he has never done before. And, yeah, it shouldn't be some kind of bold statement to say, "Yes, a gathering full of white supremacist Nazis doesn't have good people in it. Those are all bad people, period." And fact that that's controversial, I don't know if I should just laugh. I have too much eye makeup on to start crying right now.

Maybe it's time for everyone to follow Timpf's lead and invest in high-quality, water-proof make-up for future episodes of incredulous fury.