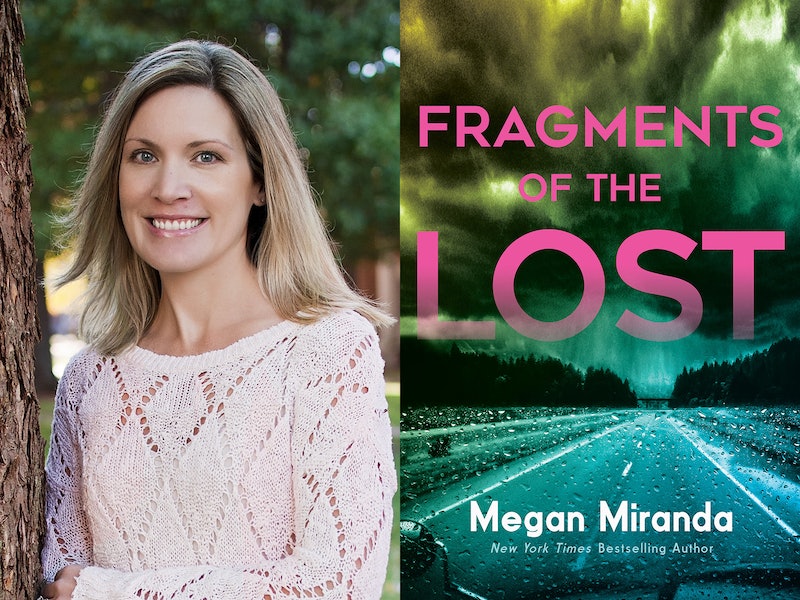 Anyone who has ever lost someone knows that there is no task more grim than cleaning out their rooms — sorting through their clothes, their books, their trash, and their mementos. All the stuff they will never touch or use or see again. In Megan Miranda's new YA thriller Fragments of the Lost, out Nov. 14, Jessa Whitworth is faced with the insurmountable task of cleaning out her ex-boyfriend, Caleb's, room. She doesn't belong there — especially since his mom blames her for the accident. And especially because she still feels so guilty about their final moments together. But as she sorts through the fragments of his life, she begins to remember things — and it doesn't exactly add up to what she's discovering in his room. Suddenly, she's faced with the realization that she didn't know Caleb as well as she thought she did.

Maybe she didn't know him at all.

Thriller readers — who likely already recognize Megan Miranda from her adult books, like All The Missing Girls and The Perfect Stranger, or her previous YA novels, like The Safest Lies — will find themselves flipping the pages of this fast-paced, propulsive thriller long into the night. If you can't wait until November to get your hands on this story, here's a surprise: Bustle has an exclusive excerpt to tide you over until the book is released. Read it below!

Fragments of the Lost by Megan Miranda, $18.99, Amazon

His mother asked me to do this, because she said it wasn’t something a mother should ever have to do. I don’t think it’s really something an ex-girlfriend should have to do either, but mother trumps ex any day of the week.

“The room is full of you, Jessa,” she explained, by which she means the pictures. They’re taped around the room, directly to the gray slanting walls, and in all of them I have my arms looped around his neck, or his arms draped over my shoulders from behind me. I can’t even look directly at the photos, but his mother is right. I’m everywhere.

There’s a chill up here, but I know it’s nothing more than the poor insulation of a converted attic, heat escaping through the cracks of the window frame, the November air seeping in from the outside.

I can’t even look directly at the photos, but his mother is right. I’m everywhere.

His clothes are still on the floor, however they fell when he last kicked them off, on that rainy day in mid-September. His bed is unmade. His computer monitor sits black on the desk, my distorted reflection looking back. His desk is stuffed full with ticket stubs and old homework, and more, I know, and so is the closet. Caleb wouldn’t want his mother doing this, either. Under the bed, between the mattresses, there are things a mother shouldn’t see. My stomach rebels, but I can feel her still watching, so I step inside.

I hated that, the way he’d brush aside everything else, forcing the point, or the issue, or this moment.

Just forget about it— Just leave it—

Just pick up the shirt at the foot of the bed, the one he wore the last time you touched him.

The shirt still smells of him. Dove soap. The cologne that always let me know when he was behind me, a smile starting even before he’d place his hand on my waist, his lips on my cheek. I don’t bring it to my face. I don’t dare bring it any closer. I throw it into the corner—the beginning of a pile.

Underneath the shirt, there’s also the jeans. Knees worn thin, hem slightly fraying, soft and familiar. I’m holding my breath by the time I get to the pockets, except I already know what’s there, so it should prepare me. But it doesn’t. The chain crackles, cold on my fingers. And then I feel something else: the memory of his warm skin as I placed it into his open palm.

I said: Please hold this for me.

I said: Please be careful.

He put it in his pocket, no big thing. He did it like that because of everyone watching. To show me he didn’t have to be careful anymore. Not with me.

The chain crackles, cold on my fingers. And then I feel something else: the memory of his warm skin as I placed it into his open palm.

The clasp of the necklace in my hand is broken, had already broken when I gave it to him, but the gold chain is now kinked and knotted too, from sitting buried in his pocket. I wore it every race, even though we weren’t supposed to, taping the dragonfly charm to the inside of my jersey to keep it in place while I ran. I wore it because it was good luck, because it was a ritual, because I had a hard time doing things any other way than how I’d always done them. It broke on the starting line as I raised my hands over my head in a stretch. The pop against my skin, sickening. My body already wound tight, waiting for the gun. I scanned the crowd, and there he was—familiar. It didn’t occur to me right then that he had no reason to be there anymore. It didn’t even register. There was no mystery, just the momentary panic of a broken necklace and a race about to start.

Wait, I begged, leaving my place on the field. I jogged over to him, standing near the starting line, as everyone else took their places.

Please hold this for me. Please be careful.

He frowned at the dragonfly in the crease of his palm, closed his fist, slid his hand into the right front pocket of his favorite jeans. Shrugged.

I wish I had known that this would be it—the last time I saw him. I would’ve made sure the last image I had of him was not like this: this apathy; his blue eyes skimming over me, settling to the side; and then the breeze, blowing his light brown hair across his eyes, shuttering everything. The image I see constantly, now burned into memory.

I wish I had known that this would be it—the last time I saw him. I would’ve made sure the last image I had of him was not like this...

He left before the race was over, probably remembering he didn’t have to be there for me anymore. Or maybe it was

something else. The rain. A word spoken. A thing remem- bered. Either way, he left. Came back home. Tossed his jeans on the floor of his room, my necklace still inside. Left them there. Changed.

And this is how I’m sure that this is my penance.

Fragments of the Lost by Megan Miranda, $18.99, Amazon