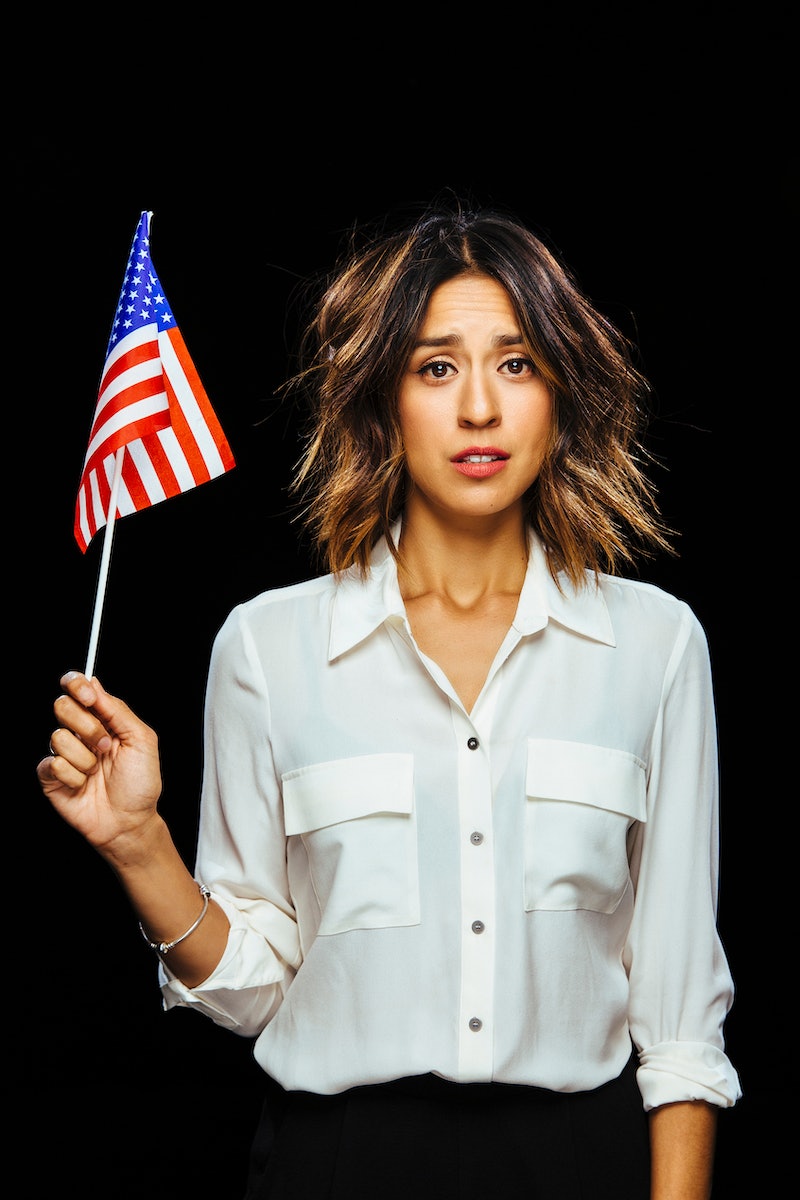 There's no shortage of stories in the news cycle that can overwhelm and depress us — and with that comes the risk that viewers will burn out and shut off the news. But that's exactly why comedy may be the best way to keep Americans informed, engaging us in a way straightforward news can't. No one knows that better Francesca Fiorentini, the producer and host of Newsbroke, the first comedy venture from AJ+, Al Jazeera Media Network's digital-only offshoot.

"I hate the word, but 'infotainment' is good. It's not letting people off the hook, it's pointing out the absurd," Fiorentini tells Bustle in a phone interview. "Now that we live in the ninth ring of absurdity and everything hurts to read, I think political comedy is the perfect vehicle to alleviate that pain and not let folks off the hook when it comes to knowing where that pain is coming from."

In a sense, political comedy serves a twofold purpose, as it can temporarily relieve news-based stress, while simultaneously prodding and poking fun of the origin of our collective stress. This balancing of information and entertainment is particularly cathartic at a time when Donald Trump's election has caused stress for many Americans. In fact, a report released in February by the American Psychological Association (APA) revealed that 57 percent of Americans said the political climate was a "very" or "somewhat" significant source of their stress, while nearly half claimed the outcome of the election caused them stress.

But Newsbroke is about more than getting some laughs out of some pretty unfunny news. Fiorentini tells Bustle that one of her goals is to make the journalistic main operative of Al Jazeera more digestible and accessible for both younger audiences and audiences that don't aggressively seek out hard-hitting journalism. Using comedy, she says, is an ideal way to bridge this gap.

"AJ+'s goal is so much about creating news like Al-Jazeera, but making that digestible for young folks," Fiorentini says. "One way we do that is through humor, speaking to people like you're talking to a friend. There's something almost more honest about political comedy, because you're fusing real concerns with the desire to make people laugh, and being unapologetic about both."

She believes the comedic bent of Newsbroke can even help lure skeptics caught up in the "fake news" allegations against legitimate, credible sources. As politicians, including the president, slam unfavorable coverage as mere "fake news," comedy may be a way to counter these attacks on news reporting.

"People are so quick to call news fake, to adopt this teenage angsty attitude, the fomenting of doubt of the truth. When people say, 'Screw news, it's all the same, it's all corporate,' then I'm like, 'So where do you go?!'" says Fiorentini. "Whether or not [it's] conscious, there is a discrediting and a dismissal of real news sources."

However, that's where Newsbroke has a golden opportunity: "You can just say 'fake news' and use that as an excuse to be an anti-intellectual, so that's where comedy swoops in."

While Fiorentini and the Newsbroke team are constantly tooling with ways to find the funny amidst a bleak news stream, she shares that for her personally, it's important to let viewers know that they do take the implications of this administration seriously. The jokes, she says, are meant to punch up and make light of our current state, rather than undermine any real fears or pain.

"I think there's a comedy renaissance going on, because deep down people realize we can't dismiss everything. We can't laugh everything off and be ironic. Yeah, we're going to throw in a joke about Dumb and Dumber 2 after talking about an immigrant being deported, but we're still punching up," Fiorentini says. "We're not taking any of this lightly. I think that's the renaissance, I think people want realness."

More like this
Here's How To Stream 'Downton Abbey: A New Era' & The New 'Downton' Channel
By Alice Broster and Sam Ramsden
How To Fight For Reproductive Rights, Based On How Much Time You Have
By Courtney Young
How 5 People Upended Their Lives To Fight For Abortion Rights
By Hannah Smothers
Boris Johnson’s Leadership Is In Question – Again
By Bustle UK
Get Even More From Bustle — Sign Up For The Newsletter