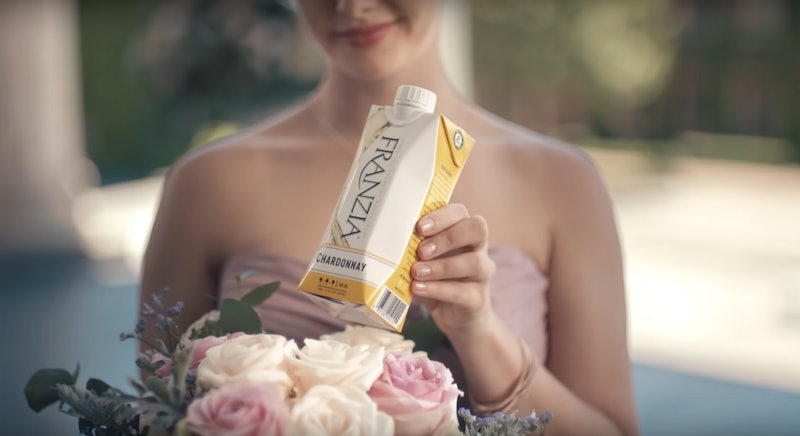 Were you someone who drank Franzia in college? If so, the brand misses you. It wants to be Franz again. (Franzia's pun, not mine.) In order to lure millennials back in, Franzia has released mini boxed wines, along with a new campaign called "Franz for Life". (Yep, that pun will be popping up again and again.)

First! The mini wine boxes. Franzia is known for its five liter boxes of wine with that big ol' bag inside, but now, the brand has released "Little Franz," 500mL containers of wine, as reported by Delish. These Little Franz are easy to take on the go. You could take them to a picnic, for instance, or to a movie if you're a rebel with a large handbag. But be careful: 500mL is three glasses of wine. This might have been totally cool back in the day, but as Franzia won't stop pointing out, we are all aging and nothing can be done to slow the passing of time. Might as well enjoy some boxed wine while we're at it, hey?

Little Franz come in four summery varieties: Rosé, Chardonnay, Crisp White, and Pinot Grigio/Colombarde. Maybe if they do well reds will be introduced once it starts cooling down again.

The suggest retail price for one Little Fran is $3.49, which puts you at about a dollar per glass of wine. At this time of year, this is convincing, especially now that it's getting warm enough to enjoy a glass (or three) of wine outside. Why pay $8 for a glass of wine at a bar, when you can pay $1 to have a glass wherever you want. (Unless you are too classy for Franzia, that is. Which is a very acceptable reason.)

As for what else Franzia has going on, there's the "Franz for Life" campaign, which includes a commercial all about growing older with Franzia. As people are shown reaching milestones in their lives, Franzia is there, too. The Golden Girls theme song is also involved, because "thank you for being a Franz"... obviously.

Jeff Dubiel, the Chief Marketing Officer at The Wine Group, which produces Franzia, said in a statement,

While Franzia continues to have a strong pull with Boomers and Gen X wine consumers, the brand’s largest demographic segment is millennials. We want to be sure we’re growing with our customers at all stages of life. This new campaign is designed to reinforce the message that Franzia can be enjoyed at any age and encourages our customers to be "Franz for Life."

Whether you're in it for buttery Chardonnay, mini wine boxes, pure nostalgia, or to have something to sip on while you think about the long, winding journey of life, Franzia is there for you. And don't you forget it.