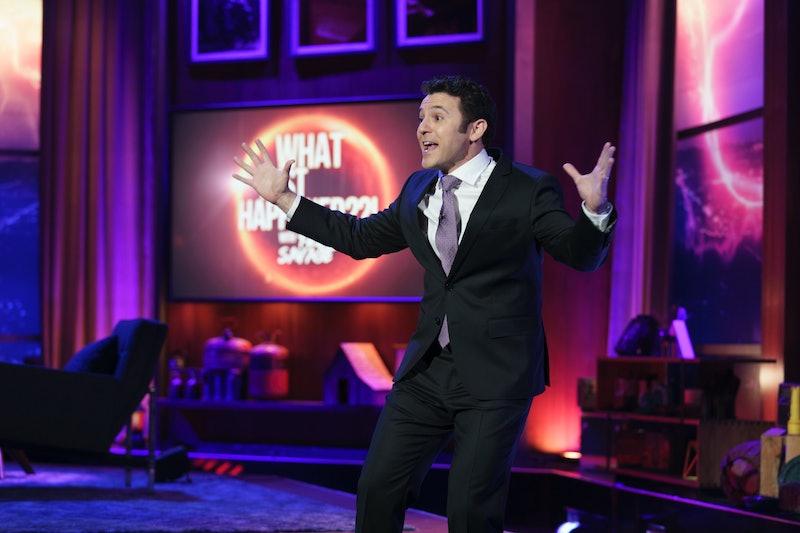 Premiering on Fox June 30, Fred Savage'sWhat Just Happened??! is a new aftershow all about sci-fi series The Flare. It includes everything a devoted fan could possibly want: fervent post-episode discussions, interviews with the stars of the show, even set visits. The catch? The Flare doesn't actually exist. It is a completely made up, fictional project. But that's not what What Just Happened??! would have you believe.

Though viewers are very much in on the joke, the new spoof show is deeply committed to keeping up the whole Flare ruse. Fox created an entire website dedicated to TJ Whitford, whose acclaimed (and also made up) novel The Moon Is the Sun at Night has been adapted for The Flare. His site includes a very detailed bio, as well as a page for events and books (The Moon Is the Sun at Night is conveniently sold out). "Terrance John Whitford is one of America​’s most mysterious and prolific authors. In a career spanning over five decades, he’s published dozens of short stories, articles, and letters to the editor, but none of his work can match the cultural relevance of his seminal 6 part science fiction series; The Moon Is the Sun At Night," the site's about page reads.

Offscreen, Shiri Appleby and Kevin Zegers (both stars of the fictional Flare) have shared photos on social media promoting the made-up show and book. There's even a fake trailer for the series! If you didn't know anything about What Just Happened??!, you'd definitely think The Flare is real — and in fact, some of Appleby and Zegers' followers seem convinced it is. "Looking forward to it," commented one fan on the video Appleby shared of the fake trailer. "Omg! So excited! Is there an actual release date?" wrote another.

During an interview with TV Insider, Savage explained that What Just Happened??! isn't meant to make fun of aftershows, such as AMC's The Talking Dead or Netflix's Beyond Stranger Things, but actually, to celebrate them. "We wanted to do something fun that would make us laugh. I can't believe we convinced Fox to let us do it!" he told the outlet. "We're not trying to parody anything or make anyone look silly. Every one of us has that thing that we love. We're embracing and celebrating the fervor of fandom."

The premise for What Just Happened??! is arguably one of the weirdest ideas for a television series ever, let alone one on a major broadcaster like Fox, which doesn't typically have aftershows — and certainly not fake aftershows. The unique project is likely a result of Savage's development deal with the network, which he inked in 2016 while starring in the since-canceled Grinder.