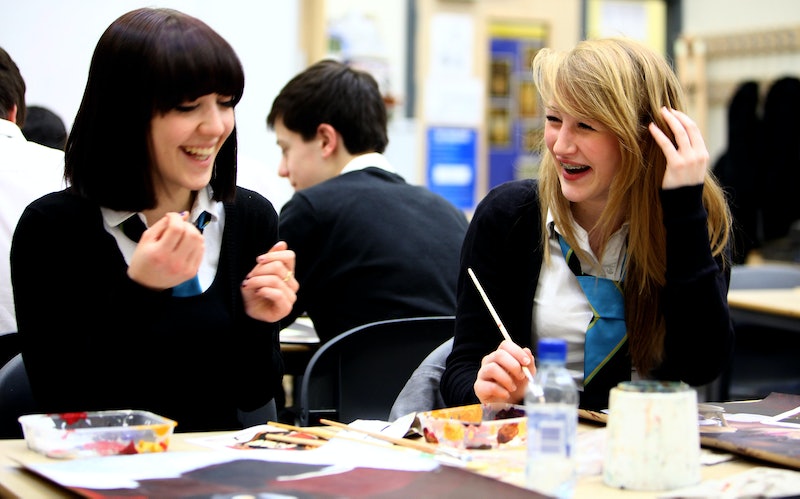 When you were a teenager, did you ever have to ask a friend or teacher for a tampon because your period started unexpectedly? Yeah, me too. Dealing with your period as a middle schooler or high schooler can be tough, but two states have passed laws that make having a period a little easier. Free tampons are coming to public schoolers in California and Illinois, thanks to new laws going into effect this year.

California’s law specifies that public schools with a low-income student population of at least 40 percent must provide menstrual hygiene products in at least half of the bathrooms on campus. The law also prohibits the school from charging students for pads and tampons. Students in sixth grade through 12th grade will benefit from this change.

Illinois passed a similar law that will benefit students in public schools. The law notes that “[menstrual] hygiene products are a health care necessity and not an item that can be foregone or substituted easily.” Lawmakers connected their decision to provide free pads and tampons to education. According to the text in the law, legislators didn’t want young students missing “multiple days of school every month” because of their periods. “When students have access to quality [menstrual] hygiene products, they are able to continue with their daily lives with minimal interruption,” lawmakers wrote.

These laws lift an economic burden from some families. The pink tax, or the extra money people pay for products marketed towards women (which are, more often than not, necessities, not luxuries), adds up, and some families simply cannot afford it. Tampons and pads are charged sales tax in some states because they are considered “luxury” items, though there is a growing movement to change this. Periods aren’t a luxury, and these laws are a huge step in the right direction of normalizing everyday bodily functions.

California has also recently implemented other laws that will benefit low-income and marginalized students. As of last year, students in middle school and high school must be offered education training on human trafficking identification and prevention. There were 705 cases of human trafficking in California last year, and the victims were overwhelmingly female, according to the National Human Trafficking Hotline.

“Meal shaming,” or punishing children for having lunch debt, is also becoming a thing of the past in California. Previously, students who have an unpaid balance in their school's cafeteria have had their meals taken away from them and thrown away, or they may have been only given a snack to eat during lunch. State Sen. Bob Hertzberg said in a statement, “When you’re treated differently as a child in school, it’s shameful. And in this case, the child is being harmed as a tool to collect their parent’s debt. That makes no sense whatsoever,” according to reporting from the Los Angeles Times.

In addition to making sure every student has food to eat during the day, California wants to make sure that the drinking water in schools are safe, so starting this month all public K-12 public schools will be tested for lead in the drinking water. The Division of Drinking Water (DDW) and the California Department of Education took the initiative to begin testing because “recent events in the United States have shown that lead in drinking water remains an on-going public health concern, particularly for children.” According to the World Health Organization (WHO), lead poisoning can cause irreversible damage to brain development.

As these laws show, children do not learn in a bubble. There are so many factors that can impact their performance at school. Providing an environment that is conducive to learning will yield the best results and give students a chance to use their education as a way to better their own lives and their communities.

More like this
How Getting An Abortion Has Changed From The ’60s Through Today
By Amanda Chatel
The UK Abortion Laws In 2022, Explained
By Sophie McEvoy
5 Ways To Stand In Solidarity With Women In America From The UK
By Sophie McEvoy
How To Fight For Reproductive Rights, Based On How Much Time You Have
By Courtney Young
Get Even More From Bustle — Sign Up For The Newsletter