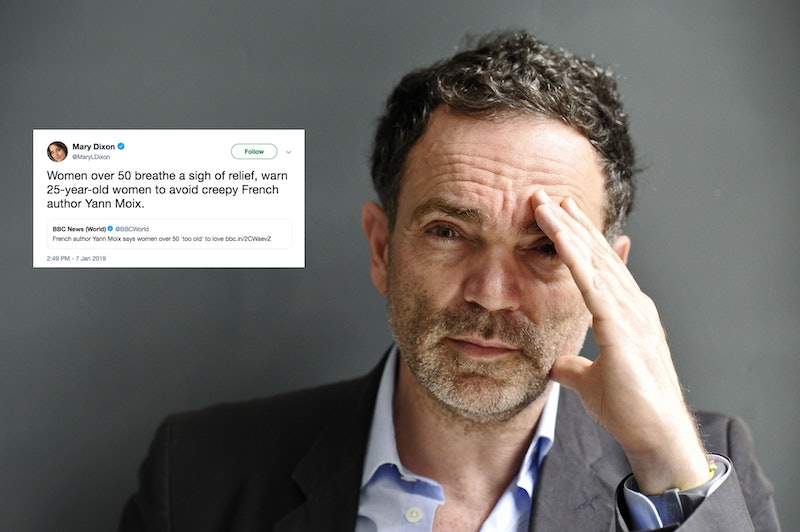 If you've been waiting for one of the most frustrating statements of the year, look no further than Yann Moix's recent interview with Marie Claire. While promoting his latest novel, the French author decided to give readers a little insight into his taste in women. Nope, we didn't ask for it either. Prepare to feel some unbridled rage.

Moix told the magazine that he was "incapable" of loving women over 50, stating they were "invisible" to him. (Incidentally, the writer turned 50 himself in May of last year.) He went on:

Yikes. But the inappropriate and actually, just offensive comments didn't stop there. Moix also declared his infatuation with Asian women, too. "A lot of people would be incapable of admitting that because it is racism," he said.

While these comments made mine — and probably many other people's — stomachs churn, it did spur an onslaught of responses and downright iconic clapbacks on Twitter. Many women over 50 took to the social media site to express their relief about not being on Moix's radar, while younger users made it clear that they wouldn't go near the author with a barge pole. All in all, it's safe to say that the comments made to Marie Claire haven't gone down well.

Moix has since responded to the backlash. Speaking to French radio network RTL, he said: "These are words that I do not regret because they only concern me. I like who I want and I do not have to answer to the court of taste, which for me is a total lack of taste."

He continued: "I do not consider myself a cougar, I do not reduce women to their physique, but I simply note from my experience [...] that each time a love story was strong and intense, it was with a woman younger than me." Digging a deeper hole for yourself there, buddy.

Moix did admit in the radio interview that he knows he acts like "a teenager" and "a child," and, because of that, "50-year-old women do not see [him] either," as they "have better things to do than go around with a neurotic person who writes and reads all day long." The writer went on to say: "It's not easy to be with me." By the way he talks about women, I'm not surprised by that at all.

And as annoyed as I am by his comments, I'm actually glad he said them. It confirms the sort of person he is, and I have a feeling he's not going to get any attention from women for quite some time. It also confirms that ageism is very much alive and well, and everyone needs to continue calling it out and doing everything they can to stop it. Here's hoping by the time I reach 50, such comments are left firmly in the past, where they should be.