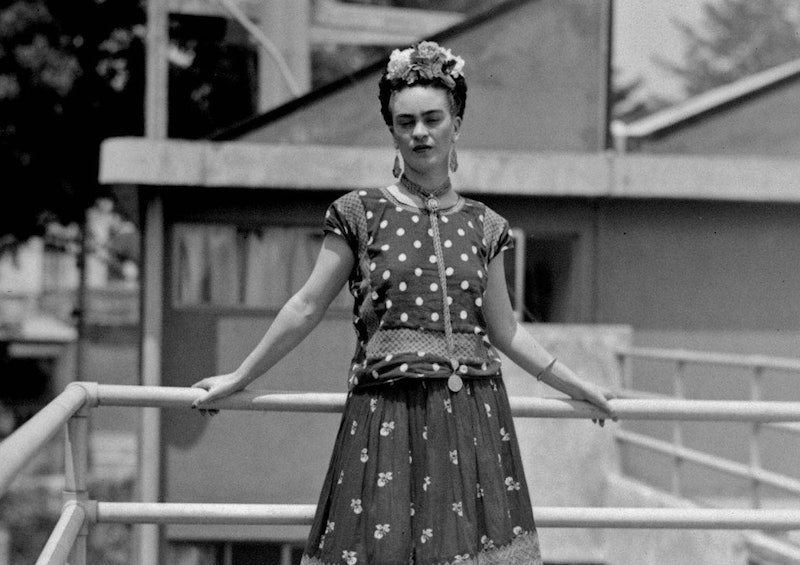 When you think of important historical figures, you don't necessarily think of their day-to-day lives. Their contributions take center stage, and you don't really consider how they were normal people that did a lot of non-extraordinary things throughout their weekdays. Like what brand toothpaste did Benjamin Franklin use, or did Sally Kristen Ride make her bed when getting up, or did she leave it messy? Did Coretta Scott King wait until the seasonal sales to shop? And how many spoons of sugar do you think Madeleine L'Engle preferred in her coffee? These questions seem to take these important figures out of the history books and make them feel a little more real and a little more like you and me. And thanks to an exhibition at London's Victoria and Albert Museum, we now know that Frida Kahlo used Revlon for her unibrow.

The exhibit will feature more than 200 of Kahlo's belongings, giving us an intimate peek into the life of the legendary artist. After she passed away from an embolism in 1954, her muralist husband, Diego Rivera, saved all her possessions in the "Blue House" they shared together near Mexico City, keeping a piece of her close with him. He specified that he didn't want her things moved until after his own death, which was in 1957, but the rooms stayed locked up until 2004, 50 years after her passing. Now the Victoria and Albert Museum has gathered her things and created an in-depth study of the day-to-day life of the feminist and counterculture artist.

“This is the real material evidence of the way Kahlo constructed her identity,” Claire Wilcox, senior curator of fashion at the V&A, told The Guardian.

Fans of the artist will be able to view the plaster corsets she wore to support her back after her near-fatal bus crash at 18, as well as an array of the colorful and paint-splattered dresses she wore day-to-day in both real life and in her paintings. There are also things like red leather fringed boots, retro cat-eye sunglasses, and a prosthetic leg with fabulous platform boots. The prosthetic leg is especially interesting — in 1953, a year before her death, she had to have her leg amputated but she took control of the situation by making her prosthetic as festive and happy as possible, going as far as tying bells around her shoes.

“Being Frida, it’s quite — if it’s possible — a joyful object. She has clad it in a bright red leather boot and had it embroidered and tied bells on to it. It is so powerful and it is very exciting that these objects were saved and they are coming to the V&A," Wilcox shares.

Her wardrobe, colorful casts, and makeup were an important part of her identity, where her friends noted that the more pain she felt, and the more incapacitated she became, the more elaborate and louder her outfits became.

But those who love makeup will gravitate towards the part of the exhibit that housed Kahlo's beauty staples — and they might be shocked to learn that the legend used the same drugstore brands they do in the here and now. Among her collection are two Revlon beauty products: a black brow pencil that she used to fill in her unibrow and make it more defined and shapely, and a lipstick called "Everything's Rosy," which was one of her favorite colors. Both products are discontinued seeing how they're over 60 years old, but it's still pretty cool to know that Kahlo had Revlon in her own makeup bag.

Next time you fill in your brow with a Revlon pencil or reach for a pink lipstick tube, know that you're connected with Kahlo. And do her proud.