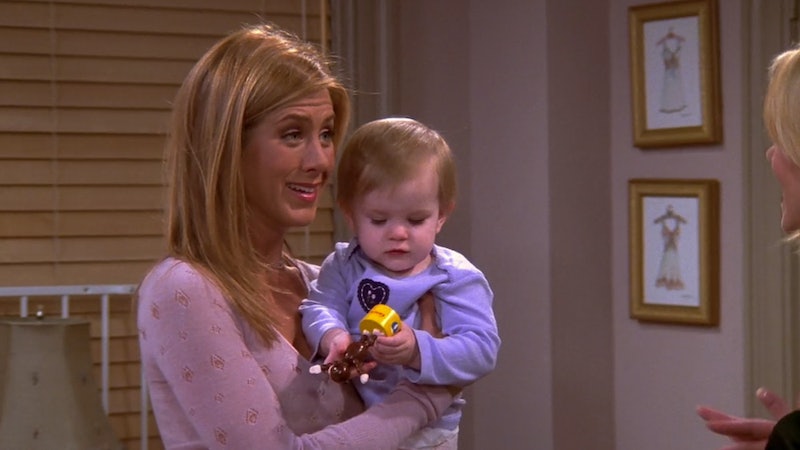 Friends’ “The One With the Male Nanny” episode could have featured a very familiar celebrity. Freddie Prinze Jr. said Friends almost cast Tom Hanks in the role of Sandy, the nanny of Ross (David Schwimmer) and Rachel’s (Jennifer Aniston) infant daughter, Emma. While the memorable gig ultimately went to Prinze Jr., he revealed that his cameo actually came together at the spur of the moment all thanks to Hanks’ busy film schedule.

“That [role of Sandy] was originally offered to Tom Hanks, but he wasn’t gonna make it back from his film on time,” Prinze Jr. told Entertainment Weekly in an interview published on Nov. 14, “So my agent called me and said, ‘Do you want to be on Friends?’ And I said, ‘Yeah, I’ll do an episode of Friends. That’ll be great.’ He said, ‘Yeah, it shoots tomorrow.’ and I was like, ‘What?’ He said, ‘Yes, tomorrow so I’ll send you the script.'” Bustle has reached out to Warner Bros. and Tom Hank's representatives for comment.

While Prinze Jr. was nervous on the set because he didn’t get to do a read-through of the script, he added that an encounter with Schwimmer helped ease his nerves. “He was so cool and so passionate and he had so much energy,” Prinze Jr. said. “He came into [my dressing] room and was like, ‘You’re going to love this, man. It’s like a little two-act play and the crowd is so engaged, and so into it. You’ll have a ton of fun, don’t worry about a thing.’”

“The One With the Male Nanny,” an episode in Season 9 of the NBC sitcom, followed Prinze Jr. as a nanny named Sandy who Rachel employed to care for her daughter Emma — a decision that does not sit well with Ross, who deems Sandy much too sensitive. The episode inevitably ends with Sandy helping Ross become more in tune with his own emotions.

In one particularly memorable scene, Prinze Jr. had to play a lullaby on a recorder to get baby Emma to sleep. According to Prinze Jr., he had very minimal time to actually learn how to play the instrument. He told EW, “I had just learned for the last like, four hours of my day there how to play ‘Greensleeves’ on the recorder because I’d never played it before.”

As for whether or not his role as Sandy has a place in the Friends reunion special reportedly in the works at HBO Max, Prinze Jr. isn't too sure. “I don’t know that he was a memorable enough character to make the cut,” he said. “If they got someone like Paul Rudd to come back in his role so we can see what he’s been up to since then, I think that would probably be more exciting. Or if they could pull off another Brad Pitt, or a creepy Winona Ryder performance, that would be great too.”