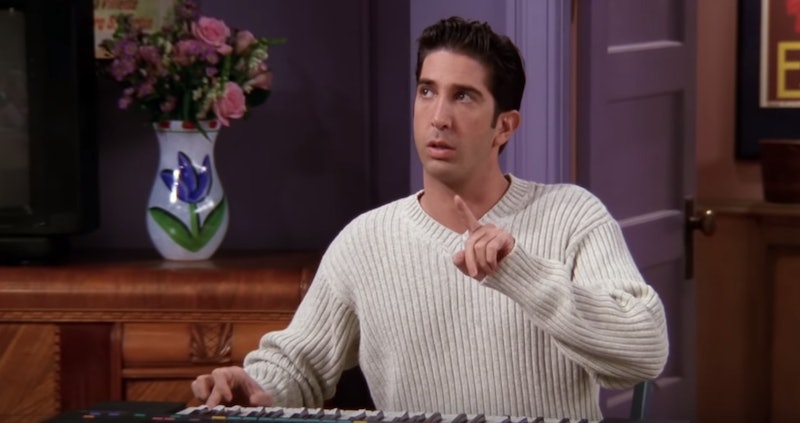 Could this news be more hilarious? On Tuesday, Oct. 23, police in the U.K. posted a bulletin seeking a burglar who looks like Ross from Friends and the internet showed up in a big way. From Twitter to Facebook, fans of the beloved series have been posting inside jokes, lines from the show, and priceless GIFs to add a little hilarity to the search. And while the suspected criminal has not yet been found, checking out some of these comical takes on this situation is a great way to keep your spirits up in the meantime.

UPDATE: David Schwimmer, who played Ross on Friends, responded to the reports on Twitter. "Officers, I swear it wasn't me. As you can see, I was in New York. To the hardworking Blackpool Police, good luck with the investigation. #itwasntme."

EARLIER: This all started on Tuesday, Oct. 23, when police in the British seaside town of Blackpool posted a CCTV photo of a man who was suspected of stealing a wallet, a jacket, and a cell phone from a restaurant in the area. The photo they posted, as reported by BBC, was of the suspect purchasing beer on the same day, and police captioned it: "Do you recognise this man? We want to speak to him in relation to a theft at a Blackpool restaurant on the 20th September."

They requested that anyone recognizing the man alert the authorities, offering a phone number and an email address that the public could use to report, and thanked citizens for their assistance. And then the responses started rolling in. BuzzFeed reported that the page had over 100,000 responses within 24 hours, many noting the resemblance between the alleged thief and David Schwimmer, who played paleontologist Ross Geller on Friends. And you know what? They're not wrong.

There were so many responses genuinely positing Schwimmer's involvement, in fact, that Blackpool police were forced to post a response clearing the actor's name:

"Thank you to everyone for your speedy responses. We have investigated this matter thoroughly and have confirmed that David Schwimmer was in America on this date."

And, as a cheeky nod to the theme song for the series, the official Blackpool Police account noted — "We're so sorry it has to be this way." And they were neither the first nor the last to get in on the Friends joke action. Here are just a few of the choicest responses to this very bizarre situation, which will be almost as difficult for Ross to worm his way out of as when he slept with the copy girl.

This post from @_youhadonejob1 gets double points for an "I'll Be There For You" reference and a play on the way Friends named episodes.

Many people questioned whether the thief was Ross at all, or merely his identical enemy Russ, returning to undermine him again, just as he did in the single dad's relationship with Rachel.

That's the question Chandler Bing would ask in a situation like this: "Could there be any more Ross'," mused @Judyinrichmond. And the answer is no, there couldn't.

As the BBC noted, if there's anyone who knows how to get himself out of a tight situation, it's a man who got his couch up a set of stairs with the pure force of screaming. "Apparently the police had him cornered then he performed a pivot manoeuvre and escaped," BBC Newsbeat tweeted. (Who could forget Ross' iconic "PIVOT" moment?)

All the top comments on the Facebook post are genuinely worth a look, but some favorites include a user who noted, "Lay off him. He grew up with Monica. IF YOU DIDNT EAT FAST YOU DIDNT EAT" and another who warned, "Please approach with caution. He is known to have studied Karate, and we believe he has mastered the art of Unagi, the state of total awareness."

Of course, we hope that the suspect is apprehended and the missing items returned soon, but in the meantime, there are worse ways to spend a morning than reading over these hilarious, Friends-themed responses.

More like this
24 Years Ago, 'Friends' Dropped Its Most Underrated Ross & Rachel Episode
By Grace Wehniainen
What Is 'Pretty Wild' Star Tess Taylor Up To Now?
By Morgan Leigh Davies
The 'Skins' Cast Shared The Reunion We’ve Been Waiting For
By Sophie McEvoy
Netflix Reveals First Look At Wednesday In The 'Addams Family' Spinoff Series
By Bustle Editors
Get Even More From Bustle — Sign Up For The Newsletter