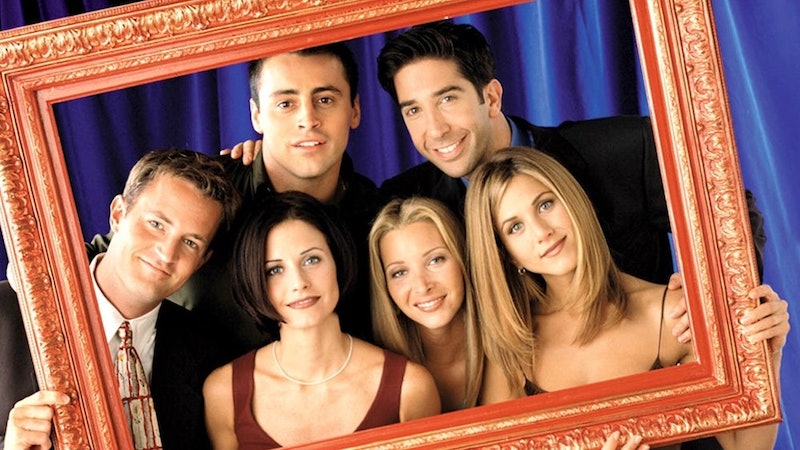 So no one told you life was gonna be this way, and yet here we are at the end of an era. WarnerMedia announced on Tuesday, July 9, in an official press released provided to Bustle that Friends will be leaving Netflix in 2020 and become available to stream on WarnerMedia's new streaming platform, HBO Max. The platform is described as being "Maximized" with an extensive collection of exclusive original programming (Max Originals) and the best-of-the-best from WarnerMedia’s enormous portfolio of beloved brands and libraries. Hence where an iconic sitcom like Friends comes into the picture. So if you can't bare the idea of parting from your favorite Central Perk gang, all 236 episodes will still be there for you — just not on Netflix.

Netflix confirmed the news on Twitter, posting about how sad it is to see such a great series leave its service. "The One Where We Have to Say Goodbye," Netflix tweeted shortly after the announcement. "We're sorry to see Friends go to Warner's streaming service at the beginning of 2020 (in the US). Thanks for the memories, gang." The tweet was also accompanied by a coffee emoji — a fitting nod to the show's preferred drink of choice.

Friends won't be the only series making its way over to this new streaming platform, though. Accompanying Ross, Rachel, Joey, Phoebe, Monica, and Chandler on this journey will be Pretty Little Liars and The Fresh Prince of Bel Air along with brand new CW shows, including Batwoman and Katy Keene, giving TV lovers plenty of incentive to add this streaming service to their repertoire. (The launch date and cost of HBO Max, however, has yet to be revealed.)

In regards to original content, Greg Berlanti, best known for his work on shows like Dawson's Creek, The Flash, Riverdale, and You, has signed on to create “four movies focused in the young adult space." Meanwhile, Reese Witherspoon's Hello Sunshine company is set to produce at least two films for the streaming platform.

Sadly, this isn't the first major series to announce its pending departure from Netflix. Back in June, news broke that The Office would be leaving Netflix in 2021 and move to NBCUniversal's upcoming streaming service, which is set to debut sometime next year. Much like what happened with Friends, Netflix took to social media to confirm the show's departure, tweeting: “We're sad that NBC has decided to take The Office back for its own streaming platform — but members can binge watch the show to their hearts' content ad-free on Netflix until January 2021."

Naturally, the idea that viewers will have to purchase two additional streaming services in order to watch The Office and Friends isn't exactly the ideal scenario (especially in regards to our bank accounts). Yet these sitcoms are still so beloved even all these years later, so it'll be interesting to see how far fans are willing to go keep these highly rewatchable shows an option.

Either way, it's more important than ever before to enjoy these characters while you still can.

More like this
Jennifer Aniston Is Still Wearing That 'Friends' Dress She Stole From Monica's Closet
By Jake Viswanath
Emma Thompson, Lashana Lynch, & Stephen Graham Lead Netflix’s 'Matilda'
By Sophie McEvoy
Everything To Know About 'Scream 6'
By Jack Irvin and Jake Viswanath
Why You Loved 'One Tree Hill' So Much — And Still Do
By Sabienna Bowman and Radhika Menon
Get Even More From Bustle — Sign Up For The Newsletter