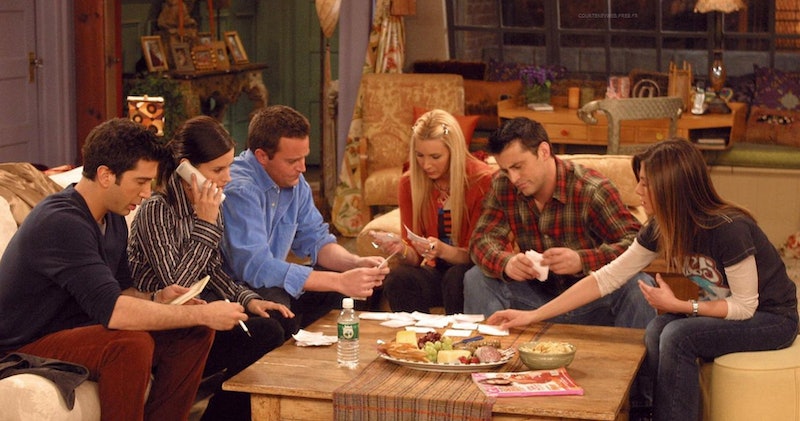 "The one where everyone lost it after hearing it was leaving U.S. Netflix." Real talk. In a world where it seems like there's a new streaming service on the daily, it feels like absolutely nothing is safe. It's here one day, gone the next. Because when most new network streaming platforms launch, they want the content that everyone's been enjoying on other streaming platforms back. Keeping it network exclusive. Yes, exclusivity ruins it for average Joeys again. However, UK Netflix has confirmed that Friends is safe for now.

After the rumour mill started spinning, UK fans just needed to know what was happening to the series. Happily for Friends-lovers, a Netflix UK spokesperson told Digital Spy the changes "only apply to the US and there is no impact on the UK".

This could be because Warner's new streaming service, HBO Max, appears to only be launching in the U.S. for now, with seemingly no plans for it to become available in the UK anytime soon. So this maybe it's actually the first time ever that us being a bit behind when it comes to TV releases is actually a good thing.

The show has been available to Netflix UK users since a shock reveal on New Year's Day in 2018, in perhaps one of the streaming giant's biggest drop-the-mic moments ever. However, as with any old show on a streaming service, fans undoubtedly lived in fear that one day it would disappear from Netflix. And on Tuesday it seemed like that's exactly what could be happening. Thankfully we now know this isn't the case, but that was a scary few hours.

Like I said before this is all to do with yet another streaming service. I mean how many subscriptions can one person have? In a press release, the head honcho at WarnerMedia Bob Greenblatt said the streaming platform is unprecedented.

"HBO Max will bring together the diverse riches of WarnerMedia to create programming and user experiences not seen before in a streaming platform. HBO’s world-class programming leads the way, the quality of which will be the guiding principle for our new array of Max Originals, our exciting acquisitions, and the very best of the Warner Bros. libraries, starting with the phenomenon that is ‘Friends."

Wow, what will be different about it then? And look don't lie and say the mere sight of the phrase "original series" doesn't send you wild. A few highlights from the announcement include an animated series of The Gremlins, a new sitcom starring Anna Kendrick called Love Life, content from Reese Witherspoon's production company Hello Sunshine (AKA the one that makes Big Little Lies, no less), and so much more.

Although there's been no announcement about the streaming platform coming to the UK as of yet, considering how huge their catalogue is — it could well happen soon. And that could mean no more Friends on Netflix. If I were you, I'd make the most of it while you still can. Because before you know it you could be forgetting to cancel that free trial to HBO Max. AKA, the modern condition.

More like this
The Banned 'Friends' Ad Shows Monica As You’ve Never Seen Her Before
By Sam Ramsden
'Abbott Elementary' Fans Probably Missed This 'Parent Trap' Easter Egg
By Sam Ramsden
Rupert Grint Just Shared A *Major* Update About Ron Weasley’s Future
By El Hunt
'Consent' Is Not Just One Person’s Story, But Hundreds
By Shahed Ezaydi
Get The Very Best Of Bustle/UK
Sign up for Bustle UK's twice-weekly newsletter, featuring the latest must-watch TV, moving personal stories, and expert advice on the hottest viral buys.