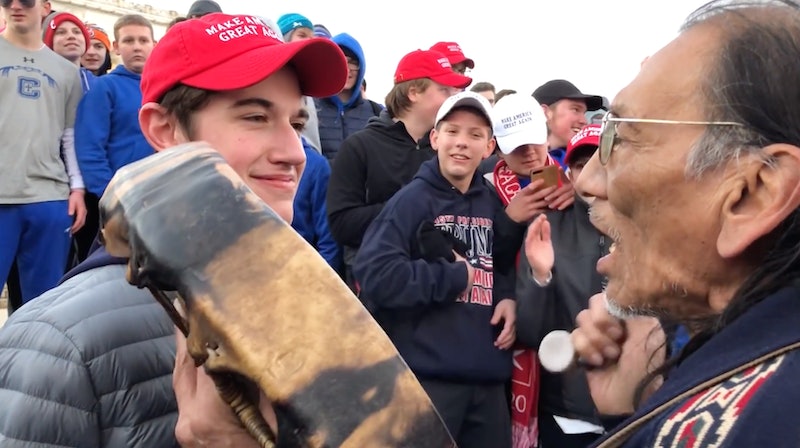 A group of teenagers wearing MAGA hats surrounding a Native American activist at the Indigenous Peoples March has continued making the rounds on the internet since a video account of what happened first went viral on Saturday. Now another video was uploaded to YouTube showing the same encounter but from another angle has some on Twitter asking if the first reported version is accurate.

Nathan Phillips, the veteran indigenous rights activist and Omaha tribe elder in the video, was beating his drum and singing a song of unity while surrounded by the teenagers who were wearing "Make America Great Again" hats and chanting. One teenage boy in particular stood very close to Phillips and smirked. Many of the kids reportedly attend Covington Catholic High School in Park Hills, Kentucky, and were in Washington D.C. for an anti-abortion event. Bustle has reached out to the school for comment.

Phillips said afterwards that he felt trapped when they surrounded him. "What the young man was doing was blocking my escape," Phillips later told CNN. "I wanted to leave. I was thinking, 'How do I get myself out of this? I want to get away from it."

Some on Twitter and far-right media site Breitbart have seized on the new video to show that Phillips initially approached the teenagers, not the other way around. He appears to be walking toward the Lincoln Memorial but then can't proceed because the kids are standing on the steps. People then do close in behind Phillips.

Comments on Twitter ranged from saying that the longer video "exonerated" the kids to others asking if it "put to rest the folks who keep saying the Native marchers 'started it'?" One Twitter user who commented said that it "seems like [Phillips] was just trying to diffuse the situation." The lack of chaperones was also criticized online.

Phillips did acknowledge in another interview that he had tried to keep the teenagers apart from a group Black Israelites. "There was that moment when I realized I've put myself between beast and prey," Phillips told the Detroit Free Press. "These young men were beastly and these old black individuals was their prey, and I stood in between them and so they needed their pounds of flesh and they were looking at me for that."

The boys' school condemned their actions and said it would be investigating the students and may potentially expel students if that is found to be "appropriate." "We extend our deepest apologies to Mr. Phillips," the statement read. "This behavior is opposed to the Church’s teachings on the dignity and respect of the human person."

In an Instagram video posted after the encounter, Phillips said he wished that the young boys would channel their energy elsewhere. "I wish I could see that energy of the young mass of young men to, you know, put that energy into, you know, making this country really, really great by helping those who are hungry, you know."

On Twitter, Rep. Deb Haaland, who is a member of New Mexico’s Laguna Pueblo tribe, blamed President Trump for what happened, too. "The students’ display of blatant hate, disrespect, and intolerance is a signal of how common decency has decayed under this administration."

The new video does provide more angles, but the opinions that viewers of the first video arrived at — on both sides — may not change.