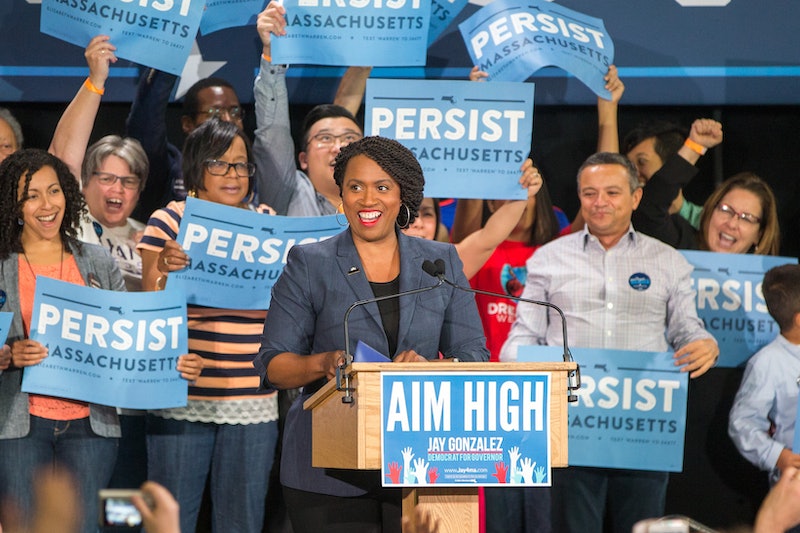 A record number of women are running for office in November's midterms, but the battle for gender parity is far from over. According to groups who help women run for public office, fundraising as a woman candidate often takes more work than fundraising as a male candidate, meaning female candidates spend more time and energy hoofing it on the campaign trail.

"We know that, historically, men have been able to use 'the old boys' club' for campaigns, and that means that they’ve really been able to network on the golf course, in private clubs, and had an easier time fundraising, in that regard," Amanda Hunter, communications director for the Barbara Lee Family Foundation, an organization which works to promote gender equality in American politics, tells Bustle. Women candidates, Hunter says, often report being excluded from financial circles where the wealthiest donors are located.

Because those wealthy donor circles often exist within "corporate associations like trade associations" which don't include many women, "there are fewer women to make introductions and open doors [and] even fewer women of color" to do so, Hunter says. As a result, women running for office often find they have to do more legwork than their male counterparts in order to make up the difference.

In doing so, women running for office tend to invest their time in building connections with would-be donors and potential voters, Hunter says. But while this fundamentally requires more work, there can be an upshot, largely because these campaigns also require female candidates to have a greater presence within the communities that they actually want to represent.

Hunter pointed to successful primary campaigns run this year by Alexandria Ocasio-Cortez in New York, or Ayanna Pressley in Massachusetts. These candidates, she says, “didn’t spend as much money as their opponents… they did other methods of really physically getting out to the community and reaching voters where they are."

Christina Reynolds, the vice president of communications at EMILY's List, a political action committee that backs pro-choice female Democratic candidates, affirms this notion. She tells Bustle that this kind of on-the-ground campaigning can have major benefits for would-be lawmakers.

"It’s harder to do — it’s much easier to raise one big check, but I think it also — it gives you a broader base of support," Reynolds says. "And it’s also, for our women, that’s who they’re going to represent —the people who can give five dollars, not the ones who can give $5,000."

Those "big check" donations can be tremendously helpful, Reynolds says, and groups like EMILY's List definitely appreciate the help they provide. But at the end of the day, donors who give out large sums aren't necessarily a Democratic woman candidate's target audience. "Fundamentally," Reynolds says, "these women are looking to be elected to fight for all Americans, not just big corporate interests, so they understand that they’re going to have to go at it the harder way."

Several reports in recent months have claimed that female candidates struggle to raise as much money as male candidates, but Reynolds tells Bustle that such sweeping statements don't capture the full story.

"If you look at the toss-up races, women are actually doing much better," she says. "They’re certainly breaking previous records. They’re doing better compared to what you might expect."

And there's no doubt that running a campaign is expensive. Funding a staff, hosting campaign events, buying ad space — those costs add up. But organizations who help women run successful campaigns argue that there's also a unique benefit to meeting small dollar donors where they're at. "I think that these women are inspiring people," Reynolds says of female Democratic candidates. "And that’s how they’re doing it."

More like this
Here's How Often You Should Stretch To Improve Flexibility
By Carolyn Steber
24 History-Making Black Women You Probably Didn't Learn About In School
By Ayana Lage and JR Thorpe
25 Inspiring Quotes From Black Women To Celebrate Black History Month
By Kyli Rodriguez-Cayro and JR Thorpe
Eurovision Has Been Given A Whole New Look Ahead Of Its Liverpool Debut
By Bustle UK
Get Even More From Bustle — Sign Up For The Newsletter
From hair trends to relationship advice, our daily newsletter has everything you need to sound like a person who’s on TikTok, even if you aren’t.