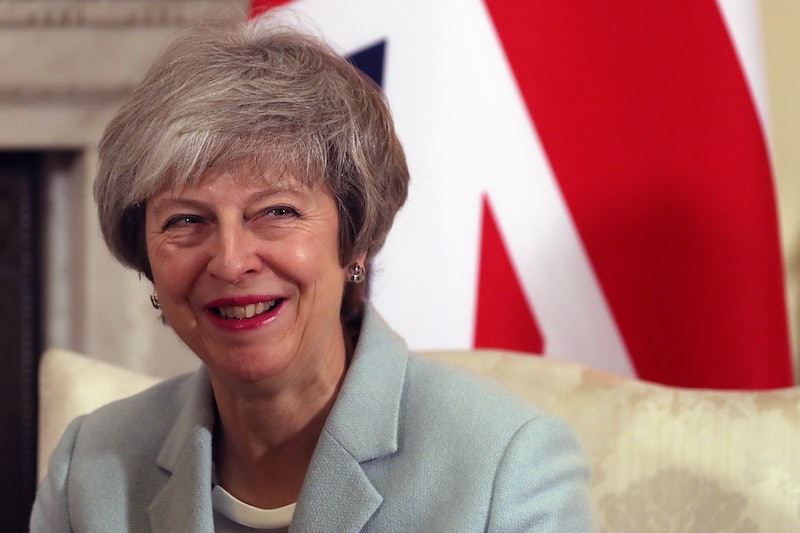 Let's face it: things are a bit grim ATM. But one thing that the UK is pretty good at is having a sense of humour, especially during testing times. And, honey, at this point, with all the crazy shenanigans going on in the Houses of Parliament, the only choice we have is laughing or crying. So, I've had a little dig around the internet and found a few funny memes about Brexit to help get you through these dark days.

The ongoing saga that is Brexit feels more like a Punch and flipping Judy sketch than real-life politics (and, BTW, I refuse to say who the crocodile is in this situation). If you had any suspicions that the UK is a laughing stock right now, please just pop abroad and pick up a newspaper and/or talk to anyone — well, while you still can, anyway. Because have you seen what's happening regarding travel RN? But let me tell you, one day, when I tell my niece and nephew I was proposed to 5 times, I'll pretend it was for my engaging presence, elegance, and charm, and not my Irish passport.

As the UK government continues to endlessly gab on about its very own own goal, the people of the UK (and the whole world) watch on in horror, dismay, and, of course, LOLs.

I mean, firstly, you have Theresa May's shocking negotiation skills.

And then there's the debating skills of certain Brexiteers...

Brexit has been seen by many Brexiteers as basically a chance to "celebrate Britishness." You know, awesome things like a lamb doner kebab. Hold up. Weren't doners created by Turkish immigrants in Germany? Awkies.

And like Danny Dyer said, where is David Cameron RN?

What are we Brits feeling like right now? Yep, you guessed it. An idiot sandwich.

I guess one thing we have to hold on it is the fact that the U.S. government is also kind of fudging it at the moment. And what kind of an Irish woman would I be if I didn't flag the plight of Ireland? Being in Ireland is like being sat in between the most obnoxious people ever on a long-haul budget flight RN.

Y'all, yet again us Irish people have been left in a crappy situation by the UK. But don't worry, we are killing it with memes.

So, maybe it looks like people were right to be concerned about a campaign that was led by people with no actual plan of operation.

Like, let's talk about nipping to Paris via the Channel Tunnel...

Or any of the nonsensical ideas that Leavers were holding onto...

And, y'all, everyone is concerned about the pound, but what about the rest of the currency?

It must be pretty tempting to think about closing your eyes and letting technology take the wheel.

Or maybe she just needs to get the big guns in.

Because, let's be real, Andy has already experienced something pretty similar.

But, hey, don't worry y'all, we have lots of reading material already at our disposal, so gird your loins and prepare, because, like winter in Game Of Thrones, Brexit is coming