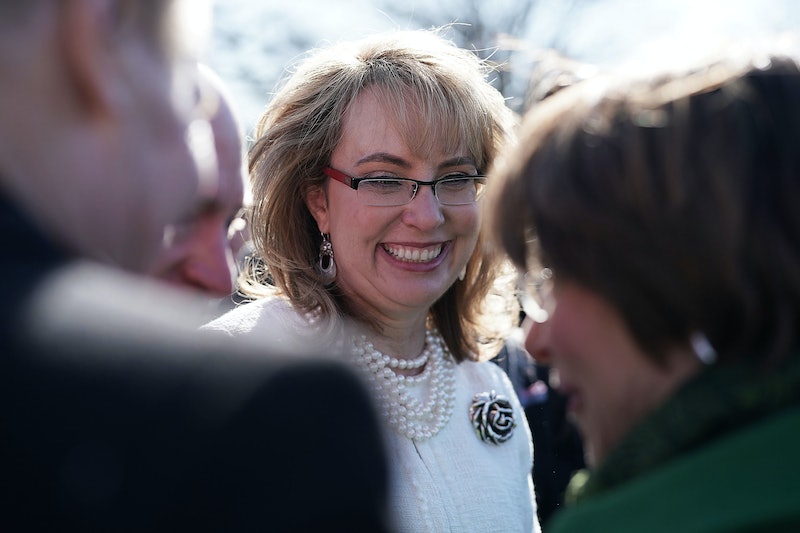 Most of the students meeting with Gabby Giffords were only five years old when she was elected to national office, and only nine years old when she was injured, but their awe of the former congresswoman is apparent. When she speaks to them — a rehearsed paragraph of motivational lines she's practiced with a speech coach — the room falls to a hush.

"I've seen great courage when my life was on the line," Giffords tells the New Jersey high school students. The former Arizona congresswoman suffered a gunshot wound to the head in 2011 when she was shot at point-blank range during a "Congress on Your Corner" event outside a Safeway grocery store in suburban Tucson.

"Now is the time to come together, be responsible, Democrats, Republicans, everyone," Giffords tells the group. "We must never stop fighting. Fight, fight, fight! Be bold. Be courageous. The nation's counting on you."

While it's plain to see the work Giffords puts into enunciating her words, the emotion she shows through her minute-long speech is also obvious. It’s also clear that while her sentences come slowly, she may be the sharpest one in the room. When the state's former Governor, Richard Codey, tries to remember which recent shooting suspect had his firearms previously seized by police ("Parkland?," one teacher offers), only Giffords knows the answer.

“Waffle House,” she says, without missing a beat.

As longtime advocates for reforming the nation's gun laws, Giffords and her husband, Captain Mark Kelly, are entering a new phase in their fight for gun safety. They're joining forces with the student activists who sprang up in the wake of the shooting in Parkland, Florida, launch a voter registration program they hope will sway the November midterm elections.

Giffords and Kelly, along with Everytown for Gun Safety and NextGen America, have launched a national voter registration drive called Our Lives, Our Vote, with the aim of registering 50,000 18 and 19 year olds to vote in November. The groups are putting $1.5 million behind the initiative.

"Now is the time to come together, be responsible, Democrats, Republicans, everyone."

This is the second phase of the grassroots campaign that sprang up in the wake of the Parkland shooting, which peaked with more than 800 sister marches around the world on the March 24 March For Our Lives. In the three-and-a-half months since students thousands of miles from Parkland memorialized the lives lost with vigils and rallied lawmakers for change with school walkouts, a handful of states have enacted tighter gun control laws, but federal action remains elusive. Now, students are aiming to turn their activism into raw political power by registering young people to vote politicians in favor of gun control into office.

While the Parkland students and their allies are on Phase Two, Giffords and Kelly are on Phase 200. The attempt on Giffords' life, which claimed the lives of six people who attended her event that day, including a nine year old girl, didn't lead to an overhaul of the nation's gun laws. After the Sandy Hook Elementary School shooting in 2012, when 20 young students and six adults were shot and killed, legislation to ban assault weapons and require universal background checks looked possible. Those measures failed in the Senate. And so, Kelly is unsure that activists will have more success this time around.

"[This] feels a little bit different, but I think I've said that before."

"[This] feels a little bit different, but I think I've said that before," Kelly tells Bustle at the event he and his wife held with students and congressional candidate Mikie Sherrill of New Jersey in May. "So I'm not 100 percent certain if we've turned the corner. I think we're at the corner looking down the street. We've got to see how the rest of this goes."

"The message I want to send them is they've got to get out... to register to vote, and then vote, and campaign for candidates that they feel are going to do what's in their best interest," Kelly says. "If they do that, they can have a very strong and fundamental part in making change. If they don't, well, then they just kind of did a walkout and it didn't really amount to much."

The #NeverAgain Generation Gets Professional Attention

With the March 24 March For Our Lives and April 20 National School Walkout Day in the rearview, many are wondering whether the student-led movement has enough staying power to sway one of the most partisan debates in the country.

As student activists get ready to close out the school year, they're setting their sights on the next battle ahead: The 2018 midterm elections. Giffords, the name of the organization led by Giffords and Kelly, wants to give them a boost.

"They were so incredibly eloquent that somebody leaned over and said to me, 'Well the good news is, they can't run against you.'"

"I know these... kids in here, probably they're all going to vote," Kelly tells Bustle outside of his old high school Spanish classroom in New Jersey. The event was held at his former high school in West Orange. "They've got to get their friends to do that as well. And then they have enormous influence."

"It's really powerful,” says 17 year old Erin Arnold, a senior at West Orange High School who attended the listening session with a handful of other students in early May. “You have to keep going, and I see that through the fact that they kept going with their foundation and they've been fighting for so long.”

The seven high school students invited to sit down with Giffords and Kelly took the lead in organizing their school's memorial to the Parkland students on March 14, the one month anniversary of the attack, and led a walk-out on April 20, the 19th anniversary of the Columbine shooting. On a warm spring day, they traded their morning classes for a master class in activism from the husband-and-wife team and with Sherrill, who's hoping to follow Giffords' footsteps into congress come November.

"I am so energized by the young people in this district. The students were getting up one by one to speak about why they were advocating for gun safety legislation and the experiences they had," Sherrill tells Bustle, recalling a local March for Our Lives event earlier this year. "They were so incredibly eloquent that somebody leaned over and said to me, 'Well the good news is, they can't run against you.'"

Sherrill, who fought to keep illegal guns off the streets as an Assistant U.S. Attorney in her home state, is a mom of four and a former Navy pilot. She considers both Giffords and Kelly to be personal heroes — Giffords, who cracked the glass ceiling of women in politics as a national elected representative at the age of 35, and Kelly, a Navy aviator himself. The couple's organization is supporting pro-gun control candidates like Sherrill in this election cycle. The meeting with students is part Sherrill campaign event and part Giffords listening tour as the adults mine students for ways they — with their organizational prowess, fundraising abilities, and Washington connections — can help the second phase of the student-led gun control movement deliver new voters to the polls.

From High School Halls To Congress

According to the students, the school's voter registration booths draw around ten kids every lunch period. While they knows that's a drop in the bucket of the national movement, students said meeting Giffords and Kelly connected them to the wider movement.

“We have to keep going,” Arnold says. “After you have a walkout, you have to register people to vote. After you register people to vote, you need to make sure they actually go to vote. When people are going to vote, you need to make sure they're educated on candidates. Just keep going with the momentum, and when you have an idea and you think it's going to result in something, you just have to start doing it, because if you don't, then people are going to forget.”

“It feels sometimes like you're only doing very small things."

Seventeen-year-old Kayleigh Arnold, Erin's twin sister, has always considered herself politically active, but she says she’s never felt this kind of enthusiasm from students or support from adults.

“It's very inspiring because I know how she's been personally affected,” Arnold says. “It feels sometimes like you're only doing very small things... for [Giffords] to come and to meet with us makes it really feel like we're doing something that has a real impact," she says. "People are noticing."