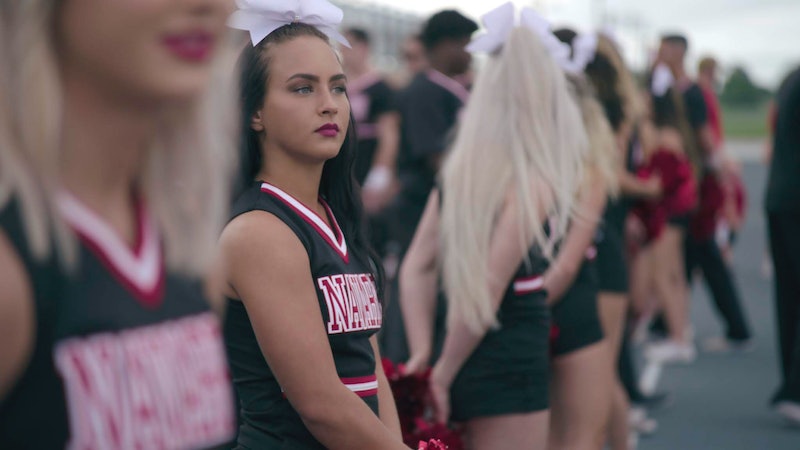 There were few Cheer moments as instantly uncomfortable as when Gabi Butler's mom told her to eat jackfruit instead of an egg so she doesn't eat as much. In fact, the tension between Gabi and her parents quickly became a sticking point for fans. But, Gabi from Cheer revealed that she watched the show with her parents — and, according to the athlete, it totally changed their relationship.

During a Thursday, Jan. 23 Ellen DeGeneres Show appearance, Gabi responded to the backlash her parents have faced for their seemingly controlling behavior. "When the show came out, we all watched it together as a family and we were like, 'Oh wow.' It was a really big eyeopener for all of us," Gabi revealed. "My parents were like, 'Wow, maybe we do need to let her be more independent and let her make her own decisions for herself.'"

Cheer shined an unflattering light on the 22-year-old cheerleading superstar's relationship with her parents, who were shown working her hard, cramming her schedule full of appearances, and telling her what she should and shouldn't eat. In Episode 2, Gabi's mom explained how intense her daughter's schedule has been since she was 14, saying that she's basically been flying across the country every week without zero downtime. At one point in the show, Gabi complained that she sometimes wished she had a so-called normal life, especially with being in the spotlight and the negativity she's received on social media.

Since the show premiered on Netflix, fans have accused her parents of using their daughter as a way to make money, exploiting her constantly, and having a harmful impact on her diet and nutrition, to name a few. All the hate actually prompted Gabi to release a statement on Twitter defending her parents prior to her appearance on Ellen. In her Jan. 8 post, she called her parents "amazing" and explained how grateful she is for them. "They have helped shape me into the person, athlete and coach I am today," she wrote. "So please stop with the negativity towards them. They are my biggest support system and have helped me to be on top of my game."

Looking back, Gabi told DeGeneres that she's grateful for the show, and all that came along with it. "I really just think that it was great for me because I really started to love myself more and being like, I need to be more positive about myself," she said. Hopefully part of that positivity includes eating an egg whenever she chooses.

More like this
Move Over, 'Sunset'! The Drama-Filled Trailer For 'Selling The OC' Is Here
By Nola Ojomu
This 'Bridgerton' Polin x 'Love Island' Crossover Is Everything
By Darshita Goyal
'Selling Sunset's Jason Oppenheim Has A New Model Girlfriend
By Alyssa Lapid and El Hunt
'Indian Matchmaking’s Vinesh Is Still Single After Season 2
By Kadin Burnett
Get Even More From Bustle — Sign Up For The Newsletter