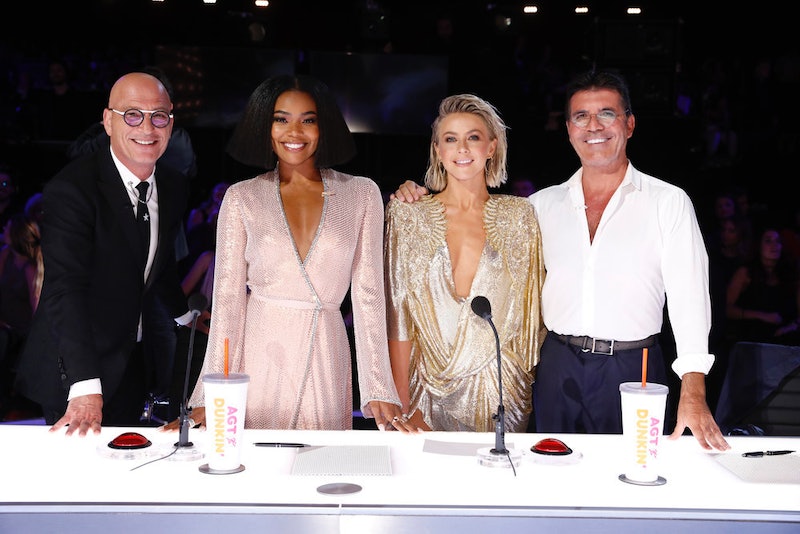 Just a few days after she and fellow judge Julianne Hough announced their decision to leave the reality competition show, Variety claimed that Gabrielle Union reportedly left America's Got Talent after witnessing "offensive" incidents that went unaddressed by production. Bustle reached out to representatives for Union for comment, but did not receive an immediate response.

According to the outlet, both Union and Hough had shared their concerns about "racist" jokes as well as constant comments about their appearances with producers at NBCUniversal. Bustle also reached out to reps for NBC and Hough.

All of the incidents reportedly contributed to what Variety called a "toxic work environment," which then led to Hough and Union's departure as judges. Per, E! News, one of the most offensive alleged incidents reportedly involved former late night host Jay Leno, who acted as a guest judge and reportedly made a joke that a photo of judge Simon Cowell and his dogs "looked like something one would find 'on the menu at a Korean restaurant.'" (Bustle has reached out to representatives for Leno for comment, but did not receive an immediate response.) The joke reportedly upset many of the people in the room, including Hough and Union, the latter of whom wanted to report the joke to the Human Resources department. According to the outlet, though an executive at NBC was informed of the joke, a report never actually made its way to HR.

Variety also claimed that both Union and Hough received "excessive notes" on their appearances, and the constant critiques of the dancer's hair, makeup, and wardrobe reportedly "impacted her morale and led to tensions." Union, meanwhile, was reportedly told that her hairstyles were "too black" for the America's Got Talent audiences, according to multiple sources who worked on the show.

While Union has not publicly commented on the reports, Hough did tell the outlet that her departure from the show was amicable, and refuted claims that she had a negative experience on set. "I had a wonderful time on America’s Got Talent, I loved working with the cast, crew and producers," Hough said in a statement. She continued, "I am happy to continue my working relationship with NBC," noting that she will appear in two future shows with the network: Holidays With the Houghs, alongside her brother Derek Hough and Christmas in Rockefeller Center.

Meanwhile, NBC and Fremantle, who produce the show, told Variety that there was no backstage drama that led to Hough and Union not returning to the show, saying that the "judging and host line-up [of AGT] has been regularly refreshed over the years." Their statement also addressed the claim that there were offensive or racist incidents on set. "America’s Got Talent has a long history of inclusivity and diversity in both our talent and the acts championed by the show," they said. "NBC and the producers take any issues on set seriously."

As of yet, NBC has not announced who will replace Union and Hough as judges on Season 15 of America's Got Talent, though host Terry Crews is set to return, along with Howie Mandel and Simon Cowell.