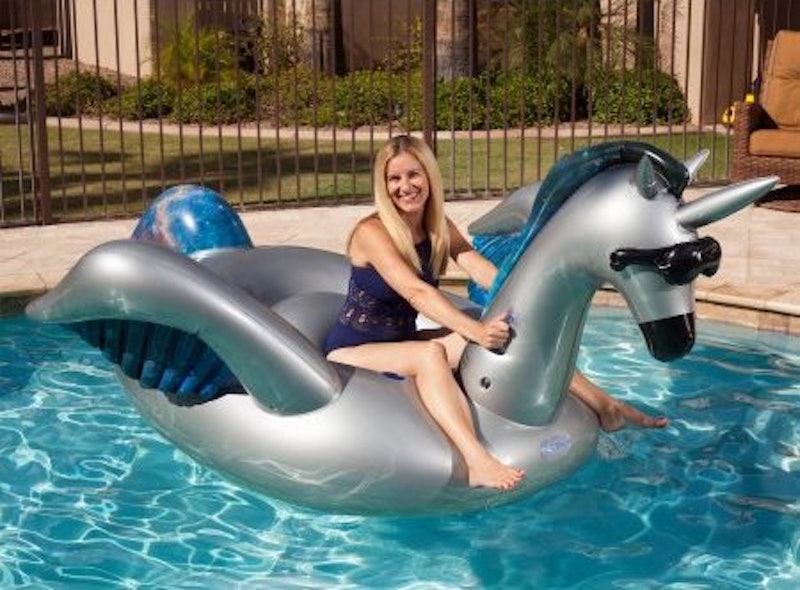 After surviving the winter that wouldn't end, we're looking ahead to warmer days. There was once a time when summer meant vacation, spontaneous trips to the beach, and sleeping all day. Unfortunately, life as an adult means that most of our day to day schedules won't change — it'll just be hotter outside as we go about our lives as usual. And that means your go-to uniform of all-black everything may, too, become uncomfortably hot, but as all summertime goths know, we can, and do, contain multitudes — and that means appreciating a good unicorn pool float just like any other grown-ass woman on Instagram. If you're looking for a pool accessory that's as dark as your heart, the GAME Mystique Alicorn Unicorn Pool Float is the goth summer accessory of your dreams.

This delightful creation would be notable for the inclusion of sunglasses alone, since it's a freaking giant unicorn pool float wearing sunglasses, for heck's sake. What though, in particular, makes it... goth? Aside from its sunglasses, which impart a shadowy gloom over everything it looks out onto, its galaxy-colored mane and silver coat remind the rider of both 1) the vast emptiness of space, and 2) the coldness of life, each essentials as we navigate the warmth, the joy of summertime. Why shouldn't we goths, too, get to experience the delight of a giant unicorn pool float, while we languidly Instagram the summer away?

Regardless of the manufacturer's intent in creating this product, it's a pool toy that's as unimpressed as you are, and I love it for that. Unicorns seem like the ultimate goth mascot, anyway. What could be more metal than a literal spike protruding from your forehead? Nothing, that's what. Did I mention that it also has cupholders?

You can thank Great American Merchandising & Events (GAME), for creating such a masterful pool float. You can purchase this pool toy on Walmart's website for $44.99 with free shipping, though you might want to note that it isn't currently sold in stores. You can also go straight to the manufacturer or order from e-commerce company VMInnovations, which also makes a version that's more of a classic rainbow unicorn pool float, for those of you with sunnier dispositions. (Yes, the rainbow one still has sunglasses and cupholders, because it's 2018, and we deserve nice things.)

There's no reason for you to not love this unicorn, especially if you're trying to reconcile enjoying summer (like everyone else) with your inner goth spirit. Transforming your personality sounds like hard work, but if you're dedicated to it, anything can happen. Can I, a woman with personal style about exciting as mild salsa, be goth in 2018? Probably not, but who knows? Anything can happen. This unicorn will get me at least halfway to goth.

There's clearly a demand for unicorn products that appeal to those of us on the slightly less sunny side of the street. Etsy has nearly 2,000 results for "goth unicorn," so I'm not pulling this out of thin air. It's the only mythical creature that can warm just about anyone's heart, so it's no surprise that the float is such a hit. And if one giant novelty pool float isn't enough, you could also pick up a similar stingray float from GAME. Granted, it's not a galaxy unicorn, but if you can't bring yourself to fully commit to the goth aesthetic, start here and see what happens. At least it also has shades on.

Hardly a week goes by without a gigantic pool float tearing through the internet, but finally we have an option that's as goth as your heart. Pool party on, summertime goths.