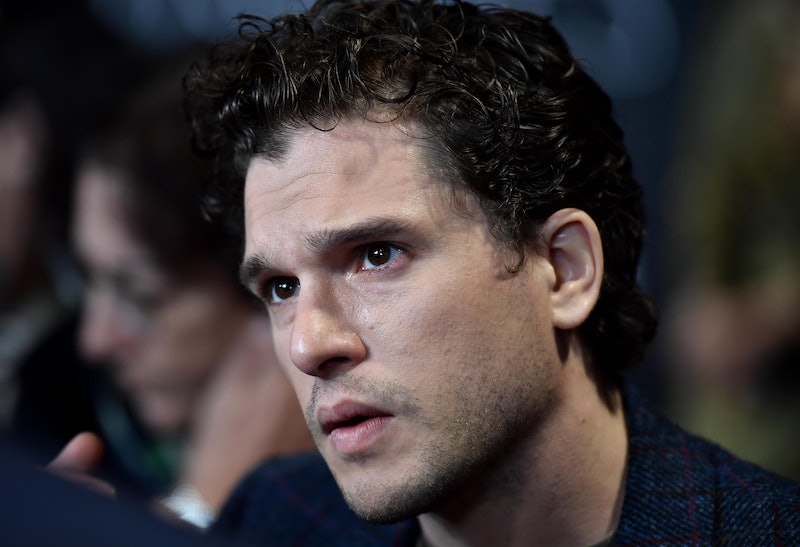 It might have infuriated half the internet, but Game of Thrones' Kit Harington was pretty happy with the show's ending as well as Jon Snow's final character arc — except for one tiny detail. Speaking to the Hollywood Reporter, Harington said he "loved" Jon's return beyond the Wall with the Free Folk, adding, "that bit really made me cry." Even Daenerys' death at Jon's hands, while he was "completely surprised" by it, ultimately made sense in his eyes. But the one scene that ticked him off? The Night King's death at the hands of Arya Stark. "I was a bit pissed off, only because I wanted to kill the Night King!" he said.

Not that the decision didn't make sense to Harington, of course: "I was so happy for Maisie and Arya," he continued. "I was secretly like, "I wanted to do that!" Especially because I love fighting with Vlad, who also played the White Walker I fought at Hardhome. I've never seen a better swordsman. But it was a really great twist, and it tied up Maisie's journey in a really beautiful way. Over the seasons, we've seen her build up these skills to become this hardened assassin, and she uses it all to kill our main antagonist."

Oh, and one more thing: Harington stressed that Arya needed no encouragement from Jon to do the deed, despite fan theories to the contrary. "What, the big man goes and tells the little girl to go and [do it]? No thanks. That's crap. She did it all on her own. It had nothing to do with Jon," he said.

In the interview, Harington revisited the moment he found out about Jon and Daenerys' fate at a Belfast table read, after electing not to read the script in advance. "I remember my mouth dropping open and looking across Emilia at the table, who was slowly nodding as I went, 'No, no, no!' It was a 'holy f**k' moment, pardon my language. Jaw dropping," he said. "I was completely surprised by it, even though you can kind of see the path through the season of how it was getting there — and even the previous couple of seasons before that, once you can look back. But it was still a big shock to me."

Filming the scene was — unsurprisingly — emotionally challenging, he said. "We shot the hell out of it. It was essentially a page and a half of dialogue, and we spent three weeks filming it. They wanted to shoot every conceivable angle, every way, to make sure they got it the way they wanted it," Harington explained. "With a highly emotionally charged scene like that, it's quite a lot, for everyone — the crew, me and Emilia. It was tiring. It's one of the hardest things we filmed."

Though Jon's consignment to the Wall might have seemed like a dismal fate for the once King of the North, Harington saw it in a more uplifting light. "I loved it. When I read it, that bit really made me cry," he said. "Seeing [Jon] go beyond the Wall back to something true, something honest, something pure with these people he was always told he belongs with — the Free Folk — it felt to me like he was finally free. Instead of being chained and sent to the Wall, it felt like he was set free."

"It was a really sweet ending," he added. "As much as he had done a horrible thing [in killing Daenerys], as much as he had felt that pain, the actual ending for him was finally being released."

Before things get too emotional, let's end with a lighthearted tidbit: the unglamorous reality of the dragon-riding scenes. Turns out, the rig Harington had to mount (or "buck," as he called it) to simulate riding a dragon was more than a little uncomfortable. "Emilia [Clarke] had been moaning about it for seasons, and I was like, 'Yeah, yeah, yeah. Whatever. You have not been through the mud in Northern Ireland. A buck in a nice warm room? Boo hoo,'" he said.

The buck quickly humbled him. "It was horrific. It's not acting at all. It is not acting, it never will be acting, and it is not what I'd signed up for. (Laughs.) But it looked great, right? It just felt horrible! It is very uncomfortable as a man," he said. "I don't think I can have children now."