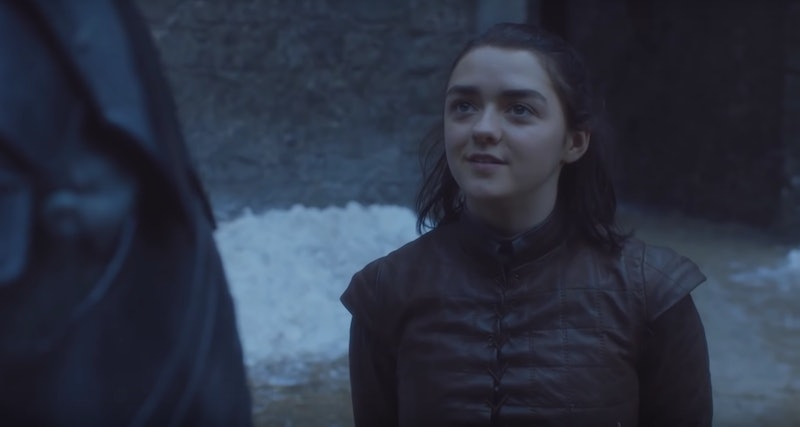 Arya Stark has had one of the biggest transformations of all Game of Thrones characters since she was introduced in Season 1. Over the past seven seasons, she's transformed herself from a young lady into to a killing machine. She trained for seasons to avenge her family, and even keeps a list of names of those who've crossed her. Technically her first deliberate kill happened in Season 3, but ever since she left the Faceless Men, she's been executing enemies left and right. So it's bit interesting that Arya's first big Game Of Thrones battle hasn't actually happened yet. Well, all that will change in Season 8 — the show's final season — in which Arya will face her first major battle for Westeros. And it's a good thing she's joining the fight, because it's also reportedly going to be the largest battle TV has ever seen.

On March 4, Entertainment Weekly shared its special first look at the final season of Game of Thrones, in addition to their collector issue, which includes 16 different covers with the main cast. The cover story revealed many, many details on the final season (no spoilers, thank goodness), specifically teasing the final battle for Westeros. “I skip the battle every year, which is bizarre since Arya’s the one who’s been training the most,” Maisie Williams told EW from the set of her first major battle. “This is my first taste of it. And I’ve been thrown in at the deep end.”

This major battle, which is against the Night King and his army of White Walkers and wights, will also reportedly include Daenerys (Emilia Clarke), Jon Snow (Kit Harington), Tyrion Lannister (Peter Dinklage), Sansa (Sophie Turner), and Brienne of Tarth (Gwendoline Christie). Not mentioned in the article are Ser Jorah (Iain Glen), Bronn (Jerome Flynn), and Daenerys' two remaining dragons, though those last two wouldn't be on set anyways.

Miguel Sapochnik, the director of this episode — as well as "Battle of The Bastards," the infamous Season 6 battle — reportedly told Williams to begin training a whole year before filming the battle for this last season. Williams heard him, but also admitted that she wasn't fully prepared when the time to shoot the epic fighting sequence came. She explained:

“And I said, ‘Yeah, yeah, yeah' ... But nothing can prepare you for how physically draining it is. It’s night after night, and again and again, and it just doesn’t stop. You can’t get sick, and you have to look out for yourself because there’s so much to do that nobody else can do… there are moments you’re just broken as a human and just want to cry.”

But the actor also noted that "the hard work pays off on this show.” She added, “After one of those really tough days, you know it’s going to be part of something so iconic and it will look amazing.”

And iconic, it will be. According to EW, this particular sequence will be one of the biggest feats in cinematic history, yet alone television history. The article described it as "expected to be the longest consecutive battle sequence ever committed to film." The episode will also make Game of Thrones history, as it "brings the largest number of GoT major characters together since the show’s debut episode in 2011," according to EW. It demanded 11 weeks of intense night shoots, in a cold and muddy countryside.

But as Williams said, all the hard work will pay off when it makes television history. And no doubt Arya fans will be thrilled just to have the chance to finally see the younger Stark sibling take her place as one of the fiercest warriors in all of Westeros.

More like this
Nicola Coughlan Shared A Lady Whistledown Excerpt From ‘Bridgerton’ Season 3
By Grace Wehniainen, Alyssa Lapid and Sam Ramsden
Alicent's Green Dress In 'House Of The Dragon' May Be An Act Of War
By Kadin Burnett
The 'Bachelor In Paradise' Schedule Shifts To 4 Hours Every Week After The Season 8 Premiere
By Brad Witter
A New 'And Just Like That' Table Read Pic Confirms A Key Character's Return
By Jack Irvin and Grace Wehniainen
Get Even More From Bustle — Sign Up For The Newsletter