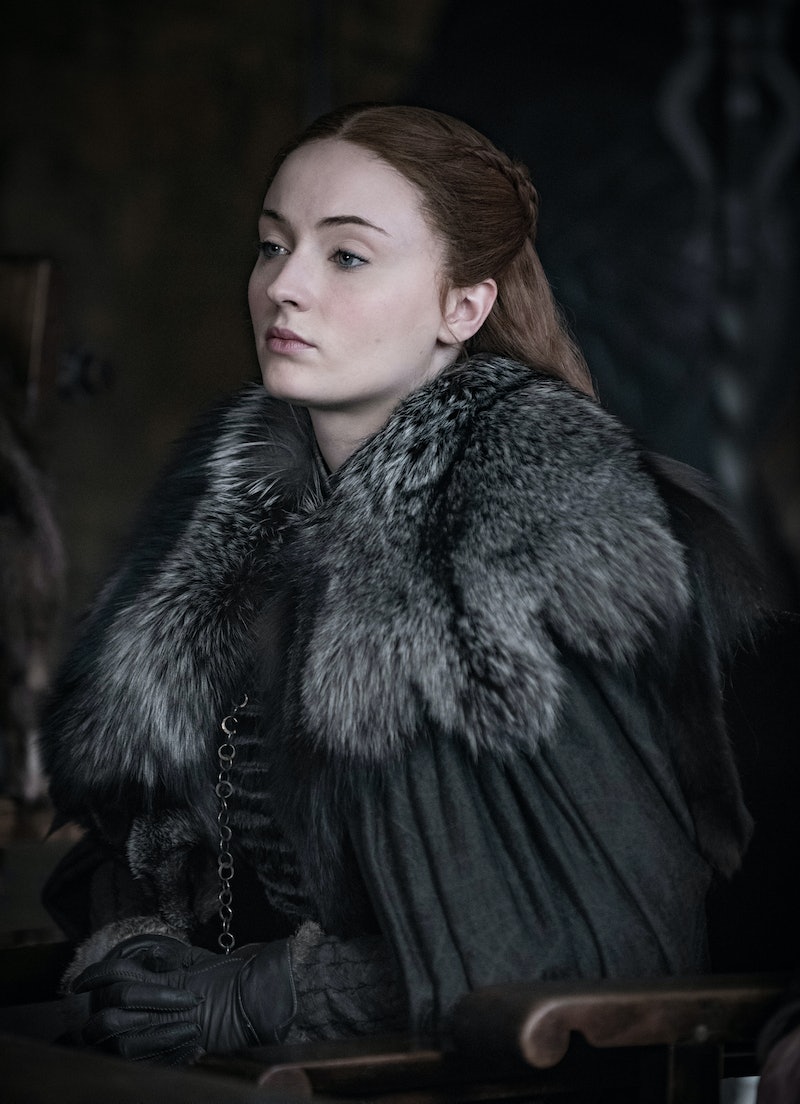 Sansa Stark, like many characters on Game of Thrones, has had a rough time through the past seven seasons. She's lost both parents, been betrothed to a monster, forced to marry another monster, and has been betrayed by those closest to her. Through all of that, she's grown into a fearless leader with a shrewd political mind, and it sounds like she might be growing even more in the show's final season. According to Sophie Turner herself, Sansa is getting armor in Game of Thrones Season 8, and that could mean that she's going to be a key player in whatever final battles have yet to come.

Speaking to Entertainment Weekly recently, Turner revealed the news, although she didn't elaborate too much on what it could mean. “This is the first time I’ve had armor,” said the actor. Although there aren't any official photos of the outfit yet, EW described it as a "jet-black ensemble made of thick leather or similar material."

While Sansa has never fought in battle, or even really yielded a weapon, on GoT before, it does make sense for her to be armored up at this point. “We [sic] the idea of it being very protective and she buttons herself up,” Turner elaborated. “I wanted her to have a bit of armor and be a bit more warrior like. She’s like the warrior of Winterfell.”

The last time fans saw Sansa in Season 7, she was a key leader of the North. In fact, she was basically in charge of the territory and its people while Jon Snow was trying to get support for the inevitable battle against the White Walkers and their wights. With the war looming on the horizon, not to mention the Stark family track record of betrayal, war, and violence that the show has, it's no wonder Sansa finally wants some armor to protect herself.

In an interview with 1883 Magazine, Turner said, "This season is bloodier than ever. It’s full of betrayal, full of war, full of danger. That’s all I can say without giving too much away." Again, this makes sense, because not only do they have the massive army of White Walkers coming south towards Winterfell, they also have Cersei to contend with.

Though Turner has kept details of Season 8 to herself, she did tease that Sansa has not only grown up physically, but has also evolved into a leader fit to fight. "She [Sansa] is so empowered. She has a family behind her," the actor told Digital Spy in July of 2018. "She has Littlefinger, Cersei, Margaery, everyone's wisdom and teachings all behind her." She went on, saying that those lessons she's learned along the way have now made Sansa into "a real, true leader of Winterfell." It's this new Sansa that fans will get to see in Season 8, the actor revealed, adding:

"And that's where we first see her — as a very protective, empowered lady in charge. It's the first time you ever see her like that, and it's so amazing to see her like that — kind of owning her destiny."

Sansa's lack of fighting skills might have made her less of a frontrunner to sit on the Iron Throne when all is said and done. But, if her new armor is, in fact, an indication that she's ready to battle, then she might just have a chance.