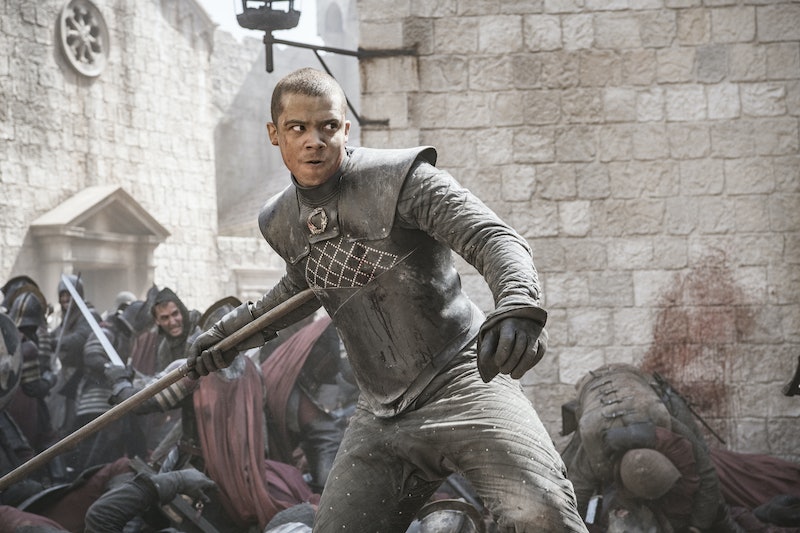 To say that the Game of Thrones series finale was met with extreme controversy would be an understatement, however, fans aren't the only ones who took issue with a few of the show's final plot points. In fact, Game of Thrones star Jacob Anderson said Jon Snow got off too easy. The actor who played Grey Worm on the series admitted during a recent interview with Metro that he found Jon Snow's fate to be completely unfair, given everything the character had done by the time the end credits rolled — most notably, murdering Queen Daenerys.

For his crimes, Jon was allowed to live out the rest of his life as a member of the Night's Watch and live among the free folk — a decision that Anderson whole-heartedly does not agree with. “Personally I feel like he got off a bit lightly,” Anderson told the outlet, when asked about Jon Snow's punishment for killing Dany — or lack thereof. The actor also thought it would've been interesting to see the fan reaction if the former Lord Commander had received the ultimate punishment: death. “Can you imagine?" he continued. "People would be very upset if Jon Snow was beheaded. People love that guy.” And yet that's precisely the fate Anderson feels that the character should've been given. Had it been up to Grey Worm, the answer for Anderson is simple: “I’d take his head off!”

There was never much love lost between Grey Worm and Jon Snow. In fact, Grey Worm seemed to always have an eye on Jon whenever he could, almost as if he suspected the King in the North would betray his queen. So then why did he ultimately agree to let Jon walk away from his crime as basically a free man? "I feel like from Grey Worm’s perspective, it’s just there had been enough violence by that point," Anderson explained. "Grey Worm was all about peace at that point, he was like, “right I just wanna go and chill on an island and fulfill my promise to Missandei.”

That promise involved him traveling to the island of Naath where Missandei was born and raised. The two of them had planned on going there together to help protect the people. And even though Missandei ended up dying by Cersei's hand, Grey Worm still wanted to carry out that plan in her memory. “I think it’s probably a peaceful place, I imagine there’s not a lot of beef going on there at the moment,’ Anderson added, regarding his character's journey to Naath. “I think maybe he’s actually had a chance to relax for once in his life. That’s how I like to think of it anyway. That’s what I want for him. Just being able to have some sleep.”

As nice as that sounds, though, Anderson had predicted a vastly different outcome for his character just a few months ago. In an interview with Insider, Anderson seemed to confirm that Grey Worm and the Unsullied Army die "a horrible death by butterflies" in Naath, since the insects are known carriers of a deadly disease in the books, which only natives are immune to.

So what actually happens to Grey Worm then? Anderson's latest comments make the answer a little less clear, but if Jon Snow is able to get a happy ending, then it's only seems fair for Grey Worm to be given a similar treatment.