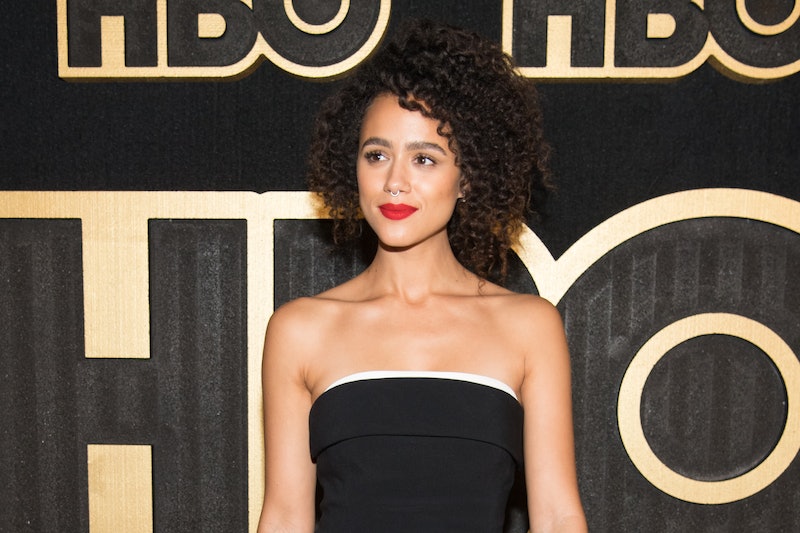 Almost 1.7 million people have now signed a certain petition objecting to a certain ending of a certain colossal TV show — and Game of Thrones star Nathalie Emmanuel, like many of her castmates, isn't too thrilled about it. Speaking to TVLine, Emmanuel, who played Missandei of Naath, said, "Listen, I think it’s totally fine if you don’t like something. That’s perfectly acceptable. What I didn’t like was that people were signing a petition," adding, "You can’t ask for receipts on art. You just can’t. The art has been created for you, and you can either choose to like it or not."

Emmanuel, whose starring role in Mindy Kaling's remake of Four Weddings and a Funeral will hit Hulu next week, also discussed Missandei's brutal, devastating death and the acting process behind it. "I was very grateful for the strength that she had when she left. That was a performance choice for me," she said. "I was like, 'She’s not going to be crying. She’s not going to be stereotypically scared. She’s scared, but she owns it.'"

"This woman survived slavery. She knew that she might go to war and die. And she’s owning it like a badass bitch," Emmanuel continued. "And I felt like that’s what I did. I was very proud of it."

Emmanuel is far from the only Game of Thrones star to criticise the petition to remake the final season. Back in May, one Sansa Stark/Queen of the North/Sophie Turner told the New York Times, "Honestly, I’m not surprised. People always have an idea in their heads of how they want a show to finish, and so when it doesn’t go to their liking, they start to speak up about it and rebel."

She added, "All of these petitions and things like that — I think it’s disrespectful to the crew, and the writers, and the filmmakers who have worked tirelessly over 10 years, and for 11 months shooting the last season. Like 50-something night shoots. So many people worked so, so hard on it, and for people to just rubbish it because it’s not what they want to see is just disrespectful."

Kit Harington, otherwise known as Jon Snow, didn't address the petition directly, but he didn't have an awful lot of time for critics, telling Esquire, "How I feel about the show right now is quite defiant. I think no matter what anyone thinks about this season — and I don’t mean to sound mean about critics here — but whatever critic spends half an hour writing about this season and makes their [negative] judgement on it, in my head they can go f**k themselves."

"Now if people feel let down by it, I don’t give a f**k — because everyone tried their hardest. That’s how I feel. In the end, no one’s bigger fans of the show than we are, and we’re kind of doing it for ourselves. That’s all we could do, really. And I was just happy we got to the end," he said.

Isaac Hempstead Wright, who played Bran Stark, told the Hollywood Reporter that the petition was "just absurd," continuing, "It's ridiculous that people think they can just demand a different ending because they don't like it." And Nikolaj Coster-Waldau, the actor behind Jaime Lannister, poked fun of the petition at Comic Con, as Deadline reports. "Of course HBO are going to change the whole thing," he said. "That's the power of the internet." He added, "When it comes to the end it’s going to piss you off no matter how it ends, cause it’s the end," urging fans, "Just don't call people names."

Earlier this week, HBO president Casey Bloys finally commented on the fan backlash and the resulting petition, according to TVLine. "There are very, very few downsides to having a hugely popular show," Bloys said at the Television Critics Association summer press tour, "but one I can think of is when you try to end it, many people have big opinions on how these characters’ stories should come to an end." Unsurprisingly, he said reshooting the final season was "not something we seriously considered." Perhaps it's time for disgruntled viewers to turn to fanfic?