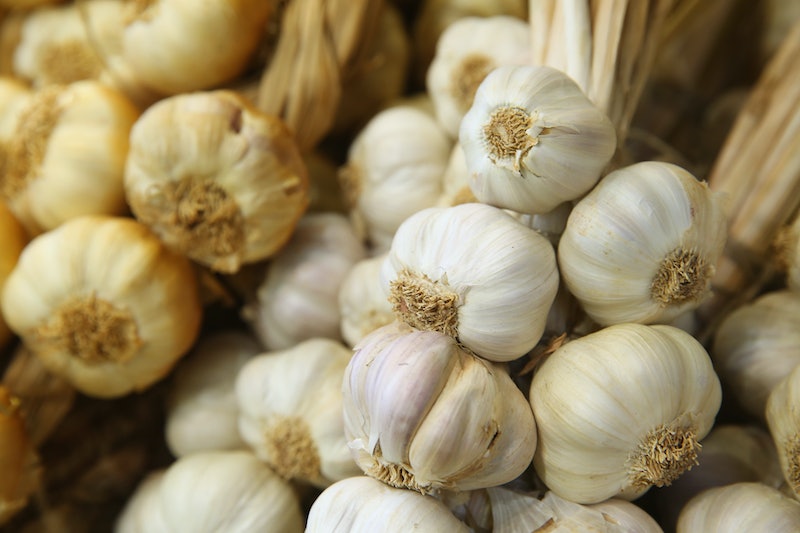 There are tons of different natural remedies for treating yeast infections out there, and some are more eyebrow-raising than others. On April 23, a gynecologist tweeted an ever-helpful reminder that you should not put garlic in your vagina to treat a yeast infection, according to Yahoo Style. Yes, this is a thing some people are doing to try to treat their yeast infections homeopathically, but it is not doctor-recommended. Although there is some science behind why people are doing this, says Yahoo Style, it doesn’t add up to an effective yeast infection treatment, and could actually do more harm than good.

Dr. Jennifer Gunter, gynecologist and author of forthcoming book The Vagina Bible, tweeted a now-viral thread explaining why inserting a garlic clove into your vagina isn’t an effective treatment for a yeast infection. She tells Bustle she was inspired to tweet about this issue because the myth is so pervasive.

"This is how myths never die. [...] I’ve written about how garlic should not go in the vagina on my blog and for The New York Times in my column The Cycle, so I thought maybe I would tackle it on Twitter."

Her thread has all the data you need to reconsider this so-called treatment. “Garlic contains allicin, in the lab it may have antifungal (i.e. anti-yeast) properties. This is in a lab, not even in mice. Just a dish of cells. Your vagina is not a dish of cells,” Dr. Gunter said in one of her tweets. “[…] For allicin to be released, the garlic has to be cut or crushed. Garlic could have bacteria from the soil. Bacteria from the soil can be pathogenic — bad for the body. That's why we clean wounds. If you actually happen to have an inflamed yeasty vagina, that soil bacteria would be more likely to infect [it].”

Basically, Dr. Gunter is saying you’d have to crush up the garlic to release the allicin in it, but since the garlic isn’t sterile, it could cause an infection on top of the symptoms you’re already experiencing. And then you’d also have all this crushed up garlic in your vagina that you or your gyno would have to figure out how to flush out. Not really a recipe for a great home remedy.

Paul Nyirjesy, an obstetrician–gynecologist and director of the Drexel Vaginitis Center at Drexel University College of Medicine, told Scientific American that garlic does contain allicin, which is considered fungicidal in the lab, like Dr. Gunter said. “But you don't know how much garlic you need or how effective it is,” Dr. Nyirjesy told Scientific American. “If you put a clove of garlic in your vagina, does it really treat what's going on in the vagina, or is it just sitting there with all the active ingredients sitting in a clove of garlic?”

So why do so many people think garlic will help treat their yeast infections? Dr. Lauren Streicher, an obstetrician–gynecologist based in Chicago and author of Sex Rx: Hormones, Health, and Your Best Sex Ever, told Health that many people get frustrated when over-the-counter antifungal creams don’t relieve their symptoms, so they turn to home remedies. But many people think they have a yeast infection when they actually have bacterial vaginosis because the symptoms are so similar, Dr. Streicher told Health. A yeast infection causes a “thick, white, clumpy” discharge that usually doesn’t have a smell, according to Planned Parenthood, while bacterial vaginosis causes a thin discharge that has a strong fishy smell.

"If you self-treat for yeast on average you will be treating incorrectly 50-70% of the time," Dr. Gunter tells Bustle. "Doctors and other medical professionals are also not good at diagnosing yeast unless they follow specific protocols. It is such a complex issue!"

That means if you’re experiencing any below-the-belt symptoms that just won’t go away, the best thing to do is just talk to your doctor. Your symptoms might not be caused by what you think, so your doctor can help you figure out the best course of treatment.

Update: This piece was modified from its original version on April 24, 2019, to include comment from Dr. Gunter.