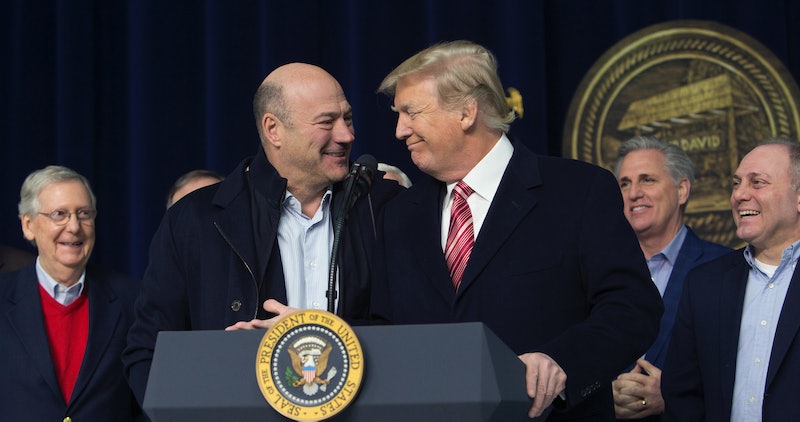 The White House announced Tuesday that President Trump's chief economic adviser Gary Cohn will resign. Cohn is the most recent of many top officials who have resigned from the White House in recent weeks.

“Gary has been my chief economic adviser and did a superb job in driving our agenda, helping to deliver historic tax cuts and reforms and unleashing the American economy once again,” Trump said in a statement to the Times. “He is a rare talent, and I thank him for his dedicated service to the American people.”

The White House told the Times that there was no single reason for Cohn's departure. But as a Democrat who strongly supports free trade, he had always been an odd duck in the Trump White House, and has reportedly clashed with the president multiple times over trade policy since joining the administration in January.

Most recently, Cohn and Trump reportedly butted heads over the president's decision to impose tariffs on steel and aluminum imports. According to Bloomberg, Cohn worked furiously behind the scenes to change Trump's mind on the tariffs, going so far as to convene a summit of metal industry executives at the White House on Monday. Trump believed that Cohn would resign over the dispute, Bloomberg also reported.

Cohn, who is Jewish, reportedly came close to leaving the White House after the deadly a neo-Nazi rally in Charlottesville, Virginia in August. That event featured Hitler salutes and chants of "Jews will not replace us," and it ended with the death of one counter-protester and the vicious beating of another. When Trump responded by insisting that there were "very fine people on both sides" of the protest, Cohn drafted a resignation letter, according to the Times. However, he ultimately decided to stay with the administration.

The Times also reported that before his resignation, Cohn had been in talks to replace Gen. John Kelly as Trump's chief of staff. Kelly has become the source of controversy and negative press in the administration as of late, and according to the Times, Trump had conversations with Cohn about the prospect of him replacing Kelly, who as of this writing is still the chief of staff. Kelly himself said that he will "miss having [Cohn] as a partner in the White House, but he departs having made a real impact in the lives of the American people."

In a statement, Cohn expressed gratitude to Trump and spoke fondly of his role in crafting the tax cuts package that Trump signed into law in December.

"It has been an honor to serve my country and enact pro-growth economic policies to benefit the American people, in particular the passage of historic tax reform," Cohn said. "I am grateful to the President for giving me this opportunity and wish him and the Administration great success in the future.”

Shortly before Cohn announced his resignation, Trump told reporters that "many, many people want every single job [in the White House]," and that he likes having staff members who express opposing points of view on policy.

The White House hasn't announced who will replace Cohn, either in his capacity as Director of the National Economic Council or as Trump's chief economic adviser. CNBC journalist Eamon Javers reported that the top two candidates in contention are Peter Navarro, director of the White House Office of Trade and Manufacturing Policy, and Larry Kudlow, a conservative political commentator. Navarro is a strong supporter of Trump's tariffs and general worldview on trade, but Kudlow, like Cohn and many elected Republicans, is not. Kudlow told CNBC on Thursday that American trade policy could take "a turn for the worse" in light of Cohn's departure.

"I wouldn't necessarily say the cause for freer trade is over," Kudlow said on CNBC Turesday. "But we'll see who is appointed. I personally regret this very much."