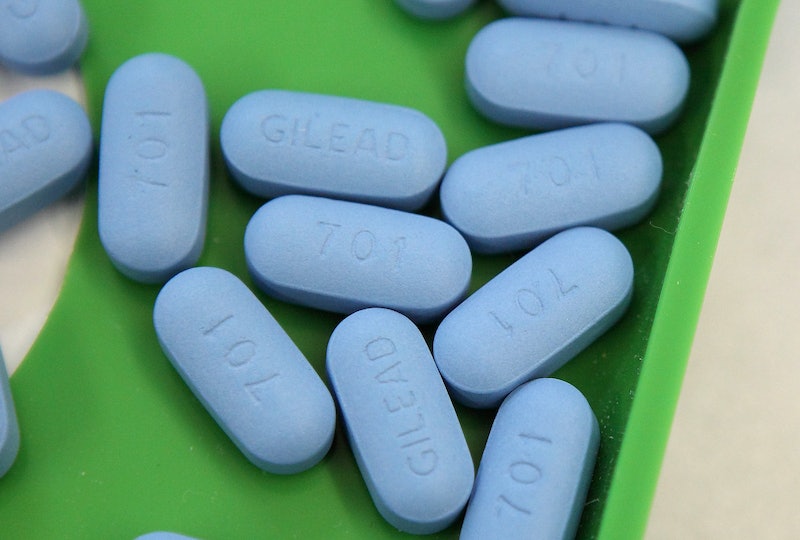 On May 15, the FDA announced that gay and bisexual teens can now take PrEP to help prevent HIV infection along with other preventative measures, the Advocate reported. The FDA approved PrEP — aka, pre-exposure prophylaxis — for adults in 2012. An initial trial revealed that Truvada (the drug for PrEP) reduced the risk of HIV infection by 42 percent when compared to a placebo among HIV-negative trans women, gay men, and bisexual men engaging in unprotected sex with men. Another preliminary trial also found PrEP reduced the risk of HIV infection by 75 percent for heterosexual couples, where one partner was HIV-negative, and the other was HIV-positive. The medication, which is taken daily, became the first ever drug to be approved as a preventative measure for people who are HIV-negative, but who are part of communities that experience disproportionate rates of HIV infections. Truvada wasn’t intended to replace safe-sex practices, like condoms, but instead, to be used as an additional preventative method.

Following the approval of PrEP for adult, a study was launched to test the efficacy and safety of Truvada use for adolescents between the ages of 15 and 17, who were also part of populations at higher risk of contracting the HIV infection. As the Advocate reported, the CDC estimates that youth between the ages of 13 and 24 accounted for 21 percent of all new HIV infections in the U.S. Furthermore, 81 percent of those new diagnoses were young gay and bi men — in particular, Black and Latinx teens were disproportionately affected. This announcement is incredibly important because it provides at-risk teenagers a protocol for practicing safer sex.

Dr. Sybil Hosek, a Clinical Psychologist at Stroger Hospital in Chicago, and the lead investigator of the study, said in the May 15 press release, “Study ATN113 has demonstrated that Truvada for PrEP is a well-tolerated prevention option for adolescents who are vulnerable to HIV. In addition to traditional risk-reduction strategies, healthcare providers and community advocates are now equipped with another tool to help address the incidence of HIV in younger at-risk populations.”

The study determined Truvada was safe for HIV-negative gay and bi teens to use, with the main side effects being similar to those observed in adults: headaches, weight loss, and abdominal pain. Four adolescents out of the 67 study participants also experienced a slight decrease in bone mineral density (BMD), but not enough to cause concern.

“We must make use of all available options when considering HIV prevention strategies, and we welcome the development that Truvada for PrEP is now available for younger people who are at risk of HIV,” Matthew Rose, the Policy and Advocacy Manager at the National Minority AIDS Council (NMAC), said in the press release. “We will continue to build awareness and understanding of the role of Truvada for PrEP as part of a comprehensive HIV prevention plan for all who may benefit from it, particularly among communities disproportionately impacted by the disease, including young Black and Latino [sic] men in the United States.”

When taken as prescribed, seven days a week, Truvada for PrEP was shown in studies to be 99 percent effective in protecting HIV-negative people from contracting the infection. Even for people who just two pills per week, PrEP was still found to be 76 percent effective in protecting against the HIV infection. So, while it may not cure for HIV, it is still an immensely valuable medication — especially for gay and bi teenagers. The approval of Truvada for adolescents is a huge stride forward in HIV prevention, HIV awareness, and for the younger members of the LGBTQ community.