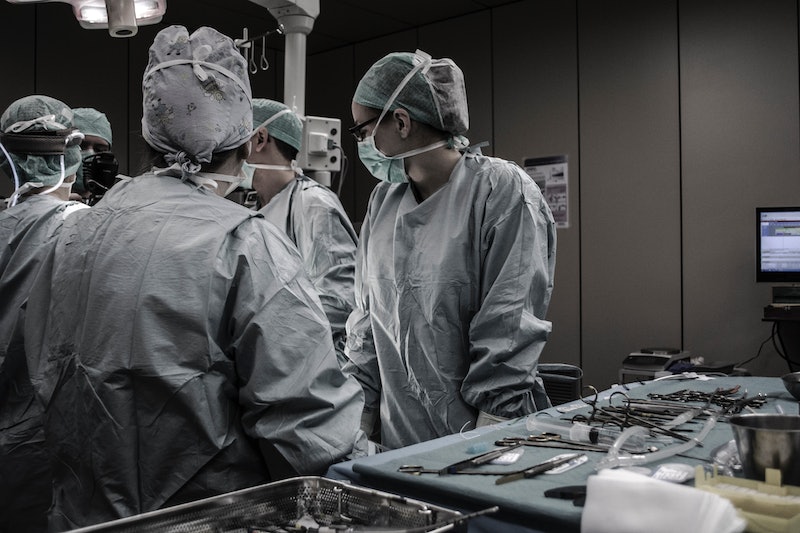 Women who enter STEM careers often face gender bias from science faculty, and from male co-workers who don’t even believe gender discrimination is an issue in their workplace. Though a 2016 study suggests female doctors outperform their male counterparts, they annually earn roughly $91,00 dollars less than men in their same field. In spite of these alarming issues, there has been an uptick in young women joining STEM careers, as well as increased advocacy for women who choose a career in science. But increasing the amount of women who enter STEM careers is not only a stride for women’s equality — it could actually have a direct impact on the quality of your medical care. According to a study released in the Nature Human Behavior journal on Nov. 6, gender bias in medical research is less likely if there’s a woman on the team.

Researchers pored over 1.5 million papers released between 2008 to 2015, and found that when a study has at least one female author, there is greater attention paid to discrepancies between women and men’s health — which, in turn, propels scientific and medical advancements that positively affect women's health outcomes. Specifically, the research revealed gender analysis was included in 45 percent of the studies that had at least one female author, compared to only 35 percent of studies that has all-male research teams. Furthermore, 53 percent studies that had women as their main author (aka, the scientist who does majority of the work) included gender analysis, while only 40 percent of male-led papers included a gender analysis. Though the scientists said they may have missed research papers that included gender analysis due to the language algorithm they used, the percentages for women’s health-inclusive research is dismally low.

You may not think this study is a big deal, but these gaps in gender analysis can ultimately determine the quality (or lack of quality) of your medical care. Women are commonly treated the same as men by doctors and researchers, despite biological differences that can impact health. One often-cited example is that of heart attacks, which present very differently in men than women, even though people are typically told to look out for the "male" symptoms. “Clinical trials mainly involved males and the results became the evidence base for the diagnosis and treatment of both genders. Medication dosages were typically adjusted for patient size and women were simply ‘small men,’ writes Professor Deb Colville in The Conversation. “Gendered medicine is not only about women. It is about identifying differences in clinical care and ensuring the best health care is provided for all.” Simply put, the lack of gender analysis in medical research may indicate doctors cannot properly treat their female or male patients. The lack of consideration and care for women’s health, historically called “bikini medicine” by some physicians, has led to women being taken less seriously when they report symptoms, or being completely ignored by male doctors.

Overlooking or flat-out halting the progress of women’s healthcare is commonplace throughout United States’ history, as people have stood in the way of women trying to advance medical science. The first Planned Parenthood — the first real clinic dedicated to women’s health — was opened in 1916, in Brooklyn, New York. In 1977, the FDA excluded women of “childbearing age” from participating in clinical trials — ensuring that women would not be represented in the health outcomes from those studies. Even with small strides made towards medical equality between 1916 and the 1970s, the first U.S. women’s health organization, the Older Women’s League, was not founded until 1978. The Native American Women’s Health Education and Resource Center wasn't even opened until 1995. But it wasn’t until 2008 that the World Health Organization issued guidelines on “teaching gender competence,” which basically worked to ensure doctors and scientists took gender differences in medicine and health seriously. This study furthers that finding by showing how including women in medicine can decrease gender bias in medical research — which can, in turn, create safer and more equitable health outcomes for all.

More like this
How To Fight For Reproductive Rights, Based On How Much Time You Have
By Courtney Young
34 Quotes That'll Inspire You On Juneteenth & Beyond
By Syeda Khaula Saad and Siena Gagliano
Plan C Vs. Plan B: What's The Difference?
By Lexi Inks
6 Abortion Advocates To Follow On TikTok
By Sara Youngblood Gregory
Get Even More From Bustle — Sign Up For The Newsletter