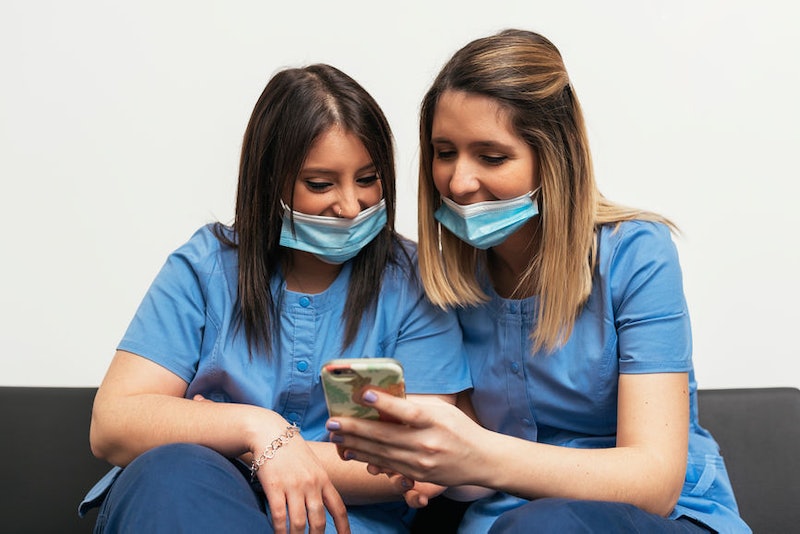 Many of us fully appreciate the fact that the UK has a free healthcare system, but many of us are also more than aware that the current state of the NHS is far from ideal. Whether it's waiting weeks to get a doctor's appointment or spending hours in A&E only to be sent home with no useful information, it's clear that a major upgrade needs to happen. And, according to new research, Generation Z's ideal NHS involves a technological revolution.

Biotech company Roche Products Ltd polled over 5,000 British adults. More than 1,000 of these participants were aged between 16 and 24 and therefore classed as young people, or members of Generation Z if that's your preference. The results of the survey showed that 82 percent of young people would like the NHS to embrace "digital solutions to better manage and improve their healthcare." This doesn't mean giving more tasks to the already overworked staff, but taking some of their responsibilities away.

In fact, almost two thirds of the young people polled said they would be comfortable with a chatbot diagnosing them, instead of a real life human. (Unsurprisingly, only 38 percent of those over 55 said the same.) Over half of Generation Z went so far as to say that they would rather be advised by a professional via an app or website, rather than through a face-to-face consultation.

Now, I know what the older generations will say. They'll say that this is only because younger people's reliance on technology means they are no longer comfortable having IRL interactions. For some people, that may be true. But the likelier issue at hand is that so-called "snowflakes" may have a lot less time to physically see a doctor.

Low pay means some young people are forced to work two or three jobs just to earn a living and the increasingly pressurised world of work means that taking time off just isn't an option. This is especially true when your appointment is delayed by over an hour, as often happens in my local surgery. The majority of employers aren't likely to look kindly on someone taking half a day off every time they need to visit their GP.

Young women in particular may also be put off real-life visits because they're worried about not being taken seriously. As reported by the BBC, several studies have shown that women are less likely to be believed in hospitals, resulting in longer waiting times and ineffective treatment. I have personal experience of this. When suffering from regular migraines, I had to see doctors numerous times before any kind of prescription was handed to me.

Technology could potentially solve the gender bias problem and let diagnoses be based on symptoms rather than preconceptions. It could also be used for more accurate diagnoses and personalised treatment. Roche Products Ltd said that 82 percent of young respondents would be comfortable with the NHS genetically profiling any tumours and that 73 percent would be happy to share their genetic data for various purposes. Of course, there are valid concerns over personal data being used for any kind of reason, but young people seem less bothered by this.

“Generation Z will drag the NHS into a digital era whether it’s ready or not, so it should get used to the idea, and brace itself for a period of technological disruption, driven by patients," Rachel Power, chief executive officer at The Patients Association said in a statement. "This will be demanding, when it is still trying to adjust to a change of demographics involving people living longer but not healthier, with multiple long term conditions.

"That shift was foreseeable long in advance, and the NHS — and particularly the political leaders of the day — failed to lay the groundwork to transform the NHS in good time. We must do better with the next big foreseeable challenge.”

Seeing as 34 percent of Generation Z think the NHS isn't prepared to meet future needs, that challenge is definitely a real one.