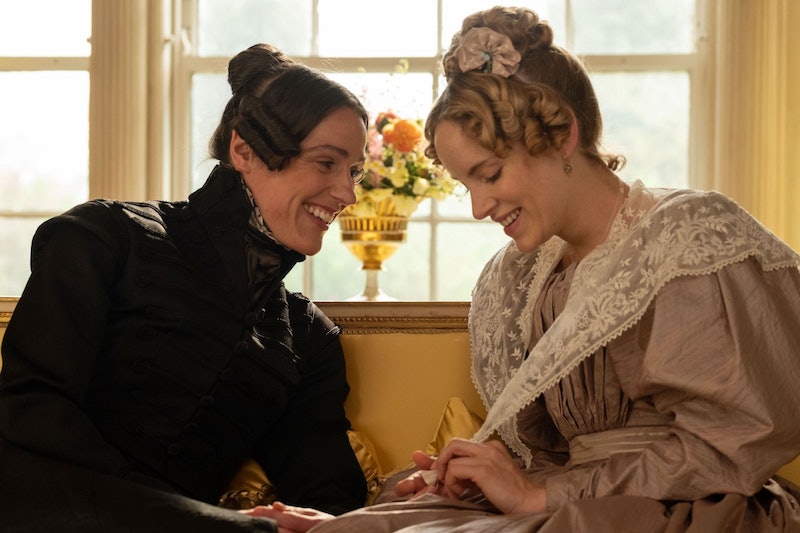 From Wild Nights with Emily's Emily Dickinson to The Favourite's Queen Anne to the eponymous star of Colette, historical queer women are having a moment on screen. While their same-sex relationships have often been ignored or minimized in the past, these aspects of their lives are finally being celebrated by auteurs who understand not only the importance of this representation but the richness of their stories. HBO's miniseries Gentleman Jack is another strong addition to this group, but though its timing seems fortuitous, Sally Wainwright's project has been in the works since the late '90s. Until now, the world apparently wasn't quite ready for a story about Anne Lister, a woman who is frequently referred to as "the first modern lesbian."

As a woman who defied conventions of gender and sexuality in 1800s England, Lister was simultaneously fascinating and somewhat third rail. Though she was a prominent and well-off landowner during her lifetime, Lister's queer identity and female masculinity was difficult for the public to properly memorialize. Her massive diaries detailed, among many other facets of life at her Shibden Hall home, her relationships with women like Ann Walker, whom she eventually married in what is considered Britain's first lesbian wedding. Family members hid the diaries both to preserve them and to keep them safe from others who thought they should be destroyed. Wainwright, who grew up in West Yorkshire, made it a mission to restore and digitize Lister's handwritten entries, and also to turn her story into something engaging for the screen for as broad an audience as possible.

"The first time I pitched it was around 2002, 2003, and the time just wasn't right," Wainwright tells Bustle. "And if I had managed to get it greenlit, I think it would have been in quite a niche slot on BBC2 rather than on a primetime slot with HBO or BBC One. So I think it's just in the air — it's just the timing is right now." After all, she adds, we're all speaking "a lot more articulately about gender and sexuality" now than we were more than a decade ago.

Gentleman Jack focuses on Lister's return to Shibden Hall after studying (and romancing women) in other parts of Europe. A confident woman with a gait as strong as her will, Lister (Suranne Jones) becomes master of the estate while caring for her elderly uncle and ill aunt. When she's not collecting rent from her many tenants (a job, many remind her, which should be done by a man) or haggling with a shifty businessman stealing and selling coal mined on her land, Lister is spending time with her new neighbor, Ann Walker (Sophie Rundle). Walker is clearly enamored with Lister, who notices her interest and begins to court Miss Walker as best she can within a world that prizes patriarchal notions of women as wives to respectable men and mothers to many children. But as secret as Lister had to be about her Sapphic proclivities, she was never ashamed of them — she just had to be more careful and calculated about how much of herself she allowed to be commented on (and therefore controlled by) those around her.

"Anne Lister was very open about who she was," Wainwright says, noting the stories in Gentleman Jack were taken directly from Lister's diaries. "She never broadcasted it — she never showed off that she was gay, but she certainly never hid it, either." Because Lister was so unashamed of her sexuality, Wainwright wanted to be sure that Gentleman Jack's depiction of it would be, too.

"With something like The Favourite, it's very covert — there's no discussion about [sexuality] at all; it's very implied. In the scenes where [the women] do have sex, you don't see it. There's almost a pretense that it's not happening," Wainwright says. "There's quite a difference between other dramatizations of queer history and this one."

Gentleman Jack does a great service in keeping shame out of the equation. Unlike other queer films that make self-acceptance and coming out their central tension, Lister loves herself; her family knows who she is and supports her wanting to take a companion. Homophobia exists, but underneath a veil of "decency." Because while those around Lister are aware she is different than other women (she dresses entirely in black and wears a top hat, for one), she is also likable. Her personality is magnetic, and her class has afforded her the opportunity to be educated and well-traveled. She is social with a keen sense of humor, and it's not hard to see how she could bed several women, even in a time where homosexuality was punishable.

"No one ever slept with her that didn't want to sleep with her," Wainwright says, noting that while some erroneously refer to her as a predator, the way she courted women was always consensual. "The women who slept with her did so through choice and almost invariably came back for more. She saw herself as very romantic and gentlemanly in her pursuit of women."

Part of the magic of Gentleman Jack is owed to Jones' portrayal of Lister. An English television and stage actor, Jones says she worked closely with Wainwright to take Lister's physicality and distinct mannerisms directly from her diaries.

"In the diaries, we know that she walks fast and she walks upright. She was mistaken for a man. She had a masculine nature. She talked with a low voice," Jones tells Bustle. "We knew that also stood her out from a crowd. … We know she was fiercely intelligent, so we can play with the physicality of how that comes out in big gestures, with Sally always pushing me to experiment." Jones notes that Lister was high energy, so she played her as such, using props like a pocket watch or pen to pull out and twiddle. "Because she can never be still," Jones says. "And then those times when she is still it speaks volumes so there's a lot of information to go on. We played with her having social — being socially awkward and invading people's space."

Lister's traits were so unconventional for women that she herself believed she was a "masculine oddity," Wainwright says. The word "lesbian" hadn't yet entered the lexicon.

"The only other language was either quite vulgar language like 'Jack,' which is why she's called Gentleman Jack — she was considered to be rather snooty and a dyke so she was called Gentleman Jack," Wainwright says. "So that was quite an aggressive nickname for her and the only other language for it was heightened language like 'wintering in Rome.' Things like that... It was so invisible that there wasn't any language for it."

Outside of the subject matter, what's highly enjoyable about Gentleman Jack is the tone Wainwright strikes for her characters (which include Gemma Whelan as Lister's younger sister, in a much less masculine role than playing Yara Greyjoy on Game of Thrones). Lister frequently breaks the fourth wall to charm the audience via a wink directly at the camera, and uses her charming wit in conversation with others who are much more straight-laced. Moments of intense seriousness (including bits of violence and well-earned tears) are measured by jokes that Lister is not the butt of, but in on.

"I think life is funny," Wainwright says. "I think however dark life is, human beings always find humor within it and I think for me that was very important. I feel that when I read the journals — I think this is an account of a woman's real life, a very intelligent woman with a very serious outlook on the world. But then there's times when you're reading the journal [and] it's hilarious." Keeping that balance of seriousness and silliness was important to Wainwright, and she credits Jones for not only understanding this but inhabiting it as Lister, who's a walking contradiction of sorts, and therefore a compelling protagonist.

Gentleman Jack is a fictionalized retelling based in Lister's truth, as her diaries were not just invaluable but necessary to be able to give proper perspective in a story about a woman defying gender roles and boundaries years before women would even get the explicit right to vote. Wainwright's rescuing of Lister's diaries is a gift in itself, and Gentleman Jack is a delicious bonus.