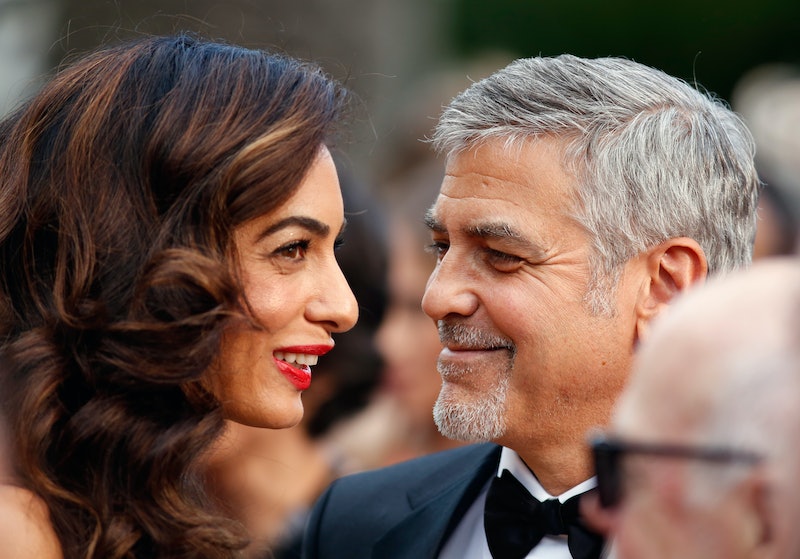 The moment pop culture enthusiasts have been waiting for has finally happened. According to a representative, George and Amal Clooney have had their twins on Tuesday. Their rep confirmed that the Clooneys welcomed twins Ella and Alexander, but you may have noticed something a little extra thrown in there. There's a hilarious line in the Clooneys' birth statement that just seems so tongue-in-cheek that I can't imagine that they didn't approve it. And with that kind of humor, they're basically already one of the best sets of parents out there.

On Tuesday morning, a representative for George and Amal Clooney confirmed to PEOPLE that both babies had been delivered in a hilarious statement. It reads:

“This morning Amal and George welcomed Ella and Alexander Clooney into their lives. Ella, Alexander and Amal are all healthy, happy and doing fine. George is sedated and should recover in a few days.”

Of course, that’s not the first time they’ve joked about becoming parents. George Clooney spoke to Entertainment Tonight in March and jokingly revealed that he considered naming the twins after his very own brand of tequila, Casamigos. "My wife says I can't name them Casa and Amigos. That's the one thing I'm not allowed to do," he said.

Amal confirmed back in February that she and her husband were expecting twins, but the two have remained relatively quiet since then. They stepped out for a casual date night in Paris after attending the 42nd Cesar Awards in that same month. The 39-year-old human rights lawyer visited the United Nations shortly after, in March, to deliver a speech requesting that the Iraqi government begin an investigation into the crimes committed by ISIS.

Meanwhile during an interview with Laurent Weil on Rencontres de Cinéma, George spoke excitedly of the family's announcement saying, “We are really happy and really excited. It’s going to be an adventure.” And it seems like the adventure is already off to a pretty humorous start.