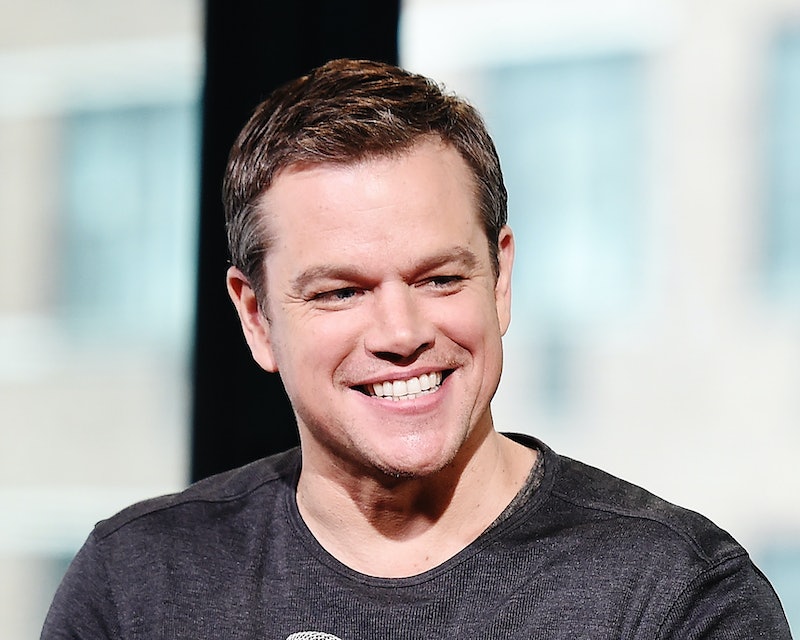 On Thursday, it was announced that George and Amal Clooney are reportedly expecting twins. Nothing has been confirmed just yet, and Bustle has reached out to George's rep for comment, whereas Amal's could not be reached for immediate comment. Though, none of that really seems to matter, because here is all of the confirmation you need. George Clooney told Matt Damon about his twins a long time ago, Damon told Entertainment Tonight Canada Thursday.

"I was working with him last fall and he pulled me aside on set and I mean, I almost started crying," the actor said about his good friend soon becoming a dad. "I was so happy for him. And I was like, 'How far along is she?' And he goes, 'Eight weeks.'" The Martian star freaked out, and not just because he is over the moon for his dear friend, but because George didn't know the "rule" when it comes to revealing someone is pregnant.

Yeah, that's all the confirmation I need that George and Amal will soon be parents. If Damon is going around saying it's true, then that's a pretty solid sign. Why else would he be putting it out there for the world to discuss? I really doubt he'd be making such comments about someone he cares about, if there was no truth to it. That said, I wonder how George feels about Damon being so open about it all, because he and Amal seem to have been trying to keep it private.

Whatever the case, it sure is adorable to see Damon gushing over his good friend's wonderful news. It's seriously the sweetest thing. As he told ET Canada, "So yeah, I’m thrilled for him." He also praised Amal by adding, "She’s amazing. He hit the jackpot. Just on every level. She is a remarkable woman."

Be sure to notice how he said "kids," which is also further confirmation that they're having twins. Thank you, Matt Damon, for being so chatty and confirming your friend's wonderful news so he doesn't have to.