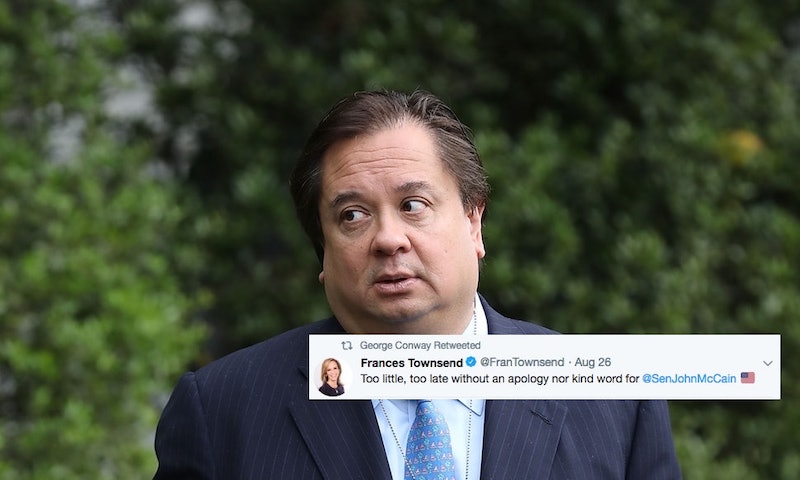 Following the death of a widely respected Republican senator, George Conway called out Trump's John McCain response, retweeting accounts that condemned the president's treatment of the late senator. And his retweets about Trump's actions in the wake of McCain's death fall right in line with his history of denouncing the president via social media.

As The Hill reported, Conway's account features a myriad of retweets from several sources criticizing Trump for seemingly disrespecting McCain, both as the senator battled terminal cancer and following his death. For example, Conway retweeted a tweet from CNN's Jake Tapper, in which Tapper was commenting on the news that Trump reportedly prohibited the release of a White House statement calling McCain a "hero." In his tweet, Tapper wrote:

President Trump nixed issuing a statement that praised the heroism and life of Sen. John McCain, telling senior aides he preferred to issue a tweet before posting one Saturday night that did not include any kind words for the late Arizona Republican.

On Aug. 25, Conway also retweeted Washington Post columnist Max Boot. The author had shared a quote on Twitter from an article he wrote about McCain, tweeting, "As I wrote: 'Trump hated McCain and insulted him at every turn because McCain was everything Trump is not — and everything that we need in our politics today but tragically lack.'"

As Politico reported, Conway did not hold back when it came to sharing his views on Trump's remarks, this time directly commenting on the issue. Conway replied to one of Trump's tweets about the Department of Justice, writing

What everyone should want, and the country needs, is a 'President' capable of comprehending what it means to 'take Care that the Laws be faithfully executed.' Art. II, § 3.

On Aug. 14, Conway also used a metaphor on Twitter to seemingly convey his condemnation of the president. Conway was commenting on a tweet from the Washington Post's Philip Bump, in which Bump asserted that Trump's supposed policy of keeping unqualified employees because he likes that they praise him would never fly in the private sector. In response to Bump's thoughts, Conway offered some of his own, appearing to take a not-so-subtle dig at Trump without mentioning him by name:

Interesting analogy. Likewise, what if a CEO routinely made false and misleading statements about himself, the company, and results, and publicly attacked business partners, company 'divisions' (w/ scare quotes!), employees, and analysts, and kowtowed to a dangerous competitor?

These are just a few of many examples of Conway using social media to covertly or not so covertly criticize the president. Notably, as the Huffington Post reported back in March, prior to Trump's presidency, Conway was not very active on social media. Indeed, he wrote no tweets at all in 2015 or 2016 and only a handful in 2017. However, in 2018, his Twitter usage greatly increased. Conway posted 200 tweets and retweets in March 2018 alone (the month in which the Huffington Post's piece was published) — and nearly half of these could be considered critical of president Trump.

Overall, if his Twitter account is any indication, Conway does not seem to be a big fan of President Trump's — and Trump's controversial behavior in the wake of McCain's death is something of which Conway does not approve. As his wife, Kellyanne, continues to work for the president, it certainly seems that Conway will continue to seek to hold Trump accountable via social media commentary.