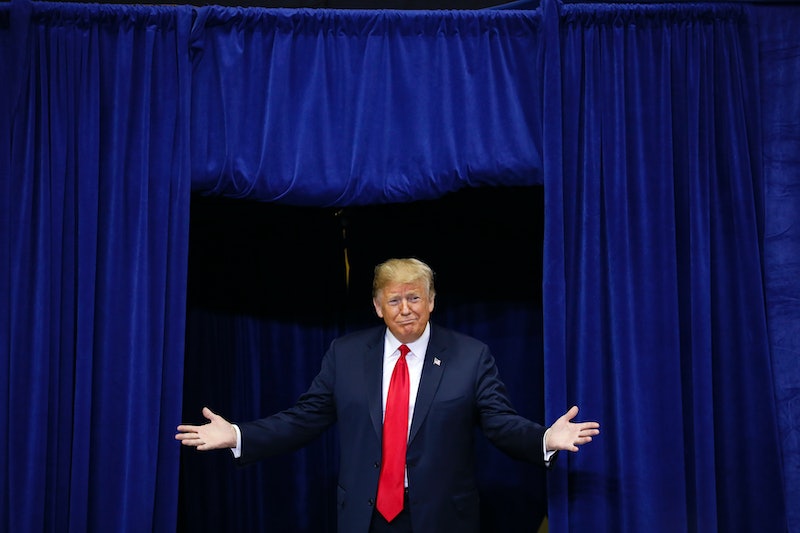 Kellyanne Conway might have spent the evening before the 2018 midterms campaigning with Trump for GOP candidates, but her husband seems to have been on a different page. Lawyer and noted Trump critic George Conway geared up for midterms by retweeting an article on how many false or misleading claims Trump has made during his presidency. It was just one of many posts he retweeted throughout the evening — and not the only one that subtly criticized the Trump administration.

Later on Monday evening, Conway retweeted another tweet by Haberman, which analyzed a quote by Trump in which he claimed not to know completely about the controversial campaign ad that has since been pulled from most major news networks and social media platforms.

Haberman wrote, "The president tweeted the raw footage used in the ad. He also in the past personally signed off on every ad and in many cases dictated the scripts. Hard to believe he didn’t know."

The strangely diametric political beliefs of Kellyanne and George Conway have long been a topic of speculation, but the lawyer's public activity seems to have grown in vitriol against POTUS in the last week. On Oct. 30, in the wake of stunning remarks made by Trump regarding his intentions to end the birthright citizenship policy in the United States, Conway penned an op-ed with fellow legal expert Neal Katyal to rip apart Trump's argument.

The fact that the two of us, one a conservative and the other a liberal, agree on this much despite our sharp policy differences underscores something it is critically important to remember during a time marked by so much rancor and uncivil discourse: Our Constitution is a bipartisan document, designed to endure for ages. Its words have meaning that cannot be wished away.

Meanwhile, Conway's wife has maintained her strong levels of enthusiasm for the Trump administration, and even went to Indiana on Monday evening to stump with POTUS for GOP Senate candidate Michael Braun.

For those wondering how the Conway marriage works, an August profile of the couple in The Washington Post gave a little bit of insight into the inner workings of the Conway household. Kellyanne said at one point, “I feel there’s a part of him that thinks I chose Donald Trump over him. Which is ridiculous. One is my work and one is my marriage.”

A perhaps even more telling piece of insight occurred when the couple talked to Washington Post reporter Ben Terris about Trump’s old Taj Mahal resort and casino, which is near their beach house. Kellyanne said, "It was wildly popular."