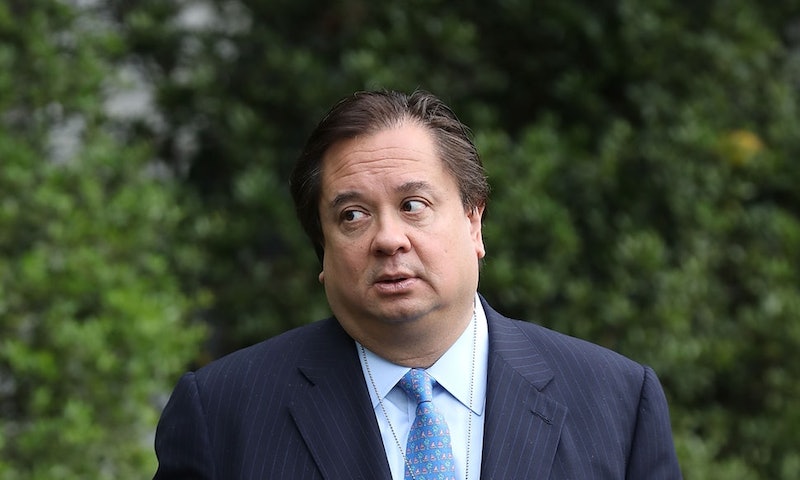 One of President Trump's biggest defenders is married to perhaps one of his biggest critics — and it's got to make for some interesting table conversation in the privacy of their home. White House adviser Kellyanne Conway's husband seemed to lambaste the president in a tweet on Tuesday, calling Trump out for false statements and public attacks. George Conway picked apart Trump's insults of Omarosa Manigault Newman with an analogy that might have resonated more with the president for its comparison to business behavior.

Conway's latest tweet is directed at Trump's reaction to Manigault Newman's bombshell claims in her new book Unhinged. Conway is a high-profile attorney who graduated from Harvard at the age of 20 and led the Federalist Society during his time at Yale Law. Now, he practices at a law firm based in New York City, though he's currently in Washington D.C. for his wife's work, Politico reported. But his chances at this point of any future government appointment under Trump are probably low: Conway has been tweeting messages critical of the president since 2017.

In a two-part tweet, Trump wrote, "Wacky Omarosa, who got fired 3 times on the Apprentice, now got fired for the last time. She never made it, never will. She begged me for a job, tears in her eyes, I said Ok. People in the White House hated her. She was vicious, but not smart. I would rarely see her but heard...." (continued below)

The president's tweet prompted a response from Washington Post writer Philip Bump, who asked how the CEO of a company with Trump's behavior would be received. Conway, in turn, built upon that analogy by bringing up more examples of Trump's past conduct.

Conway doesn't mince words here, implying the president makes "misleading statements" about the company and results, which are clear references to the White House and government effectiveness. He also rips into the president for his management of international relations, most likely referencing Trump's performance at his summit with Russian president Vladimir Putin, the apparent "dangerous competitor."

Trump's original tweet leading to Conway's response is one of many maligning his former White House aide. The release of Manigault Newman's book led to a defensive scramble in the White House press office, as officials denied and tried to explain some of the book's accusations. One of those accusations included an apparent tape from Manigault Newman's Apprentice days that shows Trump using the N-word. Trump has vehemently denied this claim, writing in a tweet Monday that "I don’t have that word in my vocabulary, and never have." According to ABC News, White House press secretary Sarah Huckabee Sanders said that she could not "guarantee" that President Trump has never been caught on tape using the N-word but offered an assurance, of sorts, that she had "never heard it."

This latest mess with Manigault Newman and the president is just one of many on which Conway has taken to Twitter to express his thoughts. Many are retweets, with a short sardonic comment attached. In 2018, the Huffington post counted about 100 tweets and retweets critical of Trump in the month of March alone, with his criticism leveled at a range of issues varying from Andrew McCabe's firing to the Dow's performance to the unpopular position of being Trump's communications director. Conway's heart may belong to someone who has consistently praised Trump, but this latest tweet shows his head is his own as his political split deepens publicly with each additional tweet.