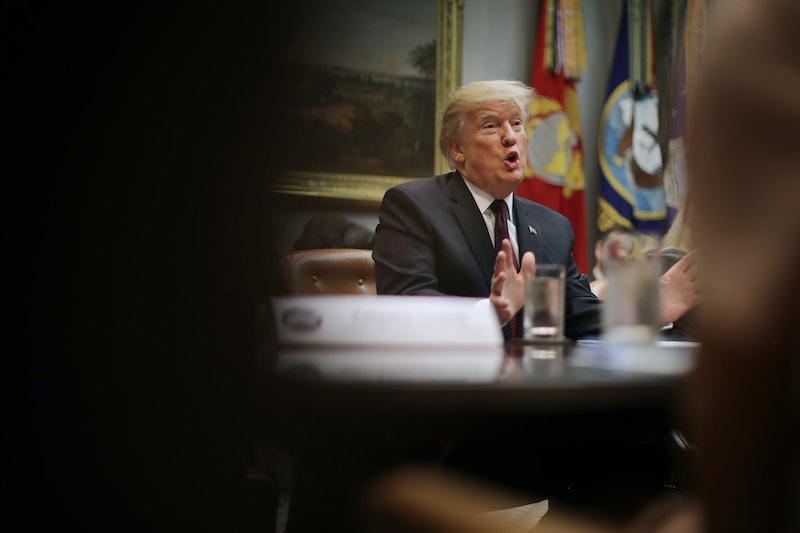 This far into the Trump presidency, the proposed border wall has taken on more of a symbolic meaning than a physical one. It's the subject of multiple shutdowns, a metaphor for heightened controversy over immigration rights, and recently, fodder for rhyming battles. On Thursday, George Conway responded to Trump's new wall slogan — a rhymed adaptation of his argument for the wall — with a little rhyme of his own.

"Without a Wall there cannot be safety and security at the Border or for the U.S.A. BUILD THE WALL AND CRIME WILL FALL!" Trump tweeted Thursday morning.

"reciting risible rhymes won’t get you a dime," Conway shot back at the president that evening.

Trump has repeated his wall/crime rhyme a few times now, and Conway was definitely not the only one to respond with rhyming mockery.

The president frequently invokes the crime argument when defending the border wall, insisting that unlawful immigration worsens crime. A 2017 Gallup poll shows that nearly half of Americans agree with Trump on this point, though statistics paint a different picture. In fact, recent reports from The Marshall Project and the Cato Institute show that immigrants tend to commit crimes across the board at lower rates than American-born citizens.

A 2018 study published in the journal Criminology by Michael Light and Ty Miller also showed that between 1990 and 2014, states with higher populations of undocumented immigrants actually had lower rates of violent crime.

Rather confusingly, Trump actually acknowledges that the country has historically low crime rates, but insists the wall is necessary all the same. "If we don’t do it, this country is going to be worse than at any time in our history in terms of drug infestation and in terms of crime," Trump said at a White House event on Wednesday, according to Vox. "And our crime numbers are very good."

Trump's conflicting statements come during the longest government shutdown in history — 35 days with 25 percent of the federal government shuttered due to a standoff over border wall funding. In the meantime some 800,000 federal workers are furloughed or working without pay and about to miss a second paycheck.

House Democrats have refused to pass a bill including the $5.7 billion Trump is demanding for the wall, and the White House won't settle for anything less. On Thursday, the Senate voted against a bill to reopen most of the government without providing wall funding, leaving the government no closer to reopening.

The Senate vote was still telling of shifting public opinion on the wall, however. Even though the measure didn't pass, six Republican senators ended up voting with Democrats to reopen the government without wall funding. According to The Washington Post, that crossover signifies that as federal workers increasingly feel the effects of withheld paychecks, the administration might be losing leverage on the issue.